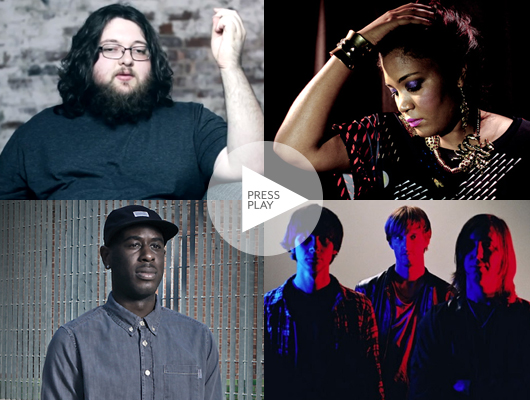 Where to begin with our batch of Press Play goodies for this week? Well, we’ve got videos, DJ mixes, brand-new original productions, and plenty of quality remixes from the likes of Cooly G, Fort Romeau, Jonwayne, Axel Boman, Groundislava, Dauwd, T. Williams, and Flume, among others. The bounty of Press Play‘s audio and video can be consumed after the jump.

Korallreven recently dropped the first single from its as-yet-unannounced second LP, and followed it up with a remix of the sun-soaked tune by UK club queen Cooly G.

Before he heads out on tour with Mosca, UK garage patron T. Williams post a stream of “Smile (feat. Tendai)” from his recent Feelings Within EP for PMR.

As it approaches complete cultural saturation, Drake’s brand-new “Hold On We’re Going Home” single got a trance-y and smile-inducing remix from Groundislava.

Applescal’s Atomnation label is set to release a new single from Olaf Stuut, and it comes with Dauwd’s excellent remix of “Siren.”

“Holdin On (feat. Freddie Gibbs)” is a brand-new version of a single from the upcoming deluxe edition of Flume’s self-titled debut LP.

With the stream of “Gateway” going online this week, we’ve now officially heard all three tracks from Tessela’s debut EP for R&S before it drops on October 8.

’80s R&B-obsessed Nashville duo Jensen Sportag is slowly leaking out tracks from its upcoming debut LP for Cascine, the latest of which is the moody and slow-grooving “Rain Code.”

George FitzGerald’s ManMakeMusic label is about to drop a 12″ from the producer known only as U, but before that record arrives next week, we can now hear two of its three shadowy, bass-laden cuts.