Plenty of top-notch music awaits all insatiable ears within this week’s edition of Press Play. […] 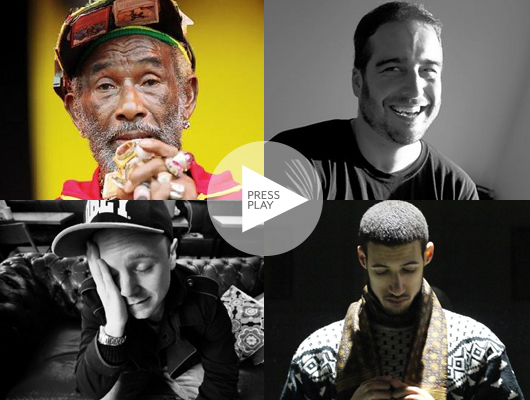 Plenty of top-notch music awaits all insatiable ears within this week’s edition of Press Play. […]

Plenty of top-notch music awaits all insatiable ears within this week’s edition of Press Play. We’ve got the lively sounds of Lee “Scratch” Perry, garage veteran Todd Edwards, and UK house up-and-comer Huxley sharing the spotlight with the likes of Hot Chip’s Joe Goddard, LA producer Sweatson Klank, and Jeremy Greenspan of Junior Boys, among others.. There are loads of streaming tunes, captivating videos, well-curated mixes, and more all waiting to be seen and heard, after the jump.

Before they release their collaborative record for Defected on September 30, Huxley & Shenoda have shared a preview of the two-track Chatsworth Sound EP.

Check out another moody cut from Visionist’s upcoming EP for Lit City Trax, the dark and grimy “Lost.”

One half of Junior Boys, Jeremy Greenspan posted his acid-y remix of Roland Tings’ “Tomita’s Basement” single for Club Mod.

The man behind such beautiful designs as the album cover for Gold Panda’s XLR8R Pick’d Half of Where You Live LP for Ghostly, Adam Gilmore is profiled in this quick video piece which takes a look at his creative process while the artist himself provides a bit of candid narration.

LA beatmaker Sweatson Klank dropped his Heading East EP this week, sharing a full stream of the music, too.

Here’s the video for Joe Goddard & Boris Dlugosch’s “Step Together,” a track lifted from Greco-Roman’s recently released We Make Colourful Music Because We Dance In The Dark compilation.

Mumdance’s brand-new Different Circles – Level Seven mix feautres tracks from Beneath, Logos, Shapednoise, and the DJ himself, among others.

Here’s E.m.m.a’s Lost Encarta Tapes mix of early work “inspired by the CD-Rom Microsoft Encyclopedia from the ’90s,” as well as tracks from her recently released Blue Gardens LP for Keysound.

Four Tet-affiliated band RocketNumberNine unleashed this surreal music video for its “Lope” single this week, presenting a colorful piece which matches well with its electro-acoustic sound.

Pharaohs shared its Limited Edition mixtape for Check Yo Ponytail over on SoundCloud, an offering which features tracks from Demdike Stare, Suns of Arqa, and other esoteric artists.