Seeing as how we’ve got some some unreleased jams, exclusive premieres, free downloads, one-of-a-kind DJ […] 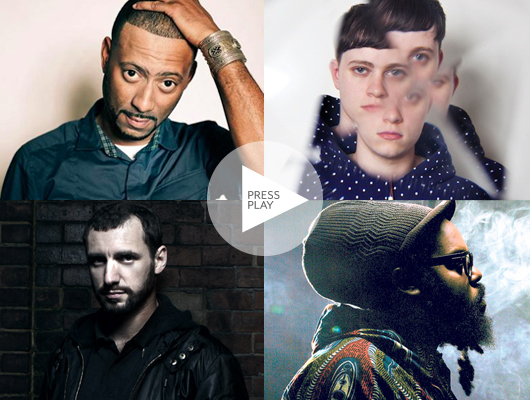 Seeing as how we’ve got some some unreleased jams, exclusive premieres, free downloads, one-of-a-kind DJ […]

Here’s a big collaborative tune from iconic LA beatsmith Madlib, who teams up with Freddie Gibbs and Karriem Riggins for the latest entry of Adult Swim’s singles series, “City.”

UK indie-pop darlings Bloc Party got treated to a top-notch remix of its new “Ratchet” single by Glaswegian badman Rustie.

Paul Woolford is dropping an EP under his Special Request moniker next week, the edgy and and jungle-centric Hardcore EP for Houndstooth, which arrived as an early stream along with remixes from Anthony Naples and Lee Gamble.

SoCal space cadet Ras G is giving us the premiere of a new tune from his the forthcomingBack on the Planet LP for Brainfeeder, the off-kilter and cosmic “_G Spot Connection.”

The mixtape that everyone can’t stop talking about, Arca’s wildly inventive, 25-minute &&&&&—which is chock full of strictly the artists own productions—has now found its place on XLR8R.

For seemingly no reason at all, LA party-starter Samo Sound Boy shared his “Spirit Tool” tune with the internet this week.

There’s no lack of sunny and wistful music coming from Sweden at any given time, but Ditt Inre’s brand-new “Vi kommer aldrig bli som er” might just be some of the best.

Burgeoning Brooklyn producer Hank Jackson is about to release his debut 12″ via Mr. Saturday Night, and the hard-edged “Deposit” is one of its three spicy tracks.