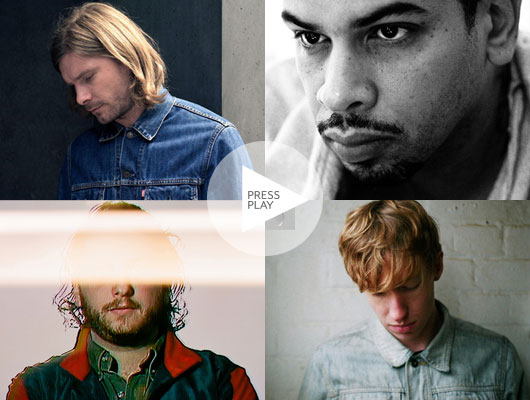 Though we’ve listed some excellent names in the headline of this week’s edition of Press Play, those DJs and producers aren’t the only top-shelf talent we’ve got fresh tunes from today. There are also some contributions from artists like Nautiluss, Tim Hecker, Lee Foss, Nguzunguzu, James Ferraro, Vondelpark, and Kingdom, among others—the whole pack delivering a load of originals, exclusive premieres, album streams, DJ sets, and more. Give it all a listen after the jump.

Berlin techno mainstay Marcel Dettmann went ahead and quietly announced his next record for Ostgut Ton, offering previews of each of the four tunes that make up the Range EP.

Hot Creations boss Lee Foss and house veteran MK continue to tease their fans with a preview of their forthcoming collaborative EP.

Before he appears at Fabric tonight, breakout London DJ/producer Daniel Avery is premiering a fresh tune from his forthcoming Fabriclive 66 mix album (out on November 19) exclusively on XLR8R.

Here’s a two-and-a-half-hour mix from the LA-based Fade to Mind crew—including B2B sets from MikeQ, Kingdom, Nguzunguzu, and Total Freedom—who are also set to unleash their showcase tonight at Glasslands as part of Brooklyn Electronic Music Festival.

The man behind the recently released and XLR8R Pick’d Habitat EP (listen to it here), Canadian techno DJ/producer Nautiluss, dropped the latest podcast for Teshno, with plenty of unreleased exclusives and top-notch tunes.

Almost immediately after T. Williams dropped his Pain & Love EP via PMR, the UK artist is back with another single for the label, called “Dreaming.”

Check out this video of a live performance from Wool, who jams through a six-minute rendition of his “Rock Opera” and “Purple Ohm” tracks using entirely hardware and no computers.

Shapeshifting musical oddball James Ferraro shared a full stream of his new Sushi LP for Hippos in Tanks, once again proving you never know what to expect from the prolific experimentalist.

Before Thefft’s two-track record for MadTech drops on Dec 3, you can preview sizable clips of both bass- and drum-heavy productions.