Today’s edition of Press Play reads more or less like the lineup for a top-notch, […] 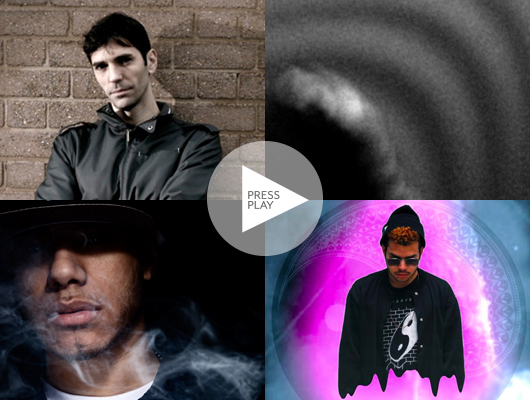 Today’s edition of Press Play reads more or less like the lineup for a top-notch, […]

Today’s edition of Press Play reads more or less like the lineup for a top-notch, international electronic music festival, as it’s chock full of artists from around the world who dabble in just about every subgenre imaginable. We’ve got the techno/dubstep hybrids of Martyn, the handmade MPC beats of AraabMuzik, the dusty house sounds of Jacques Renault, Bandshell’s shadowy techno experiments, the effervescent South African house of DJ Spoko, D33J’s blunted beatwork, Throwing Snow’s shapeshifting UK bass, and much more Pink Skull, Evenings, Zhou, and others. You can give it all spin after the jump.

Before it debuts on March 8 at the STRP Biennale in The Netherlands, check out the trailer for Martyn’s The Air Between Your Words live A/V show.

Here’s our second taste of the forthcoming second EP by UK technoist Bandshell, the soft-edged and hypnotic “Perc.”

MPC wizard AraabMuzik teases at his next mixtape, For Professional Use Only, with the heavily percussive “The Prince is Coming.”

You may have seen this video on the internet before, but today, we’re premiering the extended cut of Wedidit beatmaker D33J playing “Always There” for Into the Woods‘ Carsick series.

This interview with Berlin resident Deepchild finds the DJ/producer talking about his background (or lack thereof) with electronic music and what brought him to immersing himself in the sights and sounds of the genre.

Check out snippets of each track from Pink Skull’s upcoming Braindance EP for Throne of Blood, including a remix from Jacques Renault.

After announcing that he’d signed to True Panther for his first ever western release, DJ Spoko gives the world its first taste of his Ghost Town EP with the buoyant sounds of “Batauweng (ft. Kapa Kapa).”

Berlin DJ/producer Baumecker (of Barker & Baumecker, naturally) uploaded this massive, four-hour live mix from a recent appearance at Panorama Bar, which is more or less his love letter to the art of opening sets.

After we shared the icy techno of Moiré’s “Into,” here are some genuinely trippy visuals for “Lose It,” another cut from his new EP for Actress’ Werkdiscs imprint.

Cardiff DJ/producer The Organ Grinder already gave us the patient, glassy house soudns of “Black Microdot,” and now, he’s sharing a clip of another very solid production from his harddrive.

Virginia-based newcomer Evenings arrives with his “Friend [Lover]” track from the forthcoming Yore LP for Friends of Friends.

Part of Bristol’s Young Echo crew with the likes of Vessel and Khan, Zhou previews its 12″ for Peverelist’s Punch Drunk label, the haunting and bass-focused “Locust Tree” b/w “Locust Dub.”