This week’s edition of Press Play has all kinds of remixes, videos, DJ sets, and […] 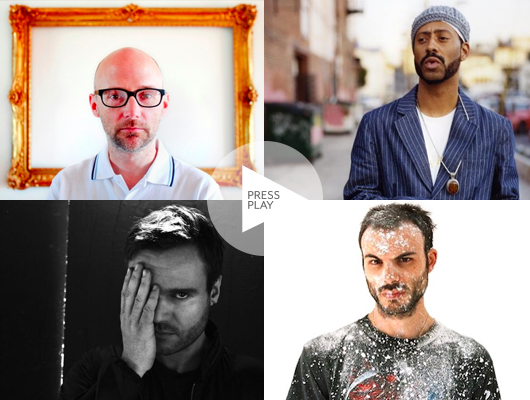 This week’s edition of Press Play has all kinds of remixes, videos, DJ sets, and […]

This week’s edition of Press Play has all kinds of remixes, videos, DJ sets, and other assorted premieres from remarkably talented artists across the spectrum of electronic music. After the jump, you’ll find sights and sounds from the likes of Madlib, Moby, JD Twitch, Na of Nguzunguzu, Vladislav Delay, Outboxx, L.I.E.S. affiliate Beau Wanzer, and Joakim, among others. It’s quite a bit to take in, so we suggest that all interested parties get to clicking those play buttons ASAP.

This blunted, lyrical track comes from the collaborative efforts of preeminent LA producer Madlib and MC Freddie Gibbs, and is lifted of the pair’s Deeper EP, which is out later this month.

The DJ/producers of Toyboy & Robin took it upon themselves to remix the latest Tensnake single, “See Right Through,” delivering this skipping and bubbly version of the pop-infused cut.

Longstanding French producer Joakim is premiering his new video for “Another Light,” another mesmerizing collage of bright, lo-fi imagery in the same vein of his recent clip for “Heartbeats.”

Soon after his announcement of a new label and moniker (both called Ripatti), veteran Finnish producer Vladislav Delay shared this recording of a recent live set at Poland’s Tauron New Music Festival.

Rising Bristolian production duo Outboxx is dropping an EP called The Fade via local label Futureboogie, but before it arrives next week, the pair has shared sizable previews of its four slinky house cuts.

Here’s a brand-new mix from young DJ/producer Howes, who collected choice cuts from the likes of Luke Abbot, Minilogue, Terekke, and Marshall Jefferson for his 43-minute set.

Berlin producer Kyson remixed “Bizarre” by Perera Elsewhere, smoothing out the song into a patient slice of atmospheric beat-pop.

Beau Wanzer’s self-titled 12″ for L.I.E.S. will appear later this month, and the clattering “Balls of Steel”—for which this mangled piece of video modulation was created—is that record’s closing track.