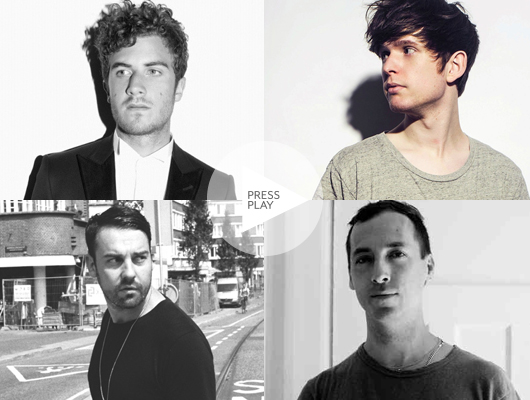 We feel pretty confident about the selection of sights and sounds featured in the latest edition of Press Play, as it includes all kinds of remixes, record streams, videos, free downloads, and fresh original productions. Not to mention that it all comes from remarkably talented artists across the spectrum of electronic music, such as Madlib, Tim Hecker, James Blake, Teengirl Fantasy, Nicolas Jaar, Factory Floor, Breach, and Jerome LOL, among others. It’s a whole lot to take in, so we suggest that everyone gets to clicking those play buttons ASAP.

This smooth, cinematic clip arrived this week for James Blake’s version of “Life Round Here” with Chicago MC Chance The Rapper.

Breach’s “Grey Matter” is an exclusive tune which the artist produced for his part in a collaboration with documentarian Winstan Whitter, skater Lucien Clarke, and Sony Walkman’s new 3-in-1 WHSeries.

Speaking of Breach, his recent “Everything You Never Had” single with Andreya Triana just got remixed by drum & bass stalwart DJ Die, who named his version the “Back to ’97 Remix.”

The same week Tim Hecker released his astounding Virgins LP via Kranky, it was discovered that the Canadian artist also wrote an original score for an upcoming documentary about a group of miners who were murdered in an anti-Chinese immigrant massacre in Oregon in 1887, called Massacred for Gold. This is the trailer for that film, featuring what is presumably part of Hecker’s soundtrack.

Before it drops as part of Abstraxion’s “Moon” single for the Have a Killer Time label, UK trio Factory Floor shares a stream of its driving, acid-soaked remix.

Seemingly out of nowhere, Brooklyn duo Teengirl Fantasy posted a free download of its beat-driven remix of Dent May’s “Let Them Talk” single.

We’re pretty sure this isn’t a joke: Jerome LOL of LOL Boys fame teased a forthcoming EP with this tender, vocoder-heavy cover of “Yellow” by Coldplay.

Little known Barcelona artist Lucrecia Dalt released her Syzygy LP this week via Human Ear, and posted a full stream of its music online for all to hear.

With Halloween on the way, up-and-coming NY label Styles Upon Styles has a special 12″ in the works from Brooklyn’s Certain Creatures, the first taste of which comes in the form of this creepy video.