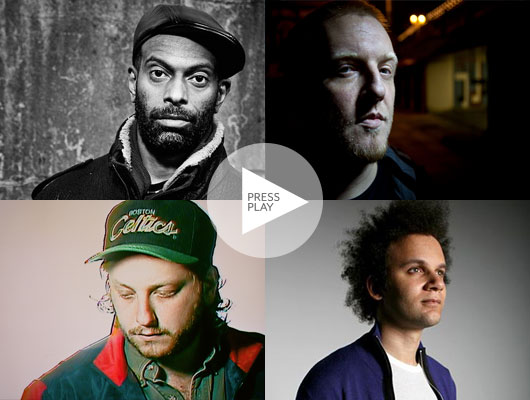 Where to begin with our batch of Press Play goodies for this week? Well, we’ve got some classic Detroit magic courtesy of Theo Parrish, a never-before-heard proper choon from UK garage stalwart Zed Bias, the bubblin’ first single to drop via Bicep’s new label, a bit of spacey synth-funk from B. Bravo & Teeko, Tyondai Braxton’s wild reworking of Philip Glass, the new EP from Nicolas Jaar collaborator Dave Aju… You get the picture. Dive into the bounty of Press Play’s streams and downloads after the jump.

Legendary Detroit DJ/producer Theo Parrish shares his 15-minute reworking of The Invisible’s “Generational” tune before it drops on October 15 via Ninja Tune.

Experimental electronic composer Oneohtrix Point Never unveiled a stream of his new split LP with fellow noisenick Rene Fell, Music for Reliquary House / In 1980 I Was a Blue Square.

Check out the second galactic G-funk cut to leak from B. Bravo & ‘s forthcoming The Starship Connection EP for Frite Nite.

Bristol’s resident dark-techno experimentalist Vessel unleashes another of his unearthly concoctions from his debut LP for Tri Angle, Order of Noise.

After we premiered Lemonade‘s “Softkiss (Anthony Naples Remix)”, John Talabot collaborator Pional dropped his own version of the emotive tune to stream and download.

Nicolas Jaar collaborator and San Francisco musician Dave Aju gives the world a chance to listen to the entirety of his debut EP for Matthew Herbert’s Accidental label, the Listen to Your Heartbeat EP.