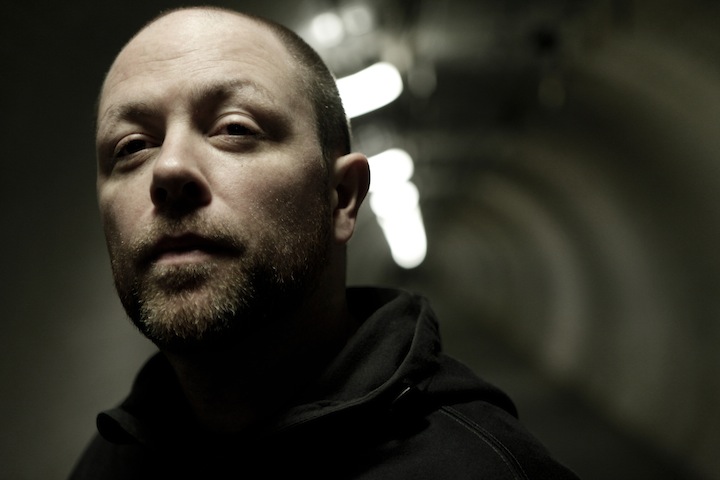 Tune into digital-radio station NTS late on a Wednesday night, and you’ll be greeted by what sounds like a fractured, cut-and-paste jingle. It’s the sort of program opener that a morning drive-time host might adopt—if that host were just a little bit crazed. But that demented goofiness does nothing to prepare you for the fierceness that follows on NTS’s Run It Red show—that’s because it’s hosted by Ben Sims, the U.K. techno powerhouse who’s been hammering out his no-nonsense, tough-as-nails rhythms for almost two decades. He’s one of the scene’s best-known figures, and he’s one of its busiest as well: Besides hosting Run It Red, he’s a hugely prolific producer and one of its hardest-working DJs, purveying his three-deck magic at clubs and festivals around the world. But Sims wasn’t too busy to take a phone call from XLR8R, and he happily conversed about the relationship between hip-hop and techno, the North American scene, spinning in front of his idols, and plenty more.

I love those slightly silly intros to Run It Red. Are they an effort to make your sets a little more warm and cuddly?
That’s something I used to do with mixtapes, and even with a few mix-CDs that I’ve put out. That sort of cut-and-paste thing kind of harks back to when I was younger, back to my hip-hop days. Initially, when I started doing the shows on NTS, there wasn’t any of that; it was just turn up and go through a load of tracks for a couple of hours. Now I’m prerecording it and spending a little more time on them, so I thought it would be good to reintroduce that side of me. And I don’t want the whole thing to be too serious.

The music itself is pretty serious though, and throughout your career, your sound has generally been on the tough and uncompromising tip. What first attracted you to that sound?
I guess that comes from the hip-hop thing, specifically that aggressiveness and energy that it had. That’s what attracted me to hip-hop. But as much as the music itself, it was the aggressiveness of the deejaying. I really liked that and took it to heart. Even when I was classed as a house-music DJ in the late ’80s and early ’90s, and I was playing softer, more melodic tracks, I was attacking it like a hip-hop DJ—which didn’t really make much sense. But it made sense to start doing energetic techno. For me, it’s a logical procession. The way that this techno is primarily loops and layers—some of them don’t even feel like finished tracks, just rhythmic ideas—is similar to cutting up two copies of an old funk record, as you would in hip-hop. There’s a strong link there for me, and I try to keep that alive in what I do.

You’ve been playing in North America a bit more often lately. Do you think that the general clubbing population here is more accepting of your style of techno than they once were?
It’s been interesting to see how the scene’s kind of changed. Like when I recently played Stereo in Montreal; there were a lot of heads down, with people getting really into it. There was almost a Berghain, four o’clock Sunday afternoon kind of vibe. And I just played Output in New York, which is a great space with a great sound. I’ve been coming to New York for a long time, and in the past there never were clubs like that where techno was appreciated, which says something. There’s a lot more interest.

You’ll be playing Detroit’s Movement festival this May. Do you feel any additional pressure to prove yourself when you play in Detroit?
This is actually the third time I’ve played the festival. There is some pressure, I guess; it is the birthplace of techno, after all. I actually came over for the KMS 25th-anniversary event a couple of years ago, and that felt like a crazy amount of pressure. Kevin [Saunderson], Derrick [May] and the rest of those guys were there, and I was so fucking nervous the whole time. But it was great, and I think it’s very important for me to keep links with the place where it’s all from.

You and Kirk Degiorgio have an ongoing night called Machine. What can you tell us about that?
I’ve known Kirk for quite a while, and came up with this idea to do something that focuses on playing just new music and featuring new acts. We’ve been doing that about four years now—and I think that back then, there wasn’t such a boom in techno and there weren’t as many new faces coming through the doors of clubs, so we wanted to do something that might fight against that a bit. We started out quite humbly; the first one was me, Kirk and Luke Slater playing at a venue for perhaps 250 people. We’ve slowly built it up and moved it around to different clubs in London, and now we regularly do it at Corsica Studios and Fabric. And we’ve taken it around the world: I just did one in France, we’ve taken it to Bangkok and Singapore, and at the end of this month I’m doing one in Rome. We’re doing about five a year in London, and another two or three a month at various spots.

After 17 years, you recently closed up Theory Recordings. Why is that?
There are quite a few reasons, but the main one is simply that it’s been going for quite a long time. I’ve found that I get very excited by all these new artists and labels and projects that are around—but I’m slightly less excited about labels that have been around since the ’90s. If I’m in a shop, would I listen to a record from a label like that? Would I be as excited as I am about a release on a label I’ve never heard of that says ‘001’ on it? Probably not. Also, it been hard to keep it going; I think it’s survived three or four distribution companies going bust. It’s been a rollercoaster of emotions. I mean, I think it’s been musically stronger than ever over the past 18 months or so, but I wanted to end it on a high. I think the upcoming focus will be to work on a lot of new music and give it to labels that I like, and maybe do some more collaborations as well.

But as one door shuts, another opens. You’re resuscitating the Symbolism label, right?
Yes. Symbolism was one of the three labels that went down because of the distributors going bust and I realized, fuck, I can’t carry on with these anymore. Looking back at its back catalog, I’ve realized how happy I was with it. And there was definitely a couple of Symbolism projects that were never completed, and I going to go back to them. There will definitely be at least five or six more Symbolism releases, and we’ll see how it goes. And now that I’m not focusing on Theory, I’ll actually have the focus to do it.

“If I stopped deejaying, I don’t think I would have the need to make new music at all.”

Is it true that you largely produce in order to have music for your own DJ sets?
Yeah, I’m not a musician at all. I’m a D.J And most of the time, that really is what I’m aiming for. I’ll go to the studio during the week and try and make tracks that I can play on the weekend. There are plenty of people who produce, and then built a DJ career after that; I’m completely the other way around. If I stopped deejaying, I don’t think I would have the need to make new music at all. Deejaying is my overriding passion, and I make music because of that.

Your studio got robbed last year. That must have put a damper on your production chores.
That was a pain in the ass! It came at a time when I was moving out of my previous studio, which was just around the corner. I had been there five or six years. I had had enough of being there; it was in a basement, and it was a bit dark and a bit damp. Particularly when I was making my album, when I was basically stuck down there for three months without any air or any fucking daylight, it wasn’t ideal. I realized I needed to move somewhere that was a bit better, and found this place that was above ground and had windows. But that also made it more accessible for people to break into. [laughs] Luckily, I didn’t have my records there, and they didn’t take any of the rare stuff; they mostly took the shiny stuff. The 303s and stuff like that, they just dropped them on the floor because they probably thought they were shit.

Other than yourself, what other artists tend to find their way into your sets?
There are a lot of artists who are staples, people who I’ll always be carrying with me: Mark Broom, Paul Mac, Rolando, Jeff Mills, Robert Hood…and a lot of others, really. Something I’ve found fascinating over the past couple of years is where people coming over from different genres are coming from. Producers are coming over from the bass scene, for instance, or what used to be the minimal scene, or the tech-house scene. They’re like, “Oh, I feel like toughening up for a little while.” Then they’ll do that for about three releases, and then go off and do something else that has no relevance for me. So there are lots of artists who I’ll play a lot, but only for a really short period.

Other than the Symbolism relaunch, what’s next on the agenda? Another album, perhaps?
I did actually start working on one in the old studio. It was one of the last things I was doing there before I moved out. But in the end, it was just a lot of tracks that I liked; if you put them together, it wasn’t really an album. Otherwise, I’m just going to be working on music for other labels that I like. The great thing is that now I don’t have to constantly be feeding Theory. I’m very proud of that label, and it’s what people associate me with—it comes after my name on nearly every flyer. But it is nice to realize, oh, it’s not there any more—time to do something else! It makes me feel a bit more alive, really.