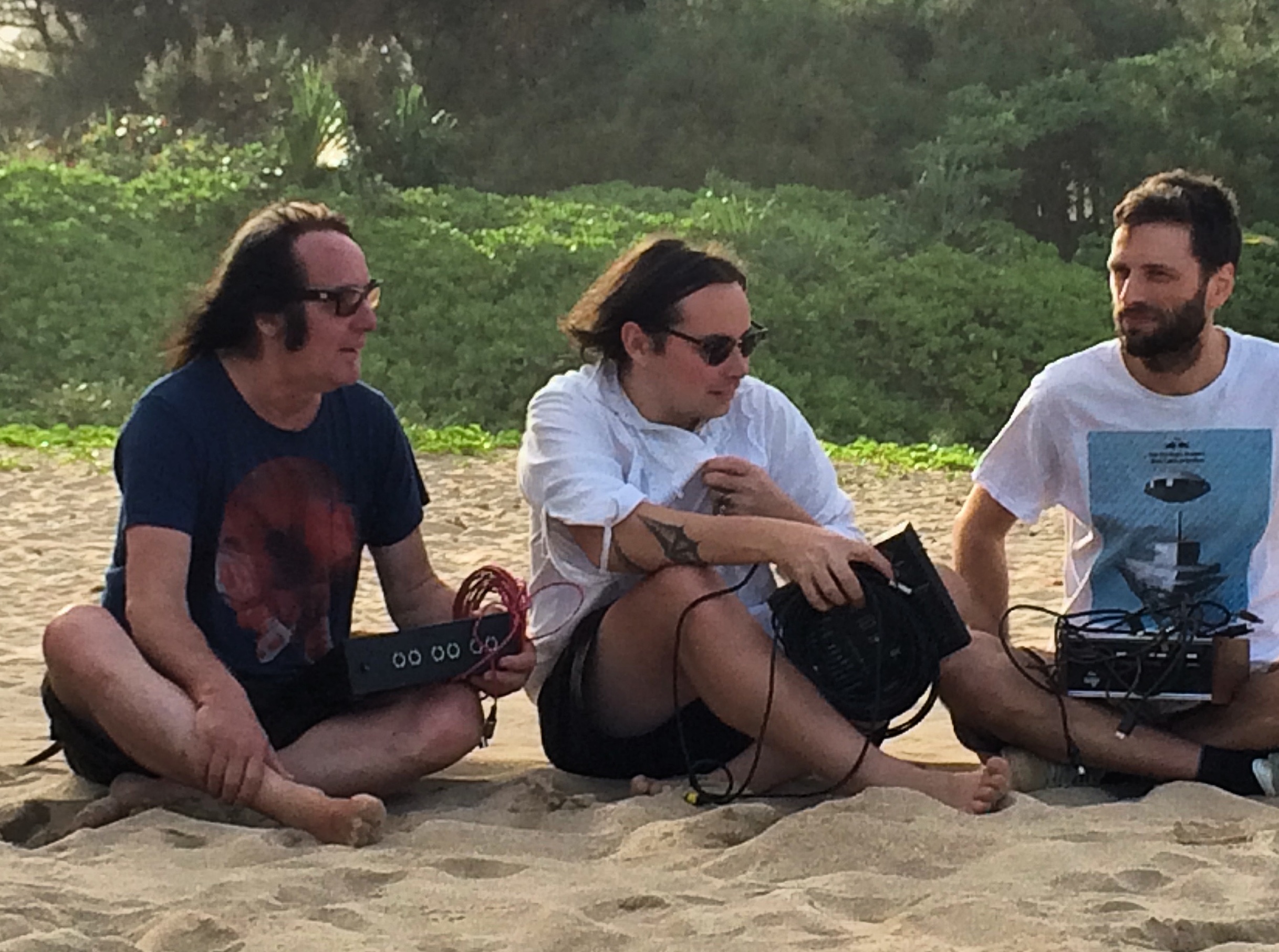 An album that features Hans-Peter Lindstrøm in collaboration with Todd Rundgren and Emil Nikolaisen might seem, at first, like a fully crazy idea. After all, Lindstrøm broke thorugh with the kind of soaring synthesized disco that has helped to define the club music of this millennium; Rundgren, active since the ’60s and still going strong, is most known as the venerable pop maestro behind such classic gems as “Hello, It’s Me,” “I Saw the Light,” and the Laura Nyro-esque “We Gotta Get You a Woman“; and Linsdstrøm’s fellow Norway native Nikolaisen, from the band Serena-Maneesh, tends to favor a squalling, swirling, “rock & roll chamber of magic” (as he’s put it). But think about it again, and it begins to make sense: Lindstrøm’s 2012 LP, Six Cups of Rebel, was a dizzying and dense set of progressive electronics, while for much of the ’70s, via albums like A Wizard, A True Star and Initiation, along with early work with his combo Utopia, Rundgren was one of the standouts of the then-burgeoning progressive-rock world—making them both well-suited to mesh with Nikolaisen’s tripped-out sonics.

It’s an idea that’s so crazy, it just might work—and thus, we have the trio’s sprawling Runddans, a utterly unhinged joyride of an album, with Rundgren’s mellifluous vocals and shredding guitar anchored by the maximalist glee of Lindstrøm and Nikolaisen’s studio shenanigans. On the eve of the album’s release—it comes out May 5 on Smalltown Supersound—we reached Lindstrøm by the phone at his Oslo home.

Had you been a Todd Rundgren fan before this project began?
Not really—I wasn’t very aware of his music at all. Actually, I think I always used to get him mixed up with Nils Lofgren! To me, they were both just kind of like these ’70s American music guys, and I didn’t really pay attention. That wasn’t really my thing.

But you had discovered him at one point—in interviews when Six Cups of Rebel came out, you name-checked him as one of the influences for that album.
Yes, I did finally discover him, and I was happy that I did. I really respect both his experimental side, and his beautiful pop-music side. And when he combines those two, in one album or even one song, that’s when he’s the best. Some of his mid-’70s albums are pretty amazing. They are a great mixture of experimentation and beautiful songwriting.

Have people seemed surprised when they find out about this collaboration?
When people have been asking what I’ve been doing, I tell them that I’m collaborating with Emil Nikolaisen, and most Norwegian people actually know who he is, and they regard him as a really respected musician. But most Norwegians don’t really know who Todd Rundgren is—so I guess they are not really surprised. [laughs] They’re like, “Todd who?” Some music heads do know him, though, and for them it does seem to make sense, at least if they think about it a little bit.

What was the genesis of this project? I’m guessing that you and Emil already knew each other, and Todd had done that remix of “Quiet Place to Live”—but it’s a big step from that to doing an entire album together.
Yeah, you’re right! The remix was really the start, though. Before then, I didn’t know Todd at all, and Emil didn’t know him either. But after the remix, three years ago, Smalltown Supersound invited him over to give a lecture at this music conference that happens every February. He ended up doing some live shows when he was here, and he also wanted to do some work in the studio, and so we proposed that we all meet in the studio. This was nothing very planned—he was just up for doing something. Emil and I prepared a couple of things for us to work on—and it just took off from there, really. But in the beginning, we were really just fooling around. After we started working on it, we thought we might have something more. We started visualizing it as an album with a lot of drama, one that tells a story.

That was three years ago? I had no idea that this album was so long in the making.
I think that the length of time it took benefited the album. Todd is living in Hawaii, and Emil has been working a lot in the U.S., so there was a lot of sending files back and forth. And there was a lot of trying different things, and a lot of cutting and pasting—which I guess you can here on the final result. [laughs] But because we spent all that time, we ended up with a lot of really interesting postproduction stuff. A lot of that happened in the last year…and even in the last month.

There might have originally been a lot of files—but you are presenting this as one long track, split into different sections.
That’s right. It’s really one piece of music, but we did have to split it up into smaller pieces in order to be able to look at it more clearly. We tried to make it as interesting as possible.

You’ve certainly succeeded with that. What’s the reaction been like so far?
I haven’t really played it to too many people yet, just a few bits and pieces here and there. The reaction to that has been good, but I think you really have to hear the whole album to get the full effect.

And you really have to listen to it to get that full effect. It’s definitely not background music.
Yeah, it’s not the kind of album that you put on and do some work while it’s playing; you really have to concentrate, I think. And you’ll get different things out of it every time you listen—there are a lot of musical references to Todd’s past, for instance, and all kinds of things that are important to us, and that we hope listeners will enjoy as well. So, basically, it’s serious listening music.

The record definitely comes across as an amalgamation of your various sounds, too. One can hear a lot of Utopia-era Todd in there, along with parts that sound a bit like his A Wizard, a True Star period; one can hear both your cosmic-disco side and your Six Cups of Rebel side; and then there are influences from Serena-Maneesh I there as well.
We did want to make the album sound like it was equal parts, Todd, Emil and me; we wanted it to be perceived that way from the start.

You mentioned before that you wanted the album to tell a story. Can you explain what that story is?
I think you’d really have to ask Todd that one! He’s the one responsible for the words. But Emil and I thought about the album as being a life cycle, from birth to death. And the chords are constructed that it’s cyclic so that the last chord in every section is the same as the first chord in the next section. So basically, it’s about cycles. [laughs] But Todd has said that he regards it as the beginning and end of all music, or something like that. But personally, I always like to leave interpretation to the listener, rather than try to explain it.

What was Todd like to work with?
He was totally amazing, like the greatest guy ever. He’s really positive. He still looks forward, rather than just looking back all the time—which is amazing for somebody who’s been doing music as long as he has. Emil and I actually got to go to Hawaii a few months ago, and got to spend a lot of time with the Rundgrens, which was such a nice experience.

He’s has such a way with a melody, and though I’m not sure who was responsible for the melodies on this record, they really shine on this release.
That was him. I’m really happy with the way that worked out. The catchy melodies, if you can say it like that, work really well against the weird, experimental music that backs it. And that’s the way I think about Todd Rundgren—pop melodies and experimental music. And it’s the same with Emil. If you listen to his music, there’s usually a really nice pop song as the core element of a track, but there’s always a lot of noise and weird stuff, too. He’s an amazing musician. They’re both big heroes of mine, and it was an honor to work with them.

And they might feel the same about you, I suspect.
I’m not sure about that…but I do hope there is mutual respect, at least. [laughs] We’re all extremely happy with the way the record came out, and I really think it’s the thing that I’ve done that I’m most proud of.