The rising London-based DJ-producer explains why freedom on the dancefloor is a fast fading liberty. 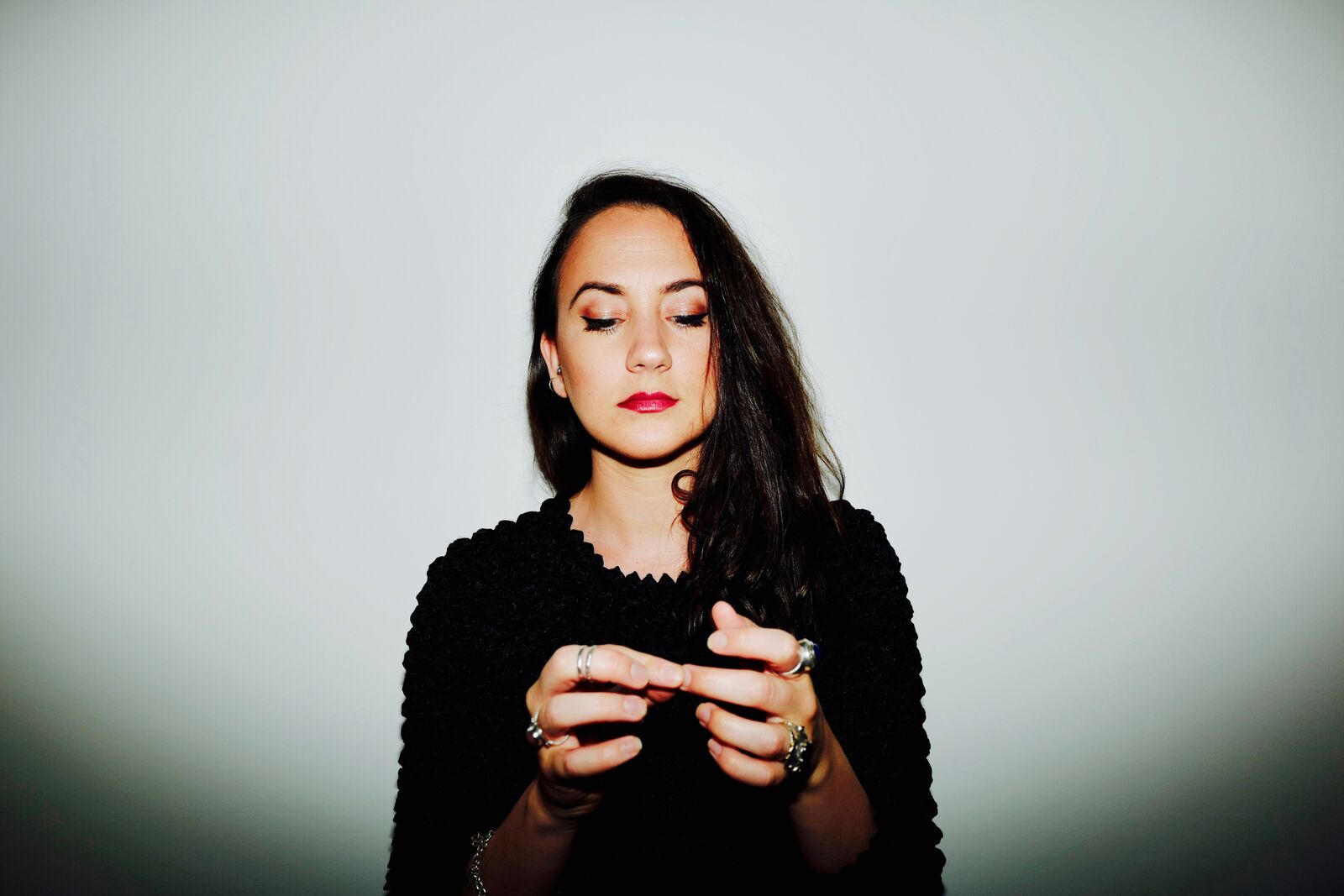 The rising London-based DJ-producer explains why freedom on the dancefloor is a fast fading liberty.

Ceri’s journey into the world of electronic music has been underpinned by a determination, dedication to her craft, and a deeply ingrained passion for music. Having immersed herself in electronic music and spent most of her teens at London’s The End and fabric, she began yearning to play the music she loves to packed dancefloors. Since those formative years, not only has she already played at fabric several times, but she has also traveled, spinning as far afield as the USA and DC10 in Ibiza as well as countless performances across the UK and the rest of Europe.

Renowned for her dark and sultry style, Ceri is a versatile selector who is just as skilled in the studio and can now add fledgling label owner to her repertoire. Earning her stripes with a number of DJ residencies in the capital, it’s Ceri’s residency for Jaded, London’s most infamous and longest running after-party, that she holds dearest to her heart. After regularly playing extended sets at the after-hours party for five years, she was asked to be an official resident, curating Room 2 at their Corsica Studios base, where she expertly cultivated a dark, narcotic, and lucid atmosphere to soundtrack the hazy after-hours environment.

Her skills in the studio have been acknowledged with support from the scene’s most influential figureheads, with releases on a variety of respected underground labels. Ceri is now launching her own label, Find Your Own Records, with a focus on showcasing house and techno that stays true to the music. The first release features two original tracks from Ceri with a remix from Fred P.

For this month’s Real Talk, she steps up to explain why freedom on the dancefloor is a quickly fading liberty.

On my first trip to Panorama Bar many years ago, I was really excited to hear Fred P. I had loved his music for some time but it was the first time I heard him DJ in person. His melodic take on techno, his deep dubby house, and his impeccable work as Black Jazz Consortium and other aliases, have always stood out for me as timeless classics. His set was a more energetic and “housier” than I had expected but a perfect fit for the setting and the people there. At one point he dropped the famous classic, Lil Louis “French Kiss,” which obviously sent everyone wild. Later, I felt the need to pull my top over my head and flash my boobs at the other dancers. It was my way of expressing the feeling of being totally liberated, in a club where you are free to do almost anything you want.

After that night, I began to think about freedom on the dancefloor and what that means in today’s society; where self-expression, femininity, and sexuality can often be limited by our belief systems and societal “norms.” With the discussion around boundaries and sexual harassment so prevalent right now, this is a closely linked subject that should also be spoken about.

No one at Panorama Bar batted an eyelid when I flashed them, for Berghain / Panorama bar is world famous as being a permissive and highly inclusive venue, where you truly can lose yourself to the music and even get naked if you want to.

“Flamboyance was celebrated, music was the catalyst behind endless nights of unbridled expression.”

If we begin by going backward, to the roots of dance music culture, most people will be aware that it began on the dancefloors of clubs in the USA—Chicago, Detroit, and New York. At a time when society was much more segregated, the parties were diverse; black, white, latino, gay, straight—it really didn’t matter. The clubs were spaces where you could go and be yourself, or take on a whole new persona if you wanted. Flamboyance was celebrated; music was the catalyst behind endless nights of unbridled expression.

In a lot of these places, the house music clubs could be found in the rough parts of town, where they could operate with autonomy. It was a fringe movement, nothing like the homogenized global culture it has now become. House and techno clubs were where people went for escapism: Music Box, Paradise Garage, Zanzibar, the Sound Factory and more became safe spaces for anyone who was a bit “different” and wanted to express themselves out of sight of judging eyes. This is where club culture is anchored. It was politically and culturally of great significance, paving the way for all that exists now.

Today, clubs remain a place of escapism. There is no doubt that most eager ravers constantly yearn for the next party so they can let loose, forget about their day-to-day stresses and enter a place of contentment by the end of the weekend. But finding places where that original spirit remains has become harder, for numerous reasons.

After that ecstatic Fred P moment, a friend and I ventured downstairs to check out Berghain’s infamous dark rooms. We ran out after about 30 seconds and bumped into a guy who approached us with a warm friendly smile on his face and said quite candidly: “Hello ladies, do you want to give me a blowjob?” We declined immediately and he replied, “Ok, no worries, have a good night.” Now, to some people, this may seem shocking, but the way he asked was extremely respectful, and our rejection was received in good spirits. Neither party left the encounter feeling violated or hurt.

The club’s ethos is based on good manners and respect of people’s boundaries, allowing people to express themselves with as much freedom as they want, as long as there is an inherent respect for others and their boundaries. This is what we need to educate people about, not just in clubs but in society as a whole.

If you add those factors to the issue of patriarchy and the sexualization of the feminine form you sometimes have a really dangerous, regressive mix of influences. If I were a man, I could perhaps whip my top off in the middle of a dancefloor and party all night without a single person trying to chat or feel me up, or viewing me as an object of desire. As a woman though, taking one’s top off in the throes of musical passion has almost immediate sexual connotations to most people, because of the way in which women’s bodies are portrayed across the media, from pop stars and models to advertising, television and so on…

Sadly, it’s rare that I ever feel comfortable enough in a club to allow myself to let go and enter a space of sheer exhilaration to the point where I’ll remove my top. At the core of this is the fear of attracting unwanted attention, which is already a big enough issue before you’ve even considered letting loose in such a way.

How can this be dealt with head-on? It’s a complex issue but ultimately both men and women need to be re-educated to be able to have fun without unmet expectations or unwanted attention. The action of a woman taking her top off in the throes of musical ecstasy should not immediately give the green light to anyone who wants to cop a feel or chat her up, or cast judgment on her.

One of the factors in this lack of liberated spaces could be the recent explosion in popularity of electronic music. Whether it’s commercial or underground, it is certainly no longer considered “fringe.” When your own mother can name more than one techno DJ you know this music is no longer operating on the edges of society. When anything becomes popular it often becomes harder to maintain the original ethos.

Another key contributor, in my opinion, is the style of the British mainstream education system. Our education is often based on academia rather than life skills. Many young people growing up aren’t taught how to respect others’ boundaries or even how to respect and assert themselves.

The Netherlands has an amazing approach to this kind of thing; they teach students from as young as four about feelings. Ineke van der Vlugt, an expert on youth sexual development for the Dutch Sexuality Research Institute says: “People often think we are starting right away to talk about sexual intercourse. Sexuality is so much more than that. It’s also about self-image, developing your own identity, gender roles, and it’s about learning to express yourself, your wishes and your boundaries.”

Their sex education teaches students about love, about feeling good, how to take care of each other, make others feel good, and respect boundaries. Ours is mainly about biology and anatomy. A simple Google search will provide pages of studies that detail the positive impact this has had on people. Norway and Sweden have had similar results too.

There are many clubs in the UK which are helping to create safe spaces, the good work that’s being done by the Good Night Out campaign is supported by super clubs like fabric which are very vocal about making sure their customers always feel safe. There are posters up encouraging people to speak up: “If it’s unwanted, it’s harassment. Speak up if you see something, say something.”Just Jack also recently posted on Facebook the reasons they are behind the “Bristol Zero Tolerance pledge,” showing their commitment towards stamping sexual harassment out of clubbing. This is all a step in the right direction but I wish there wasn’t a need to create initiatives like that in the first place.

“An entire generation has grown up with social media and smartphones, knowing their actions can be captured and uploaded instantly, which could inhibit a person’s ability to truly embrace freedom of expression.”

Another contributing factor to people potentially feeling less free to let loose is camera phones and social media. The same camera phones that are used for selfies can also be pinpointed as a major cause of the increased infringement on dancefloor liberation. An entire generation has grown up with social media and smartphones, knowing their actions can be captured and uploaded instantly, which could inhibit a person’s ability to truly embrace freedom of expression.

You may not be doing anything particularly outrageous but just the knowledge that you could be snapped by a random camera and end up online without your permission can plant seeds of self-doubt in your subconscious. Clubs that have a phone / camera ban give ravers a chance for the soul to be nourished away from the invisible shackles that we’ve all had placed around our ankles.

There are many other points I could discuss… but ultimately, imagine a world where everyone can have the most positive, happy, and elated rave experience possible. I would love as many people as possible to experience this. Completely losing yourself in the music and the night. Not caring what anyone else thinks, or about what you look like in pictures and not having to deal with unwanted attention. I want to see more sweaty ravers hugging each other, without the expectation that a positive dancefloor interaction or dance off with a stranger will have any other consequences than a new friendship.

What happens on the dancefloor permeates out into society and vice versa. If people have nowhere to go to alleviate their woes and let go of their stress then society as a whole suffers. Clubs offer space for people to grow, to nurture their souls and to be truly alive just for a few hours. Often, the result is that they carry that positivity back into their everyday lives and that is exactly what the world needs right now.

It’s about love and respect. x