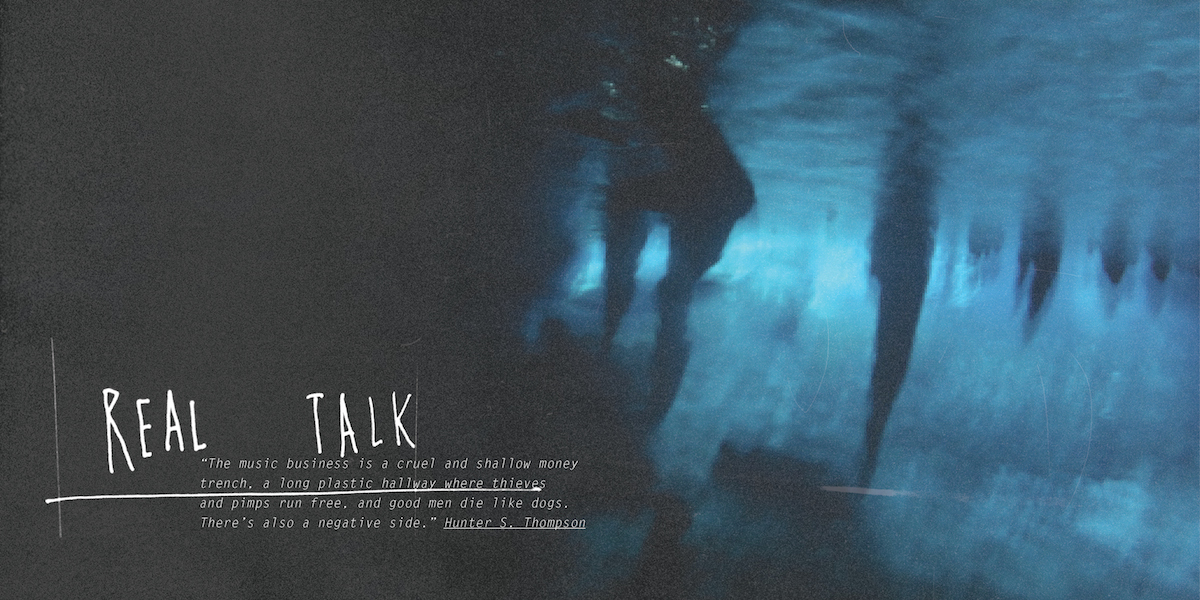 Real Talk is a series of artist-penned essays that appear on XLR8R from time to time.

With the recent closure of one of the world’s most important clubs, fabric, the spotlight has been thrown onto London’s clubbing scene. Big questions fly around about the future of the city’s nightlife, while its proponents have been forced to take up arms in its defense. Much ink has been spilled over the matter, though definitive answers and solutions to its apparent problems remain evasive, and tensions remain high. Has it reached the point of disrepair?

Dolan Bergin and Ajay Jayaram have been there through it all, ever-present at the center of the scene. Together they run The Hydra, one of the city’s most popular event series; prior to that, Bergin was also responsible for electric minds, while Jayaram spent years cutting his teeth at infamous nightspot The End, as well as running Clock Strikes 13. Between the two of them, they have brought an endless array of talent to the capital, all the while paying heed to the shifting sands of the local environment. It was with their knowledge in mind that XLR8R decided to call them up, to set the record straight on London clubbing today.

“The music business is a cruel and shallow money trench, a long plastic hallway where thieves and pimps run free, and good men die like dogs. There’s also a negative side.” Hunter S. Thompson

When we were recently asked to contribute to a feature on the current state of London’s nightlife, we didn’t want to provide yet another negative statement, or an authorities-bashing quote. We felt we had something positive to say.

London is a tough place to operate at times, prices are high and licensing laws are complex, but while the traditional club model and culture seems to be taking a beating, there are individuals out there who are adapting and fighting to push things forward. It’s this passionate and entrepreneurial spirit that overcomes the industry’s obstacles and makes us feel that there is still much to be celebrated.

We are fortunate to have a thriving music scene in London that’s not just about electronic music. It is such an eclectic city that, musically, you can find pretty much anything you’re into every weekend. Festivals in the capital are more numerous than ever, there is a live music circuit, which is over-run with A&Rs looking for the next Adele, warehouse parties are happening again, and if it’s a small basement party for 100 friends you’re after, they are in abundance. In the past fortnight if electronic music is your thing you could find Four Tet bringing rave culture to ten thousand people across two nights at Brixton Academy, Theo Parrish playing an all-night set into the early hours, LTJ Bukem at The Electric, Moritz von Oswald in Hackney Wick, Bicep at Bloc, Tim Sweeney at Phonox and over to Corsica Studios for Jaded’s weekly Sunday morning party. There is choice and lots of it!

We ought to remind ourselves that even on the most miserly weekend of the year, London is host to over 100 parties, featuring the great, the good and the never-to-be-heard of, on a musical flex that somehow straddles a Grand Canyon-sized gulf of diversity and purpose. It’s difficult to truly and definitively know, but surely there cannot be a more prolific musical scene anywhere on the planet?

It’s only right that there should be outrage when we’re faced with the loss of such an institution as fabric, but it becomes somewhat frustrating when the criticism of all of the underlining problems falls short at collective ire towards the authorities. It’s very hard to know what goes on behind the scenes in the corridors of power, but in the same way our NHS comes under pressure, we also feel other public services are affected by the same budget restraints. The conservatives want us to work through austerity and for some of us the only visible result of this policy is that the rich get richer, London’s property prices rocket and the majority find their salaries are worth less and less each year. We imagine it’s just as hard living in London on a police salary as it is for a nurse or any other public service professional.

The police, environmental health and council licensing teams have been supportive of us in recent years (it’s not been without its challenges though) so we do still believe that there are people out there prepared to support London’s music scene. Local authorities are an easy target at times but it’s government who make policies that affect us all, so we need to learn how to influence change at this level.

“While fabric remains shut many promoters and venue owners have rallied around which shows there is a compassionate and professional industry at play. There are some, however, who are ignoring etiquette and racing to pick up the pieces for their own benefit.”

If a police force has its budgets cut they have to look at ways to reduce their workload, so putting pressure on licensed venues to cover all security and emergency service costs means they can apportion funds elsewhere. We think it’s these noticeable changes which are affecting our venues and that cause such distress, but what about the other issues in London we face?

The music industry is formed around artistic contribution, but it’s the business element which often seems to be deemed a dirty word. How much of the recent press attention to the apparent demise of our scene was centered on venue hire fees and general expense of booking some of the world’s most in-demand producers and DJs? If you asked any agent or manager who works regularly with London promoters and festivals, they might have a different opinion on how this city is performing, as they will be inundated with requests from experienced (and not so experienced) promoters.

While fabric remains shut many promoters and venue owners have rallied around which shows there is a compassionate and professional industry at play. There are some, however, who are ignoring etiquette and racing to pick up the pieces for their own benefit. This is the side of the music industry which makes operating with values very hard at times and its rarely talked about in public.

New promoters needing to establish their name are offering grossly inflated fees to lure artists their way. This attitude to things is not about creating a special event, it’s checkbook production and misses the whole ethos of creating those unique moments. This highest-offer-wins approach doesn’t always work, but it most definitely has an impact, which has seen the costs of producing events in London at an all-time high. These costs are as much to blame for recent venue pressures as the authorities approach to licensing.

We have worked hard over the years to approach things with care and attention to detail. We’ve developed good relationships with the artists and agents we work with, so we’re lucky to know that with cooperation, we can usually find a way to book our program each year. Competition in London is insanely fierce and the level of fees being commanded in this city is sometimes pushed to eye-watering levels. This is not a sign of things slowing down or a scene in demise. Luckily it is not all about money, though. When you apply a level of quality, people that care about the fine details often end up finding each other. Labels and artists with integrity recognize these qualities and they are almost always the ones with longevity.

“The music industry can be cruel, but where some see obstacles, others see opportunities.”

What is clear is that consuming music in all its forms, whether it’s a physical, digital format or a concert or club night, everything we know from the last thirty years is changing. London’s club culture doesn’t look the same as it did ten or 20 years ago, but is this the end? When you look at how people consume music today, with holidays dedicated to week-long festivals abroad or online streaming, there is plenty to say it’s as healthy as it’s ever been. Virtual reality has the potential to bring club culture to every global city. It might not be the intense club experience with friends and strangers that we all know and love, but it is progress and even if we don’t like the concept, it’s wise to embrace change.

Some large-scale festivals saw attendance levels fall off a cliff this year, but it’s almost impossible to keep up with the amount of boutique festivals, which happen not just in the UK, but also globally. There are now festivals taking place which cater to an audience who were raving in the ’90s, who have grown up and taken on responsibilities, but who still like to occasionally party when there is downtime to recover. This is a great example of how this industry naturally adapts to keep up with its audiences tastes and needs.

What is more attractive—a UK festival with sky-high prices and the chance of rain over your tent, or an all-in package covering flights, accommodation (with a roof and bed) on the Adriatic coast, for seven days and at exactly the same cost? When we first experienced this option eight years ago, our summers were never the same again. For some, these Croatian festivals were the first taste of music in the outdoors and since then the ideas have been brought back to the UK. We’re sure this has helped contribute to the boutique festival scene, which is flourishing right now.

London’s club culture has been at the forefront of the global music scene for decades and it’s continually mutating into new forms. Its producers and musicians are still making critically acclaimed music, which has a worldwide audience and has provided endless trends and genres. Electronic music is moving up the cultural ranks. There is hope it will be fully recognized soon by the establishment. If not, you would not have the likes of Kraftwerk taking over the Tate’s colossal hall.

London has and always will be full of entrepreneurial spirit and where challenges exist, there will be someone who finds a way to make a party happen. Electronic music is a progressive culture and progressive cultures have nearly always and will nearly always meet resistance from systemic authorities. Like Thompson said, the music industry can be cruel, but where some see obstacles, others see opportunities.