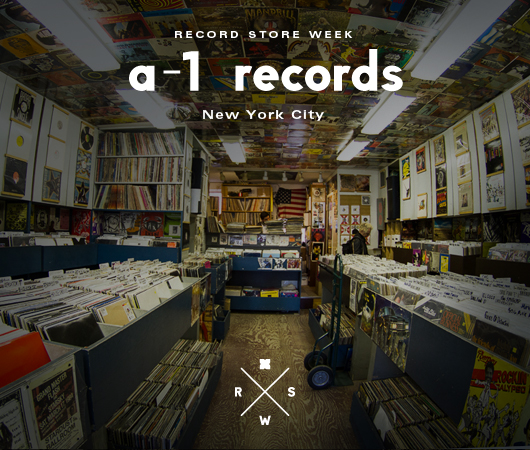 In 1996, New York City’s East Village (which was then simply called the Lower East Side) was a much different place than it is today. What’s now one of the most desirable neighborhoods in the Big Apple, an area stuffed with high-rise condos, exorbitantly priced cocktail lounges, and an inordinate number of sports bars, was then a neighborhood on the edge. Marijuana was being sold out of bodegas, heroin addicts occupied the benches and bathrooms of Tompkins Square Park, and cab drivers would sometimes refuse to even take people there. This was the East Village where bookstore owner and flea-market vendor Isaac Kosman opened a new kind of record store, which he named A-1.

Some 17 years later, hundreds of record stores have both opened and closed in America, but A-1 is still standing—and thriving. “It’s Darwinism,” says store elder Jay Delon, who humbly refers to himself as the “senior guy,” despite clearly leading the staff. “We try to adapt, and not be purists, and stay curious about what people are into.” A-1 keeps things simple, which is surely part of the reason it’s become one of the best-curated record stores in the US. Originally envisioned as both a store for collectors and an alternative to the overpriced classical- and rock-oriented stores in New York’s West Village, A-1 quickly became one of the top destinations in the United States, or perhaps even the world, for jazz, soul, and rare grooves. Producers like Gangstarr’s DJ Premier, Pete Rock, The Alchemist, and Masters at Work were early regulars, buying stacks of obscure records for sampling and use in their own productions, which DJs were in turn buying and playing as soon they were released. Over time, A-1 continued to evolve, expanding its racks to include hip-hop, rock, disco, boogie, house, and techno. With each addition, A-1’s importance to NY’s music scene only grew, a notion that legendary rare-groove DJ Amir (a.k.a. Amir Abdullah, of Kon & Amir, and owner of the reissue label 180 Proof), lays out in more detail. “Hip-Hop owes a lot to A-1 Records,” he says. “Everyone from Lord Finesse to Midi Mafia shopped there and made some of their classic tunes from records they bought there.”

Walking into A-1, one is immediately struck by the records, obviously. Simply put, it’s a record store, and not some fancy boutique with minimal design and only a handful of selections. The place is literally stuffed with records, floor to ceiling, with every bin rammed full, every nook and cranny filled, and every horizontal surface stacked high. Still, A-1 has its distinctive decorative touches, like the amazing collection of polaroids that dates back to the ’90s and includes photos of famous and obscure producers alike; there are shots of everyone from Havoc of Mobb Deep, Lord Finesse of D.I.T.C., and legendary New York DJ Tony Touch to unknown but celebrated producers like Sebb. It all ties into the real sense of community and equality that permeates A-1. Shopping at the store, one might find themselves sitting next to, or even exchanging notes with a famous ghost producer for Diddy, a grandfather hunting down jazz classics, or a young person who’s diving into dance music and discovering the depths of Strictly Rhythm catalog. For instance, Amir recalls first meeting Pete Rock at A-1:

I saw Pete Rock listening to records and really wanted to give him a copy of my first On Track tape. I was mad nervous, cuz I am huge Pete Rock fan, and I contemplated it for about 10 minutes. Finally, I decided to just leave, but at the last second, I decided to give him a copy. I just told him that the mixtape was a break and sample mix that was dedicated to our favorite producers, such as Pete. Three weeks go by and I totally forgot that I had given him the cassette and that I had met him. One day, I get a page (Yeah, I still had a pager in ’98) from someone named Pete. I didn’t recognize the voice. I called the number back and I said, “Someone named Pete called me?” Pete was like, “Yo, what up? It’s Pete Rock! I love this fucking mix. Yo, we should go record shopping together!” That made my day more than anyone could imagine—all because of A-1 Records!

More recently, house in particular has been a growing section in the store, due in part to the expert buying skills of L.I.E.S. label boss Ron Morelli, who’s worked at A-1 for the past three years. However, Delon also cites the regular ebb and flow of the New York music scene. “We are basically focused on New York music because we get our music from local DJs and collectors,” he explains. “House music shops have been closing, and our disco section has been shrinking because we aren’t finding as many collections as we used to because the people have already retired, or died. The demand had decreased as well; the guys who were seriously collecting boogie a few years back are now on to acid house.” These trends go beyond A-1 though, as Delon quickly notes, “There is definitely a house resurrection in New York City.”

It’s hard to deny that the New York house scene is having a real renaissance, particularly when L.I.E.S. has become one of the most celebrated and hotly tipped labels in dance music. At the same time, several of NYC’s best house-focused parties, including Discovery, Let’s Play House, and Mr. Saturday Night, have not only grown in both in size and reputation, but have gone on to launch successful labels. The intersection between these labels and their artists is obviously the club, but A-1 undoubtedly plays a role. Mr. Saturday Night co-founder Justin Carter zeroes in on exactly what makes A-1 such an incredible destination:

A-1 is special because they’re experts in all the genres they stock. I’ve found rare modal jazz, obscure Chicago house, collectable Prince records, European techno, and classic ’90s hip-hop over the years there. There are plenty of stores that specialize in one or two genres, and those are great, but it’s rare to go into a shop and find well-curated selections in so many different directions.

It’s no secret nor surprise that both file sharing and digital DJing have been a major factor in the demise of physical record stores. Even those looking to purchase records legitimately have been affected by the internet and these technological changes, as Ebay, Gemm, DustyGroove, WhoSampled, and Discogs have all changed the way obscure records are bought, sold, and more importantly, how they are priced. According to Delon, Discogs specifically has changed the marketplace. “People can have their own record store online, with no overhead,” he explains. “They can compete with anyone.” More than anything, the abundance of information has changed how people shop, as Delon points out, “People have more information. They can Google. People aren’t fools. Everyone is informed.” In a way, the internet has become a great equalizer, as sites like Discogs have shown people what is actually rare, as opposed to what is merely perceived to be rare. “The rarer it gets, the more expensive it is,” says Delon. It seems simple enough, but the flipside is that “sometimes a rare record is rare for a reason. Maybe it didn’t sound good, or didn’t appeal to DJs, or maybe they didn’t have payola. For some people, it becomes a pissing contest.” He continues, “It’s a fine line between rare and medicore.”

Traditional diggers may complain about the new world order, but Delon asserts that there is an upside to this better understanding of supply and demand. “Because demand has decreased, some amazing records can be found for $5,” he says. “Give me $100. I will find you 50 records for $2 each that you can rock a party with.” That’s a bold statement in an era when new 12″s regularly sell for between $12 and $24. Furthermore, Delon knows that no matter how much the internet has changed the record-selling game, it can’t completely eliminate classic digging skills. “Real music lovers don’t dig with smartphones,” he says. “If they listen to an unfamiliar record and they like it, they just cop it. It’s about trusting your instinct.” A-1 has to stay on top of its game as well. “After pricing millions of records,” says Delon, “I know what people are willing to spend on a record. Of course, I use the internet to base my pricing, but if a record is worth $30 online but sounds like shit, then it will end up in the new arrivals for $5. There’s no longevity in being a shyster or a used-car salesman in this game.”

Today, A-1 remains in the heart of the East Village, its once-empty block now rammed with not one, but three artisanal cocktail bars. The neighborhood continues to morph and change, and though A-1 has changed too, the store still retains the quintessential charm of the New York City shopping experience. The employees have a vast amount of knowledge, the kind that can only be acquired by poring over thousands of records every single day. Still, they aren’t shoving their wisdom down anyone’s throat. Even after nearly two decades in business, the store is just as likely to welcome a visiting European DJ to raid the stacks as it is to tip off a new producer to some amazing yet unused sample material. At the same time, the staff is also just as likely to eject a pain in the ass who’s trying to bring a bike inside instead of locking it up out on the street—it is New York City, after all.