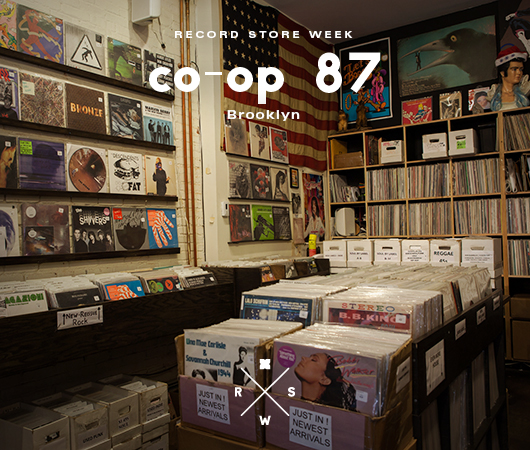 On Co-Op 87‘s stereo, co-owner Mike Catalano is enjoying an LP by Latin composer and lounge cult-figure Juan García Esquivel. Catalano’s business partner, Ben Steidel, voices his approval of the seemingly bargain-bin fare and says, “Yeah, people are really quick to dismiss records like this.” Catalano agrees. “Yeah, there’s pretty remarkable stuff out there that’s not cared about anymore, for sure.” This shared infatuation with the obscure and underappreciated sides of music history is something that drives Co-Op 87; though the shop features the usual sort of rock, soul, jazz, hip-hop, house, disco, and country offerings, sections of the store have also been dedicated to private press LPs, Bollywood, calypso, Irish folk, and even cheesecake album covers.

Greenpoint—the Brooklyn neighborhood where Co-Op is located, just north of Williamsburg—has become a record store haven in recent years. For starters, there’s Record Grouch and the ultra-cluttered vinyl basement of The Thing within a block of each other on Manhattan Avenue. Veteran shop Permanent Records sits one block west on Franklin Street. There’s also the recently relocated Academy Records Annex, the Captured Tracks Shop, and Co-Op 87, which is located on a quiet stretch of Guernsey Street near McCarren Park. This surplus of stores doesn’t faze Steidel or Catalano, who are celebrating their shop’s three-year anniversary this month. “I totally welcome it; I think it makes it a destination for people who want to go record shopping,” says Steidel. “The bulk of the people who go out and buy records want to go to every record store, or at least go to a couple. I don’t really see it as competition.”

Co-Op 87 wasn’t always a partnership between Steidel and Catalano. In the same way that record stores flocked to Greenpoint after Williamsburg became prohibitively expensive, many record labels also call the neighborhood home. And at 87 Guernsey Street—in the same building as Co-Op 87—are the offices for local indie labels Mexican Summer (which owns the building) and its Software imprint, as well as Kemado, RVNG, Beats in Space, and Sacred Bones, all under one roof. In addition, a recording studio called Gary’s Electric was constructed in the rear section of the building, allowing the labels’ artists to record in-house with engineer Al Carlson. (Most notably, Daniel Lopatin harnessed the studio for his Oneohtrix Point Never LP Replica.) Originally, the name Co-Op 87 was chosen to reflect that communal ideal on the retail side. “Honestly, the name Co-Op 87 was not our idea,” Steidel elaborates. “It was the name because there was this idea going into it that there was going to be this group of Brooklyn record labels all working together cooperatively and sharing. That’s why the store had that name, because it was supposed to be this co-op of record labels, and the shop was going to be the boutique front for that.”

In 2009, Co-Op 87 opened in its initial form—as a boutique that carried releases from all of the resident labels. Before opening its own shop last year, Captured Tracks—an indie label run by Steidel’s and Catalano’s former partner, Mike Sniper—also had an office in the building and was part of the cooperative. “And so [the labels] had a boutique store there that was all new records, and they did that for a while and at some point they decided to stop,” Steidel continues. “And at that point it was like, ‘Hey, there’s this record storefront already built out.'”

Co-Op 87’s owners both have a long history with record stores. Growing up in the Bay Area, Steidel worked at Amoeba Music in San Francisco for nearly 10 years—most of his adult life. Tired of the insular music scene and ready for a change, he decided to move to Brooklyn in 2007 with his band Lemonade. At the time, Lemonade was signed to True Panther Sounds, whose founder Dean Bein hosted Steidel on his couch when he first arrived in the city. Through Bein, he was eventually introduced to Sniper—who was then a manager at Academy Records in Williamsburg—and soon found himself with another record store job. Raised in New Jersey and New York State, Catalano had been a manager at Academy since its inception, helping to open the Williamsburg store in 2004. Sniper, Steidel, and Catalano became acquainted at Academy, and were heavily involved in digging for collections and pricing the store’s used LPs.

Since Sniper’s label had an office at 87 Guernsey Street and he knew many of the staff at Mexican Summer, it wasn’t difficult for him to imagine what the shuttered Co-Op 87 boutique could become. The three Academy managers had all thrown around ideas of opening their own record store before, so when the opportunity presented itself, they decided to go into business together. Initially, it wasn’t hard for them to find records. “I put stuff on Craigslist in weird counties out of New York, you know, stuff like that,” Steidel says. “And then, both Sniper and Catalano grew up on the East Coast, know a million people, have been involved in music here forever, so just kind of putting the word out there. It came very quickly.”

In July of 2011, Co-Op 87 opened its doors for the second time. There were no strict ground rules for the shop, but the owners knew this: they would mostly carry used records, they would sell them at a reasonable price, and they would make the space inviting to a wide variety of people. Today, it’s nearly impossible for a record store to survive by only selling new releases; still, Co-Op 87 does stock a small amount of new dance and indie LPs, but mostly from artists that the owners have a relationship with. Steidel enjoys working directly with labels, especially when they’re based in the neighborhood and can walk their titles into the shop. Before Ron Morelli moved to Europe, he lived in the area and would personally bring in new L.I.E.S. records as they were released. Local label owners William Burnett (a.k.a. Willie Burns) of WT Records, the founders of label/party Let’s Play House, and Gadi Mizrahi of Wolf + Lamb regularly do the same. “It’s a thing where a lot of DJs that are shopping in the store are interested in both picking up the new 12″ on whatever label, and also digging through all the used stuff,” says Steidel. “I think it’s a good sort of balance between the two.”

Additionally, DIY touring bands or producers who ask Co-Op 87 to carry one of their records will find the store to be surprisingly receptive. “When people take the time to bring their records into the shop, I like supporting that too,” says Steidel. “We’ll just buy stuff outright. Our sort of philosophy on that—because you know, a lot of times, not just in dance music, but the punk band on tour comes in and goes, ‘Do you wanna carry our 7″?’—and assuming the wholesale cost is not ridiculous, we’ll almost always say yes.” Steidel knows that not all of these records will sell, but that isn’t the point. Co-Op 87’s business theory is simple: if you support local music communities, everyone benefits, because the store will build a lasting reputation in turn. This open-minded attitude seems to be paying off for the owners, as the store has not only become a destination for artists of the building’s many labels, but the only place in New York where certain small-press releases can be found.

Co-Op 87 has a similar philosophy with its pricing, in that its owners choose to price LPs fairly, when they know they could probably get away with charging more. Steidel and Catalano check the current market value of each record they sell, finding a compromise between online resources like Popsike and Discogs, as well as knowledge of what the LPs have sold for at Co-Op 87 in the past. They also make a point of constantly updating their inventory, so that frequent visitors will always find something new. With this approach, they hope to earn the respect of hardcore record collectors, as well as shoppers who are new to vinyl. “I want people to feel comfortable, and not feel intimidated by the shop,” says Steidel. “You want the respect of the people who are deeply invested in collecting, but you also want to come off as friendly and helpful to the more casual shopper. That’s important.”

Early last year, Sniper amicably parted ways with Co-Op 87 and took up residence in a new office space at 195 Calyer Street, where he also launched the Captured Tracks Shop. When he was involved with Co-Op 87, Sniper’s major focus was his label, though he was instrumental in founding the store, building the initial inventory, and occasionally coming in to handle new collections. Steidel and Catalano, however, have always been the shop’s full-time managers, and remain so today; with only one other full-time employee at present, Co-Op runs an extremely tight ship. Each of the owners’ music tastes is distinct and complementary. For example, Steidel skews further into dance-oriented styles, contemporary indie, and hip-hop, and Catalano loves classic surf rock, doo-wop, and punk. They share a passion for ’60s and ’70s Latin sounds, as well as vintage library music. The parallels between them run a bit deeper, though. “In many ways, we are similar in that we’re both really into the obscure and esoteric, and weird stuff,” Steidel explains. “I mean, the most exciting stuff is when I find a record that I can’t find anything about on Google, and it’s truly, actually obscure. And if it’s good, that’s really exciting.”

The key word is “good,” as Co-Op 87’s owners have little interest in LPs that are rare just by virtue of being highly limited. In fact, Steidel and Catalano are confident that if they never sold a record for over $50 again, it would barely affect their business. That’s by design—people tend to shop for records under $20, because they want take home a few, instead of just one collectible LP for $200. As for Co-Op 87’s future, Steidel and Catalano will be keeping their modest space at 87 Guernsey Street, though expanding isn’t out of the question. Right now, however, they have their hands full. Steidel’s band Lemonade has a new album on the way, Catalano now plays rhythm guitar in Screeching Weasel, and the two still hold full-time shifts at Co-Op 87. As a record store and as people though, it’s clear that the two men have found honest success and earned respect in the local community. “I’ve been in touring, ‘professional’ bands for a pretty long time; I’ve never supported myself solely on it,” Steidel says. “I’m pretty happy with my life, and my expectations have diminished. Careerism isn’t necessary.”