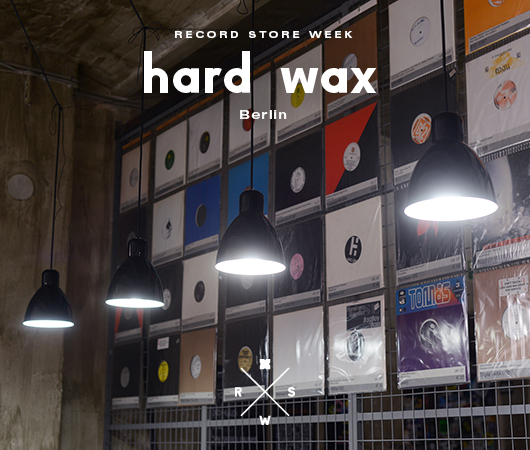 Back in 1996, when Biba Kopf traveled to Berlin to profile Basic Channel for The Wire, Mark and Moritz—who back then refused to give their last names—took their interviewer to a record store.

“[They] invite me the Hard Wax record shop in Kreuzberg. For three hours, I am blitzed with a brief history of Chicago house and Detroit techno: the early Chicago acid tracks of Phuture, Armando and Armani, then moving onto Detroit for Cybotron, Model 500, Underground Resistance, Jeff Mills, Robert Hood, and Juan Atkins.”

Nearly two decades on, making a cursory reference to Hard Wax without pausing to reflect on its importance would be unthinkable. Over the years, the reputation of the store has become widespread, while the age-old reference points of Detroit and Berlin remain as strong as ever. This ‘axis’ may dominate Hard Wax’s historical narrative, yet many more of the shop’s founding virtues continue to live on in the shop’s current operations. At the same time, Hard Wax has been hyper-perceptive to a changing music market, growing in size and influence during an era when physical music sales have faced seismic challenges.

It was Mark Ernestus who first opened Hard Wax for business in 1989 at its original location on Reichenbergerstrasse. In the years that followed, a network of musical projects and initiatives would grow around it. Ernestus teamed up with Moritz von Oswald to produce the seminal dub-techno of Basic Channel in the early ’90s. A label of the same name would release their own music, while the Chain Reaction imprint would promote the work of other, like-minded artists. Hard Wax was instrumental in pushing this “Berlin sound,” but also made sure to tip its hat to the dub and reggae influences that Ernestus and von Oswald leaned on. The pair also founded Dubplates & Mastering around this time, a speciality mastering house that would preserve the dynamic sonic quality the two men demanded of their final cuts. These pieces of the puzzle are all important when telling the story of Hard Wax, and each one is still represented in the current life of the store.

Today, Hard Wax is tucked down a cobble driveway at Paul-Linke-Ufer 44A, not far from its original location (from where it moved in the mid ’90s). If not for some faded signs, it’s hard to know where the shop is, but like other Berlin electronic music institutions, the journey makes the arrival all the more thrilling. The walls of the store are stocked with records and sounds that Hard Wax holds dear: much of the Basic Channel archive, Detroit rarities, new releases (including the most current Ostgut Ton records), and a wall dedicated to reggae and dub 45s. And on the floor of the store are names, labels, and genres that most house and techno enthusiasts would be familiar with: Ostgut Ton, Skull Disco, FXHE. There’s not much to “discover” at Hard Wax, which is a notable point of difference from other well-known Berlin haunts, like Spacehall or Record Loft. Whatever “digging” a Hard Wax customer wants to do can easily be done via the shop’s website, where every release is listed with accompanying preview clips. The idea is to make the same records available to everyone, regardless of where they’re living.

“Since the very beginning, Hard Wax always had the mail order department because Mark was very aware that it was always really hard for people that were not in Berlin, or London, or Hamburg to get music,” explains store manager Michael Hain. “He always had a focus especially on these music fans.”

Hain has been working behind the counter since 2001. It’s obvious from the way he’s versed in Hard Wax’s history that he’s committed to continuing the vision of Mark Ernestus. He has keen music business acumen to boot. But beyond his knowledge and involvement with the store during its transition to the internet transition and subsequent growth, Hain offers the best insight simply because he’s willing to sit down for an interview. Longtime employee DJ Pete (a.k.a. Peter Kuschnereit) has occasionally spoken about his time at the store, but other Hard Wax veterans, such as Torsten Proefrock (a.k.a. T++) and Sascha (as well as head honcho Ernestus) have remained notoriously tight-lipped in the few interviews they’ve given.

The staff at Hard Wax and their way with words (or lack thereof) is something that’s well practiced and renowned, not only when it comes to interviews and press. The methods Hard Wax used to spread music through the ’90s came in the form of printed catalogs that were sent to subscribers. Naturally, these were restricted by printing costs and space. “The Hard Wax descriptions—the really short, abbreviated language—are coming from that time because the guys had to be as precise as possible,” explains Hain.

As with every industry, establishing an online presence was a game changer for Hard Wax, although Hain is hesitant to put a precise date on it. “We had a website quite early in the ‘Age of the Internet.’ When I started working at Hard Wax, that website was up already, but not the webshop.”

The online shop obviously allowed Hard Wax access to a broader international market, yet the store’s mission remained the same: “To have great music and make great music available to people,” says Hain. “What you see on the website is what you get in the shop. The webshop and the physical shop are both the same thing,” he explains. “I always try and give people who order, call, or email the same treatment and experience as a customer in the shop.”

“We have a lot of mail-order customers in small cities in Australia and Taiwan to Malta and Singapore,” he adds. “That’s the advantage of the internet thing, that you can access the scene without living locally. You don’t need to have a Berghain in your town to see the right people, or the right places to get the music.”

As the reach of Hard Wax’s mail order expanded, so did the shop’s influence and cultural relevance. In 2012, the store’s “short, abbreviated language” was satirized in the title of Joy Orbison’s “Big Room Tech House DJ Tool – TIP!” (The track eventually saw an official release on the Nonplus-issued Think and Change compilation in 2013.) Incredibly, the song actually led to the oft-quoted “TIP!” recommendation being removed from Hard Wax vernacular. “I found that really funny,” admits Hain, although he understands why the Hard Wax braintrust decided to stop using the word, despite it being the store’s unique stamp of approval. “It became a thing. It was never supposed be that.”

Amusing as the “TIP!” affair may have been, the incident demonstrated just how intimate the connection between Hard Wax and the larger electronic music scene has become. Hain readily admits that the success of the shop would be unthinkable without the creativity of the artists, labels, and promoters that make up the sum of the subculture. Even as the music market has continued to rapidly change in recent years, Hard Wax has remained mobile, influential, and reactive.

“If you’re 20 years old now, you don’t even know what a record player is,” says Hain matter of factly. “Our job description has changed.” The Hard Wax download store that opened two years ago is part of the “change” he’s referring to. “It means we’re future safe,” he explains. “We can provide the music we want 10 years from now. Vinyl and downloads makes perfect sense, somehow.”

Hain is not indicating that Hard Wax foresees the decline of vinyl. “That would be entirely false,” he adds assertively. For Hard Wax, the digital download store was a “service expansion,” because there was an increasing amount of music the shop wanted to stock that was only being released digitally.

“There is no A&R position, like in the traditional recording industry,” says Hain. “Therefore distributors and the shops have to do this job. And there’s too many releases out there. We can’t handle it and neither can the customer. The budget of the customers is always the same, but there are too many releases that compete for this budget.”

Of course, competing is made much easier by Hard Wax’s close association with labels such as Ostgut Ton and Shed’s Power House imprint. “We get our Ostgut releases directly and it’s amongst the best-selling labels in the shop,” says Hain. “We are connected to Ostgut personally through our former and current colleagues releasing on the label or being residents at Berghain or Panorama Bar. It’s hard to say when [the association] started.”

Still, Hard Wax hasn’t been content to simply ride on its credentials or its association with similarly legendary labels. The store continues to search for sounds outside of the most commercially viable fare. For instance, White Material might be a hotly tipped label now, but back when it was just a fledgling outfit, Hard Wax snapped up every available copy of the young imprint’s debut release—and sold them all. The store’s support was unquestionably instrumental to the label’s success, and that kind of push isn’t limited to just the latest slices and house and techno. In fact, the newest and fastest growing section at Hard Wax is ‘Outernational.’ “It contains a lot of reissues and new labels and stuff from Mark [Ernestus], and the musicians he’s working with from Senegal,” says Hain.

Since the store’s earliest days, Ernestus and his buyers have worked hard on developing and strengthening a connection to sound system dub, reggae riddims, and other ‘outernational’ sounds. In an interview with Electronic Beats last year, Ernestus gave his honest take: “I always thought if you love techno and you don’t at least appreciate dub or other music that is based on reduction and repetition, there’s something wrong. There’s not supposed to be a divide there.”

Of course, nothing exemplifies this belief better than Ernestus’ work with Mortiz von Oswald as Rythym & Sound. The pair’s sparse dub productions, layered with vocalists like Tikiman and Jennifer Lara, offered the most explicit expression of the Basic Channel-dub axis, with the results being issued on a series of 10″s via Burial Mix, a Basic Channel sub-label. Paralleling the Burial Mix series was Hard Wax’s comprehensive reissue schedule of Wackie’s, a prolific, New York City-based dub label founded in the late ’70s. Thanks to this effort, artists like Horace Andy, Sugar Minott, and countless lesser-known figures continue to appear across 12″s and compilations. Furthermore, amongst Hard Wax’s clientele, it has helped to feed a healthy curiosity beyond the world of house and techno. “In the last couple of years, we’ve seen more and more people—house and techno guys—who start to buy reggae 7″s or 12″s once in a while, which is really nice to see.”

This kind of positive outlook can be detected in just about everything that Hain says, and stands in striking contrast to the stereotype of the surly record store clerk who bullies ignorant customers. “The ‘arrogant’ thing is something that a lot of record stores have to deal with,” says Hain. “All my efforts as a person in the shop are focused on this not being the case. Even if someone asks for the crappiest record that wouldn’t be in the store, we try and take everyone seriously and give them recommendations that we do stock. People are craving good music and if you take them seriously, they’ll find something good.”