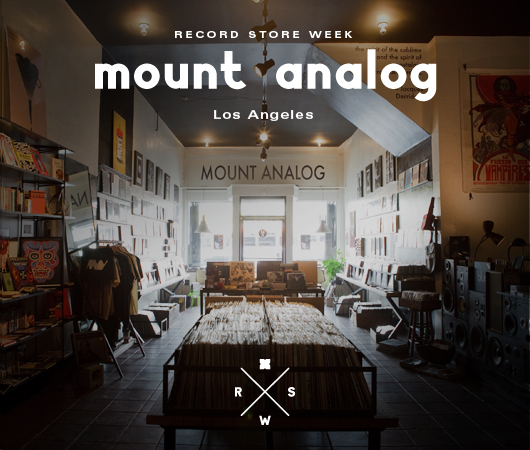 Los Angeles is associated with many things—sunshine, traffic, Hollywood, etc.—but quality record stores rarely make the list. Sure, there’s an LA branch of Amoeba and the city boasts a handful of shops specializing in a variety of sounds, but for those looking to purchase electronic music, particularly of the house, techno, and experimental persuasion, the city has felt like a bit of a dead zone for quite some time. That said, a major ray of hope emerged last year with the opening of Mount Analog, an impeccably curated shop in the city’s Highland Park neighborhood. Though it has only been open for less than a year, the store has quickly made its presence known, and already feels like an integral part of the LA music landscape.

Admittedly, we were first drawn to Mount Analog after hearing whispers about its house and techno selection. One can only be told something along the lines of, “Seriously, this place has so many cool records, you have to go” before they’re eventually going to check a place out. And, truth be told, the rumors were true. There aren’t many shops in the US with section dividers for artists like Shed and Anthony “Shake” Shakir, let alone racks that are actually stuffed with their releases. Even for those who don’t make a habit of buying vinyl, a visit to Mount Analog is almost certain to elicit multiple outbursts of “Whoa, I can’t believe they have this.”

“There are a lot of DJs that shop here,” says Zane Landreth, who co-founded the shop with partner Mahssa Taghinia. “That was a really important thing for both of us. LA club culture is going really strong right now… [but] there was no home for those kids… [a place where] you walk in and you’re like, ‘This is great. I know that they’re going to have my titles, and if they don’t, they can order them for me, and I don’t have to spend all of my money at Boomkat or Juno and $30 on shipping.'” He continues, “We wanted to bring that to LA because it was something we were really interested in and all of our friends—and us—were spending all of our money buying records on the internet. I don’t want to buy records on the internet. I want to flip for my records.”

Apparently, our experience of being surprisingly compelled to purchase records at Mount Analog was not a unique phenomenon, as Taghinia adds, “I feel like we’ve unearthed an entire population of people that were dormant record buyers, that are now excited that there is a place where they can be instantly gratified and not just wait for their monthly Boomkat package to show up. They can get their fix here.” That said, although Mount Analog did recently open its own web store, its owners aren’t truly looking to compete with the internet, which Taghinia refers to as an “infinite beast.” Keeping the shop’s walk-in customers in mind, she and and Landreth are working to limit the lag time between when new releases are announced and when they actually arrive in the store’s racks. It’s more of a process than an event, but the gap is slowly closing, as Taghinia says, “Every single day, I’m getting in touch with new labels, or artists directly, or labels directly, trying to make more direct connections, to get records in quick, to get records in fast. That’s the beauty of what a small record shop can do, is develop relationships with labels directly.” Her efforts are already paying off, as hotly tipped labels such as L.I.E.S. and Hospital have begun regularly sending large stacks of their new releases to Mount Analog, often without the store even having to order them.

Taking a step back, it’s important to note that Mount Analog is much more than just a place for house and techno diehards. The store’s name is inspired by René Daumal’s bizarre early 20th century book, Mount Analogue: A Novel of Symbolically Authentic Non-Euclidean Adventures in Mountain Climbing (with an obvious play on analog/analogue, of course). Yet the connection goes further, as Taghinia sees the store as a place guided by, “a sense of adventure and exploration and not knowing what you’re getting into.” She continues, “I think we capture that spirit pretty well, in terms of coming in here and learning about new things and getting into new music or new books, or checking out cool artwork or whatever.” Knowing that, it makes sense that the shop would adventurously carry such a wide selection of sounds, including darkwave, Italo, electro, acid, goth, minimal wave, EBM, industrial, new beat, disco, psychedelic, Krautrock, hardcore, punk, post-punk, folk, Americana, funk, soul, hip-hop, R&B, dub, reggae, noise, experimental, and more. Not content with solely relying upon standard genre tags, Mount Analog’s owners have also come up with clever groupings of their own, including Now Sound (new releases), Then Sound (classics and vintage gems), and Out Sound (which Taghinia says, “comprises psychedelia, Krautrock, library, new age, Kosmiche… genres that aren’t focused upon or touched upon by other record stores in LA.”).

Not surprisingly, this kind of diversity is reflected in the owners themselves. Landreth spent most of his adult life as a band manager and tour manager, often spending months at a time of the road. Describing himself as a former “punk kid with a goth streak a mile wide,” he eventually wound up in LA and began throwing parties, including a coldwave/minimal-synth night called Killing Spree. It was actually at a Killing Spree party where he met Taghinia, who was working as a bartender. That said, Taghinia had a significant musical history of her own. Growing up in Columbus, Ohio, she later spent several years in New York before eventually landing in Los Angeles. She also promotes parties and runs her own label, Finders Keepers, but unlike Landreth, she actually spent most of her pre-Mount Analog years working in record stores. As she explains, “It’s the only day job I’ve ever had. It’s the first day job I ever had. It’s the only day job I’ve had since.” And though she’s quick to admit that she and Landreth “balance each other out,” she’s clearly the one with the nuts-and-bolts retail know-how. Speaking about her motivation for opening Mount Analog, Taghinia explains, “It just felt right… I had a really clear vision as to what we could stock, what we could carry that would fill—I don’t want to say a void—but could add to and emphasize what makes LA pretty awesome.” Landreth adds, “We were [both] doing things that were really successful, but there wasn’t a home for either of them. It just kind of felt correct that it was time that we made a home for the interests that we had that we knew other people would enjoy… [we wanted to] make a space that everybody could come together and share.”

Although they’re both transplants, both Landreth and Taghinia are bullish about their adopted hometown. Landreth excitedly claims that LA is “the best dance-music town in the country,” and revels in his ability to “make LA the LA I want it to be.” Taghinia adds, “I think that’s the only LA that exists—the LA that you want it to be. I think that’s what makes the city great.” People from New York may look down their nose at LA, but the duo behind Mount Analog isn’t buying it. Taghinia elaborates, “LA is destinational. You have to make an effort to be somewhere… You make a conscious choice to be in a certain place at a certain time. Wherever you go, when you know that people chose to be there, I think that makes things a bit more special. It’s not an accidental happening… seeing events that are well attended, shows that are well attended, record stores and bookshops that are busy, I think it’s awesome because it’s showing that people are wanting to go to these places. It’s one of those things that sets LA apart from NY… there’s an underlying conscious effort that’s going into being a part of the scene, being a part of the fabric of this city.”

This outlook carries over to Mount Analog, as Taghinia observes, “People are choosing to come here. It’s not because they can walk by and it’s convenient.” Given that, she and Landreth are doing their part to make the shop as much of a viable and interesting “destination” as possible. For instance, the store frequently plays host to in-store DJ sets and live performances. Since the shop opened last July, guests have included Demdike Stare, Ron Morelli, Steve Summers, Secret Circuit, Pharaohs, Juan Mendez, and Silent Servant, amongst others. (This curatorial prowess also extends to events outside the shop, the most prominent of which is the store’s Nuit Noire series, which has played host to artists such as Andy Stott, Kangding Ray, and Mutant Beat Dance.)

Apart from all the quality music, the store itself also excels in terms of layout and design, something that was realized with the assistance of Kyle Garner of Brooklyn-based gallery/creative agency Sit and Read. Walking into the shop, it’s hard not to be drawn to its front counter, a smartly assembled, Tetris-esque mish-mash of vintage speakers, which amazingly have been wired together and actually work. Zandreth gushes, “That’s what we use for in-stores. If we have a DJ in the store, it plays out of the speaker wall.” Beyond that, Mount Analog is littered with interesting decorative flourishes, from its two stylish listening stations to the vast array of knowingly weird and kitschy books, movies, art, and other miscellany that covers many of its counters and shelves. There’s an ever-expanding cassette section, including a cassette-tape listening station and an entire wall display devoted to oddball tape label Burger Records. Even gear heads have something to do at Mount Analog, as San Francisco outlet Dijitalfix has been enlisted to populate a sector of the store with headphones, speakers, a assorted music-making devices. It’s clear that a lot of thought has gone into the shop’s appearance and aesthetic, which likely explains how, even with all these minute details, Mount Analog never looks cluttered.

“Every single piece of this store has been analyzed and dissected and argued about for about a million hours on end,” says Taghinia. “I always had this idea about a retail space feeling like a living room… you think about friends that have cool book collections or cool record collections or cool whatever collections. You go to their house, and you see that things are so well placed on their shelves, and you just go look at it. You always gravitate to somebody’s bookshelf. You flip through people’s records. I wanted the shop to be inviting in that same sense, so it could feel like a model living room.” Surveying Mount Analog, it’s hard to argue that her vision hasn’t been brought to life.