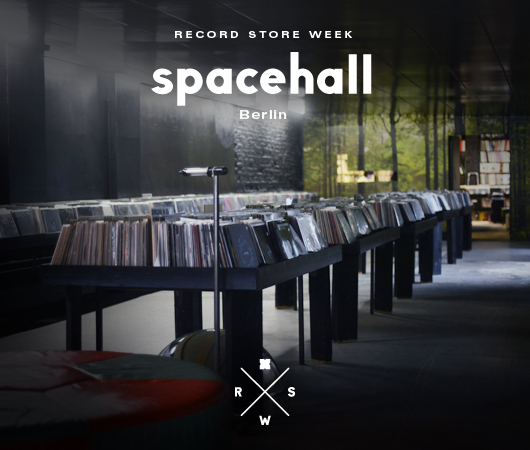 No one can deny that running a traditional record store is a hardscrabble, occasionally heartbreaking commitment in today’s tech-savvy times. Despite feverish industry statistics about a rebounding vinyl market (records sales are now said to back at the same level as in 1997), the rate of announcements about independent records stores shutting their doors in the face of diminishing returns doesn’t seem to be slowing. Berlin is a notable exception, a place with a curious overabundance of vinyl outlets, from specialist plattenladen to used-record sellers at flea markets. There’s no shortage of variety, yet Berlin still has its standout locales, one of which is undoubtedly Spacehall, a shop situated just off a bustling shopping strip in the southern end of the city’s Kreuzberg neighborhood. “I think that Berlin is almost the last city in the world that offers several record shops,” said Markus, one of Spacehall’s now-former staff members, in a video interview last year. “In a lot of cities, it is now difficult to go to a record shop on a normal weekday, buy the vinyl that you want, have it in your hands, and come back home. I think in this way Berlin is affecting the vinyl market, but it is not only the people living in Berlin that like vinyl.”

There are roughly eight club and electronic-music record specialists that locals and visitors alike will regularly list as the essential shopping spots in Berlin, and they fan upwards from Kreuzberg through Friedrichshain, Mitte, and Prenzlauer Berg. Though they all, more or less, prioritize Berlin’s staple house and techno sounds, most also nestle into a specific niche; there’s the music/art/fashion shop (Rotation), the hip-hop and beats shop (HHV), the disco specialists (Oye), the second-hand house specialists (Audio-In), and the limited, hand-stamped white-label specialists (Hardwax).

Of this lot, Spacehall has become known as the best shop in which to find overlooked gems, dig for rare favorites, and fill those stubborn holes in your collection. Spacehall’s cavernous vinyl store devotes at least half of its floor space to back-catalog records, which remain democratically (if not cheaply) priced alongside carefully selected new releases. “Its funny,” says Gabriel, a staff member of 18 months, “because sometimes [labels] will start to repress older records that we actually still have in stock.” (Editor’s note: Gabriel, like all the Spacehall employees we spoke with, is only comfortable publicly revealing his first name, as he states, “Everybody goes just by his first name. We don’t really need to put the [full] name and actually I prefer it.”)

Spacehall has existed in various configurations in and around its current Zossenerstrasse location for over 20 years. The shop’s mohawked owner, Peter, can frequently be seen darting through the entire length of the vinyl shop at Zossenerstrasse 35, past the café at number 34, into the Spacehall CD shop at number 33, and down to the basement office, where he and his wife manage the day-to-day operations. What is now the café was the pair’s first venture in 1991: a DIY basement setup with 800 CDs and a similar number of records. The next decade saw a reshuffle: A second spot, Neu, emerged around the corner on Bergmannstrasse, while Spacehall proper shifted next door to number 33, with CDs on the ground floor and house/techno vinyl in the crowded basement, and a pop/rock vinyl section opened in number 35. Once Neu was jettisoned from its satellite spot in favor of a new (and largely derided) shopping-center development, the Spacehall crew literally punched through the walls at the back of number 35 in 2009, integrating its separate vinyl stashes into one sprawling record mecca. Now, one can meander through hip-hop, indie, and jazz at the entrance, head down the new wave, punk, electronica, and dubstep corridor, and wrap things up with the trove of 4/4 club music in the back room. It is perhaps the most overwhelmingly complete selection of vinyl in the city.

Basti has worked at Spacehall for 10 years, and can usually be found overseeing the counter at the front of the vinyl shop. “We try to get better every year and keep the records interesting, so it’s growing,” he says. “Right now, there aren’t so many gaps anymore. We do really well in most of the sections. Maybe the most significant point is that we try to have a balance between the new and used records so we can have good quality used and keep up to date with new releases. Otherwise, we would just have the 60-year-old guys who are looking for another Rolling Stones record that they don’t already have in their collection. Don’t get me wrong, it’s not that we don’t like those guys, but it’s the mixture [that ‘s important]. If we specialize in one thing, I think there would be days when nobody comes, so it’s important to have a broad selection and something for everyone. We try to really get everything that our customers want. It is a business, but it’s more of a heart thing.”

The store’s impressive range may be intimidating, particularly for those making their first forays into Spacehall, but the aesthetics of locale help alleviate any sensation of being overwhelmed. The band shirts, posters and neon rave trinkets by the front door give way to a long, zen-like corridor with calming forested wallpaper, opening up to the huge but dimly lit house and techno section. “It’s supposed to be dark,” says Gabriel. “It happens a lot that people come in from bright daylight outside and suddenly they’re like, ‘oh shit, it’s night’. This is totally what it’s about, getting lost in the music, being there for a long time and digging. This was the idea of the owner. There are a lot of people who might actually not talk so much. If somebody wants some advice, they’re always welcome, but there are a lot of people who don’t talk to us other than coming to the counter and paying.”

There are a number of rumors about Spacehall and its owner, yet for now, they all remain unsubstantiated, as Peter declines all interview requests. Without question, this understated approach influences how Spacehall promotes itself—which is to say, barely at all. There is a simple webstore, but its weekly newsletter was shut off several years ago. The shop’s only notable publicity venture in recent years has been a collaboration with Bavarian web channel electrosound.tv, which has filmed and streamed in-store sets from locally-based DJs Sammy Dee, Jerome Sydenham, Savas Pascalidis, Jan Krueger, and Andre Galluzzi. It seems like an uncharacteristic level of self-promotion at first glance, but unlike many of its peers, who have long since horizontally integrated in-house labels, events, and distribution, the slickly produced webisodes keep consistent with the ethos of Spacehall—the shopping experience is the ultimate focus, and the DJ ultimately becomes just one of the moving parts within the buzzing, hive-like activity of browsers, diggers, listeners, and staff racing back and forth behind the counter with stacks of records in hand.

There are plans for future broadcasts, and late-night, mid-week trading hours have been recently established to better cater to jobbing weekend DJs, but apart from these tweaks, it’s business as usual at Spacehall, and as low key as ever. “There are a lot of people just passing through the store and we don’t recognize all of the faces, but [there are] a lot of DJs,” says Gabriel. “[Some are well known,] but the philosophy is everyone gets treated the same. Of course there are regulars, they come here a lot and can listen at the desk on the PA, but it’s really quite democratic. If you come here, it’s because you like it, and if we’re nice to you, it’s because we like you. Nobody gets treated differently.”