Reflections on the Wall: Twenty Years After the Berlin Wall, AGF’s New Project Straddles the Line Between East and West 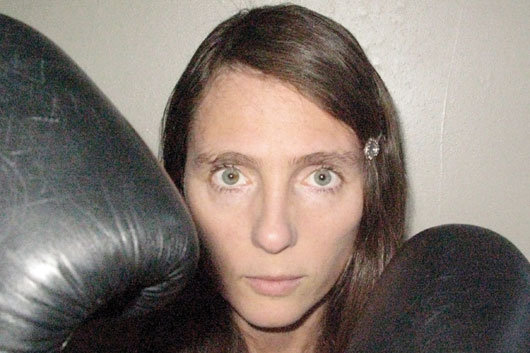 Reflections on the Wall: Twenty Years After the Berlin Wall, AGF’s New Project Straddles the Line Between East and West

Antye Greie has spent the past 20 years trying to make sense of the world she literally woke up to on November 9, 1989. Communist East German society raised her to believe that the Berlin Wall was justified for two decades—and on that fateful morning, both the Wall and her nation were gone. That experience often haunts her poetry and post-techno explorations as AGF, and it’s explicit in her online audio poem, Reflections on the Wall, an oral history specked with shocks of mechanical noise and fragmented vocals. She spoke to XLR8R about the emotional walls she still climbs.

XLR8R: How did the idea for this project ?come about?
Antye Greie: I realized more than a year ago that it was going to be quite an anniversary for me… I spent 20 years in East Germany and another 20 years in the West… I was thinking about it for a very long time and wasn’t sure how I would express everything or what I felt about it. I had set up the website a year ago and even looked for some funding because I wanted it to be an online project. I wanted it to be permanent, and [something] everybody could access… I called it Reflections of the Wall Coming Down, and one day I was sitting in my office and I was staring at the wall and suddenly I saw an insane light… I was looking for where it was coming from and then I realized that it was the sun coming through the window going into a sparkling water bottle; the bubbles’ sparkling made that light. It was amazing. I got the camera out and I recorded it, and realized these were reflections on the wall… I liked the idea of something very abstract to go along with a very personal memory.

What was your experience when the Wall actually came down?
The night it happened, I was in my favorite student club where I went almost every day. I was just drinking beer and dancing when somebody came in and yelled, “Hey, the Berlin Wall is down!” We all looked at him like he was stupid and insane… I think that maybe two people left and checked if it was true—or nobody bothered. I didn’t bother—we just kept drinking, talking, and laughing. Then I went to bed. The next morning, I don’t know if [I heard it] on TV or the radio, but it was a big shock.

Was there any sound or image that stayed with you over the years that sparked this project?
I’ll never forget that image of driving by the Wall and seeing the West for the first time. If you didn’t live in Berlin, you lived somewhere in the middle of East Germany. As a kid, you didn’t know about all that stuff—you knew that we were in a Cold War and the evil West was trying to destroy us; that we had to be strong. This is how they brainwashed us and how I was raised… [But] it’s just humans making stuff up like a border; they forbid other people to go from A to B… I just really realized that whole thing after the Wall came down, and I walked behind it and this is one of my strong memories: I first stood behind the Brandenburg Gate and I looked from the west side to the east side. This emotion and image I will never forget. Everything collapses in your brain…