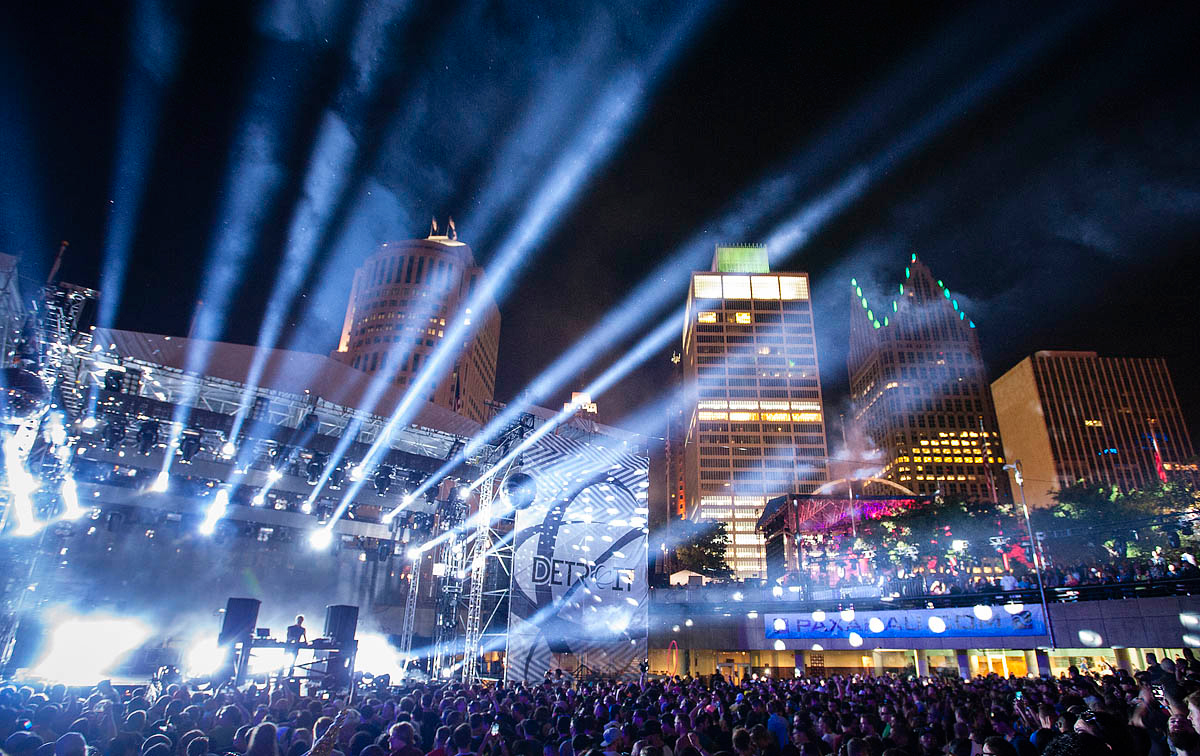 The collection of local and international talent for the downtown festival is a who’s-who list of the world’s best and most innovative DJs and producers. There’s 140 performances over the (now) six stages, and that’s not even counting an intense after-party circuit, which picks up as the festival closes and goes well until the next day for a massive-24-hour-cycle of raging and music. Save for some mid-aughts wilderness years of low attendance and high drama, Movement and the grande dame city that birthed it are rising up for the taglit (discovery) of a new generation. It’s hard not to see quasi-religious undertones in the symbiosis of a city that shaped a new kind of music, leading—years later—to that same music helping that ailing city back up. So put your hands together, not up, for the perfectly timed resurrection of Detroit and Movement.

1. Sunday’s Ghostly International Showcase at the Made in Detroit/THUMP Stage
The local heroes of Ghostly International were wisely charged with curating the lineup all day Sunday on the Made in Detroit/THUMP stage for what was one of the longest and strongest runs of any stage on any day. From Shigeto’s amazing live-percussion set to a spectacular closing set by label workhorse Matthew Dear (who was often hard to hear through the yelps of Dog Blood), the day also featured stand-out sets from Mike Servito, Miguel Senquiz, Fort Romeau, Derek Plaslaiko. But no one could have predicted the best performance that day come from Derek Plaslaiko’s toddler son, whose dancing stole the show. (Look out for his all-vinyl set in 2022 on the Beatport Stage.)

3. The unofficial Berghain reunion on the Underground Stage
True to its name, the Underground Stage not only showcases dark and heavy beats, but was literally underground as well. At times, it became a claustrophobic sweatbox, but that didn’t seem to stop the ardent fans from going off in what resembled a parking garage. It was easy to lose track of time down there with a lack of light, making it feel like an all-night warehouse party inside of a perfectly bright and sunny day. Highlights included Paula Temple on Saturday, Matador’s live set and Nina Kraviz on Monday, and an unofficial recreation of eight hours in Berghain (minus, you know, the sex) with Anthony Parasole, Steffi, Rødhad, Marcel Dettmann and Ben Klock on Sunday.

4. Grandma Techno
72-year old artist and photographer Patricia Lay-Dorsey started going to dance music festivals in 2005 with her friend Pat and 10 years later calls herself “kind of a fixture” at Movement. Diagnosed with MS , she uses a motorized scooter with a “Grandma Techno Hustles Harder” sticker affixed to the front to get around—but that does not stop her from ripping shit up. We watched her bop along to Dubfire’s entire 90-minute set, her VIP–wristbanded hands never dropping below her head as she constantly paused for pictures and danced with her “kids and grandkids,” all the while accompanied by a festival staffer and an entourage larger than Vincent Chase‘s.

5. “DJ” Snoopadelic
You can’t really begrudge the organizers a chance to book big name guests and expanding into non-techno-specific genres. Method Man, !!!, Danny Brown and Skrillex all worked out just fine and probably moved their share of ticket units. And while it was probably the most packed the main stage has ever been, most people rightfully questioned the organizer’s decision to book him at a festival specifically celebrating dance music. Having Snoop Dogg “DJ” at a festival instead of perform live seems akin to asking Richie Hawtin to do an all “ballroom dance set” (which actually would have been way more interesting). He closed out the festival on Monday night, and for a moment, as he took to the stage to the strains of “Tha Next Episode” it seemed like it could be a genius move. That is until you realized that he apparently forgot headphones (and mixer), as everyone was treated to iTunes shuffle-curated “set” including House of Pain, Joan Jett, Black Eyed Peas and Journey. You’d imagine that if you booked Snoop and he was playing this kind of “party-music” set, he might bring a mic out and you know, actually sing along to his own tracks. But no. Waving his hands over his head was the best he could do—and even that wasn’t as energetic as Grandma Techno’s routine, and she’s got him by thirty years and probably had just as many photos taken. Although it is probably the first time Kevin Saunderson and Derrick May, spinning nearby, got drowned out by Icona Pop’s “I Love It”. And hopefully the last.

6. After-parties
At this point the after-hours parties have become a cottage industry unto themselves. One of our faves were the aptly-named Club Toilet, an Avengers supersquad of “gay partying’ U.S.A.’s finest giving you their worst.” The night saw great sets from Chris Cruse (LA), Ryan Smith (NY) and the Black Madonna (Chicago)—while some people, like those in the Gloryhole Room, didn’t see much at all. There was also a rumor that three people got locked in their Toilet Room (that’s Toilet-speak for what you and I might call an “F Shack”) for days after the party ended and, we like to think, had to F their way out. Way less salacious—but way more funktastic—was another stacked 24-hour edition of Soul Clap’s House of EFUNK with Metro Area, Stacey Pullen, Alexander Robotnick, Flashin’ Eddie Fowlkes, Scott Grooves, Catz ‘N Dogz, the Clap themselves, and live performances from Mathew Jonson and ’80s electro act Newcleus. The one-two punch of Paradigm Presents, held on two nights amid the crumbling beauty of the Leland Hotel, featured parties from Innervisions and Visionquest/No.19 Music, with all of the superstars those labels typically bring. The Detroit-via-N.Y.-via-Detroit vinyl-lovefest of ANTHOLOGY’s Bunker showcase, the old-school analog hum of No Way Back (both of which hosted sets from the formerly local/currently unescapable Mike Servito and Derek Plaslaiko) and the tenth annual Old Miami day jam Need I Say More, which we actually do need to say more on.

With no guestlist to speak of, $10 entry all day long, cheap drinks, no bullshit and a 7am start time (with no end time), the Visionquest daytime vibefest was already well on its way to passing into local mythology But for their tenth anniversary, they created something truly special. Packing the bill with a strict adherence to locals who have influenced the Visionquest crew (rumor had it that Joseph Capriati wanted to play but could not), the foursome—who didn’t even play themselves—booked old-school talent including Norm Talley, Mike Clark, Mike Servito, Carlos Souffront and Daniel Bell. But the party belonged to Carl Craig and Stacey Pullen, who hustled harder than anyone in the D—without ever breaking a sweat—in a multi-hour b2b aural history lesson, seamlessly mixing acid, disco, techno and house in what was easily the best set of this year’s festival, and maybe any year…of any festival…ever.

8. Fest worst set: GRiZ tooting his own horn
GRiZ’s set truly accomplished a near impossible feat; it somehow managed to be insulting to both EDM and smooth jazz. Between singing along to his tracks on the microphone, playing hypeman to himself (at least get a Bez or Flavor Flav flunky to do that for you!), and his frequent live-sax interludes, it really is a wonder he had time to locate so many of those huge drops. But hey, the young Southfield native seems like a nice enough kid who loves performing in his home city—the crowd definitely ate it up and it was the perfect lead-in for DJ Snoopadelic, so maybe we’re just old and crotchety. If we were nineteen and our parents raised us on a steady diet of Tupac’s Strictly 4 My N.I.G.G.A.Z.,FruityLoops and George Winston’s December. then we’d probably love this too.