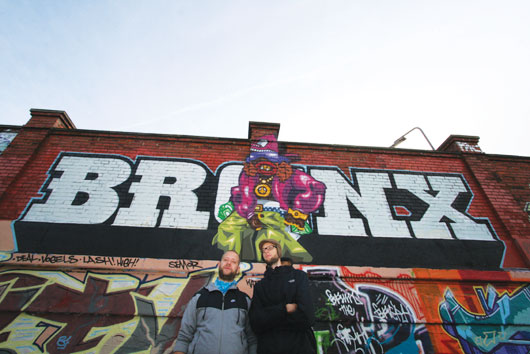 There’s something pleasantly scrappy about the frenetically paced tracks that comprise Munich trio Schlachthofbronx’s self-titled debut. “We’ve got a shitload of unfinished stuff on our hard drives,” says Benedikt, one half of the group’s primary production core, and who prefers to go without a last name. “When we realize it takes us too long to get something straight, we just switch to another session.” It’s hardly surprising for anyone who’s given the group’s Belly Full of Pills mixtape, which made the rounds on the ‘net this past year, a quick listen. Mixed from their first EP of the same name, Belly Full of Pills’ ADD-addled aesthetic threw more ideas into 13 minutes of dancefloor-friendly bass than many producers will generate in a career. Miami bass, reggaeton, techno, hip-hop, kuduro, dancehall, and even bouncy, polka-esque deutsche schlager all converge in a way that’s so smooth and sensible that you hardly notice the beat you were dancing to at the beginning rides on an entirely different time signature and tempo by its end. Punctuated with “silly lazers, sirens, and bomboclaats,” Pills (and Schlachthofbronx’s recently released LP) also features vocals from South Africa’s Slush Puppy Kids, who chant raunchy AutoTuned lines like “Too much girl under that costume/Ass big enough to eclipse the moon” and lend tracks such as “Too High” and “Holdin’ That Dick” even more live energy.

In fact, the group’s tracks all seem so destined to be mixed together that the band didn’t even want to put out a full-length in the first place. “But [our label] Disko B was like, ‘C’mon, make an album,’ so they convinced us,” admits Jakob, Benedikt’s partner-in-crime. (They also count friend Christoph as a “phantom” member of the trio.)

Like their fellow countrymen Jahcoozi and Modeselektor, Schlachthofbronx (whose name tips a hat to their Schlachthof meat-packing-district neighborhood and their New York hip-hop influence) are part of a new cadre of dance music producers that are noisily sidestepping the stereotypical ideas of Teutonic precision—and they’re doing it with glee. As if the airhorn that adorns the cover of Schlachthofbronx weren’t enough of an indication, the heaving bass, hard bounce, over-the-top synth lines, and dutty rap vocals that pour forth from its insides just scream “party!”

“We wanted to make something different and more diverse,” says Jakob.

“We were kind of bored by the way German techno or minimal developed,” Benedikt continues. “And I think many people who make that kind of music felt like that, too… We want to make functional club music in the first place. We want people to have fun and dance, stagedive, and scream! I don’t want to be at a party and wait an hour for one cool, punchy bassline.”