Everyone in Ibiza would be humming their tunes at poolside bars, their whimsical name the […] 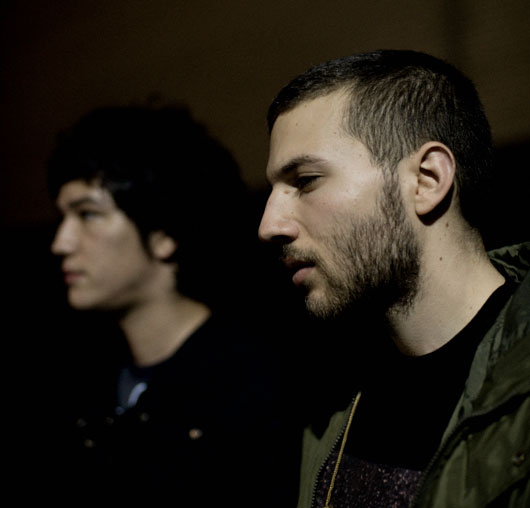 Everyone in Ibiza would be humming their tunes at poolside bars, their whimsical name the […]

Everyone in Ibiza would be humming their tunes at poolside bars, their whimsical name the toast of the town. But that would be too easy, and untrue to the chemistry of the project. The duo‘s psychedelic, highly nuanced dynamic, palpable in everything they release, makes for some of the most personal, original, and exhilarating sounds around right now.

When I speak with the duo of Nick Weiss and Logan Takahashi over the phone, they’re back at Oberlin College, about 40 miles outside of Cleveland, Ohio, where they’re in their final year as undergraduates. They had recently returned for their first week back at school after the summer holiday, having just played to their largest crowd yet opening for Panda Bear on Governors Island in New York the weekend before.

Considering how much touring they’ve already done (they played in Eastern Asia and China earlier in the year, and have gigged across Europe and the USA), it’s remarkable that their studies haven’t been derailed at some point in the last three years. “In some ways, [school] has been frustrating, but in some ways, it’s cool to have something grounding us rather than just playing shows,” explains Weiss. Takahashi studies in a program called TIMARA (Technology in Music and Related Arts), so all of this could, one hopes, be considered fieldwork.

Takahashi and Weiss met three years ago, on their second day of college. Within a week they were jamming together. “We were writing our first song so we could play this party at our school,” explains Weiss, “and we put the songs on MySpace just to show people. We only had two friends on there.” One of their those early friends was 20 Jazz Funk Greats, the esteemed music blog of Tri Angle Records head Robin Carolan, where one of their songs got posted and earned them attention from well beyond their immediate peers.

While incorporating tropes from danceable, bygone eras in pop, R&B, and club sounds, the Teengirl sound rarely coalesces into straight-up club tracks—their narcotic, mercurial jams, tinged with Krautrock and 4AD pop sensibilities, are usually better suited to the home-listening realm. Their sound seems as influenced by Manuel Göttsching as it is by, say, Mariah Carey, whose “Touch My Body” they deconstructed into delirious abstraction.

These styles that they’re reimagining and recontextualizing have been coursing through their veins from a very young age. “My mom used to take hip-hop dance class at Gold’s Gym in LA,” explains Weiss, “and she met this woman who was looking for an R&B DJ, and I produced some tracks for her… I was 11, I think, and had just started making tracks on ACID Pro and other programs. I got a keyboard and started composing with its internal sequencer. She had some songs written and we worked together to do some ballads as well as uptempo stuff.”

The two profess a love for the dark, overlooked corners of the R&B genre. “TLC was one of my favorite bands,” explains Weiss, “and I got really into Blaque, one of their protégé bands that didn’t really end up panning out.” The fan site he created for them (sadly now offline) had much the same sparkly, animated-GIF aesthetic of Teengirl’s Angelfire website, the dated look of which is mirrored in the artwork of their previous EP releases and 7AM, the duo’s debut LP.

The process of writing and recording 7AM began in Takahashi’s parents’ basement in New Jersey back in 2009. “We write most of the songs by jamming, and shape them by playing them out live,” says Takahashi, who explains that both of them are generally writing and performing with synths, including a MicroKORG and a Korg Poly-800, as well as drum pads and a 404 sampler. In the studio, they keep overdubs to a minimum—there is “polishing” on the computer but, as Weiss points out, “there are a lot of unedited live takes in there.”

In rather clever fashion, they were able to use a four-month study abroad trip to Amsterdam for both academic and music-making endeavors. Working in a studio at their Amsterdam school, the Gerrit Rietveld Academie, they mixed a large chunk of their record. Their overseas presence also afforded them opportunities to play all around the UK and Europe, including a Bucharest gig with Andrew Weatherall and an unbelievably stacked UK bill with Joy Orbison, The Bug, Cooly G, and Gold Panda.

Along with the obvious steps up in production and mixing quality, 7AM provides a sustained and ecstatic high, as different as the individual tracks turn out to be. It’s unrepentantly eccentric, and mostly instrumental, its hooks gradually sinking in and holding on with an affectionate yet firm grip, especially on the vocal tracks.

“We wanted there to be one or two tracks that had a really direct influence, that weren’t as abstract,” explains Takahashi of the record’s more immediately accessible tunes. “We wanted the vocal tracks to have a real sensibility, no matter how weird the instrumentation is.” Of these tracks, they seem especially excited about their collaboration with singer Shannon Funchess of Light Asylum, who features on “Dancing in Slow Motion.” Produced during the final recording push earlier this year, this track marked Weiss and Takahashi’s first time collaborating with someone else in the studio. The sound was influenced largely, they say, by The-Dream, whose productions they both deeply admire.

“We wrote it then and there with a bunch of really amazing synths that belong to our friend Tom Arsenault, and wrote the vocal part collaboratively,” recounts Weiss. “We would throw stuff out at her, and she would kind of sing it back to us in her voice, in her range.” The result is a slow-burning R&B ballad as genuinely moving as the songs that have inspired them.

Their use of vocals is equally deft on “Cheaters,” 7AM‘s lead single, which samples Love Committee’s “Cheaters Never Win” to create the truest club single on the record. An ecstatic vocal house throwback, it is all the more powerful among its cerebral surroundings. Even at their tightest, Teengirl’s songs still have a loose, incidental quality to them, making the moments of ecstatic release all the more thrilling. When the synths and drums reach their melodic peak a minute and a half into “In an Area,” the second track on 7AM, the Teengirl sensibility, which may at first seem scattershot, really begins to click.

Their versatility is clear, not only from the range of their own material, but also in Weiss’ non-Teengirl collaborations with two stellar San Francisco-based singers. The handful of tracks he’s done for H.U.N.X. (a.k.a. Seth Bogart of pop groups Hunx & His Punx and Gravy Train!!!!) are poppy, homoerotic house jams. Unlike Teengirl, says Weiss, this collaboration is “not as much about the instrumentation as about having the pop diva/singer right in front.” Just as compelling are the tracks Weiss has produced for singer Alexis Penney, who operates in a more moody, Arthur Russell-esque mode, heartbreaking and wholly infectious.

Teengirl Fantasy’s future activities aren’t set in stone by any means, but it’s clear that Weiss and Takahashi want to keep jamming and expanding their palette. Alluding to a remix they had just completed for Delorean, Weiss says, “It has a freestyle vibe to it… kind of an ’80s freestyle ballad, a So So Def Bass All-Stars sound.” Whether or not that’s the direction that the duo is headed in, the Teengirl party bus is one it would be wise to score tickets for.

7AM is out now on True Panther Sounds.