A peek inside the revered Frenchman's studio. 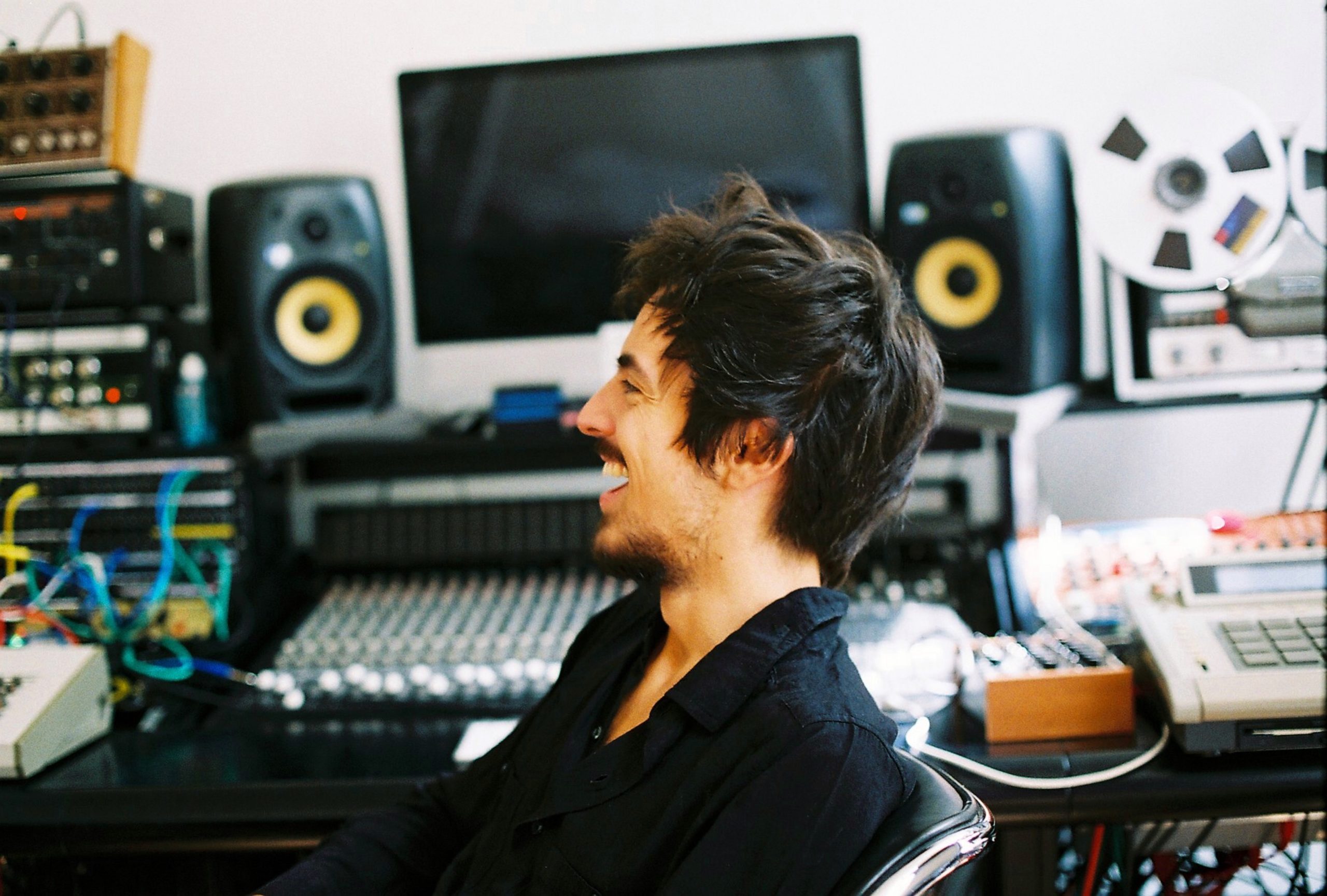 A peek inside the revered Frenchman's studio.

Lazare Hoche—real name Charlie Naffah—is one of French house music’s most revered talents. Born and raised in Paris, he discovered electronic music through his older brother, a professional pianist and singer who kept synthesisers at his home. Aged 18, Hoche began collecting house and techno music, and then attempting to produce it using samplers, a small mixer, and synths, having learned the tropes by those artists in his immediate orbit. He started his own Lazare Hoche Records in 2011 as a student project, and released I Don’t Sync So Part 1., a collaboration with friend Malin Genie, real name Nick Putman, that quickly sold out. (“Oh Snap!”  is a Zip favourite.)”When you have your first release out on your own label and it’s sold out, you then realise you want to continue,” Hoche recalls.

Fast-forward eight years and the 29-year-old has amassed a bulging discography of the classy, slick house that sounds so simple but so few can execute properly. In there you’ll find modern classics including “Pressure Baby” and “String Theory,” plus his collaborative work, including that with Putman and Samuel André Madsen (a.k.a S.A.M) as Mandar. Together they run the Oscillat Music label through which they’ve shared a string of EPs and a debut self-titled album in 2017. You’d have to look hard to find a more refined collection of rolling, groovy house, and for a producer better skilled in making it. Up next for Hoche is the Time Guard EP, a two-track EP landing February 18. In support of the release, Hoche offered to talk us through the key pieces of studio gear behind it.

Let’s begin with a look at the Lazare racks.

Here we have the Schippmann Ebbe und Flut, which is my favorite filter. It’s way more than a simple two-filters box. It has a life on its own; compression, a distortion, a LFO, a VCA, a sample & hold, and two dual envelopes. It’s the bread and butter of my studio; the sound and the frequency range are insane, too.  It’s a semi-modular synthesizer actually, brace yourself in the 68-page manual: not everything is intuitive, to be honest, but once you master it, you are the boss!  Each filter has 12 characteristics, from LPF to every kind of “pass” you can imagine. The CV input and all sorts of modular routing on the rear panel make this unit very useful and it’s impossible that you will get tired of it.  You can hear the Ebbe und Flut in my forthcoming Lazare Hoche “Maths,” as well as in a lot of Mandar material. I use it mostly to create an evolving sub-bass frequency sound; it has a marvelous way of reaching very low sub-bass frequencies.

Above we have the Ensoniq DP4, my favorite multi-effect device by far. I’m a big fan of the Ensoniq sound, especially the converter. Since I saw videos with Timbaland or Alan Braxe jamming the Ensoniq ASR10, finding this particular sound obsessed me. It’s a parallel processor, just like in your computer. You have four inputs and four outputs; you can process up to four sources at the same time. The phaser and flangers are nuts, very Daft Punk before you ask. The reverb is out of this world, and the combination of all the possibilities is insane. Check Mandar’s “Poisoned Words” track, everything is processed in the DP4, every single drum hits individually, with different presets.

Then we continue with the AKAI S-612,  one of the first Akai samplers from what I heard. It appeared on the market in 1985, so I’ll let you guys figure out the memory it can hold: eight seconds max with the lowest sample rate—amazing! Apart from these ancient specifications, it’s indeed my favorite sampler. The 12-bit madness is real with the S-612, and believe me, it’s a fun and simple machine to operate. Everything is in the front panel, LFO, filter, looping, start, and slice faders, and it even has a mic input, so you can directly sample your voice to make it tonal and then play with it on a keyboard. A lot of happy accidents happened to me with this sampler. If you guys like the Herbert-style of production, and a real lo-fi mood, you won’t be disappointed.

Here I would like to present a combination rather than a just one piece of gear. The DX100 is a small bomb—for me, it’s the best FM synth I’ve ever touched. At first look, you can think it’s toy-ish, but the sound is not. Juggling the four FM operators while scrolling through the presets will already send you close to an ‘80s heaven.

Green Velvet’s “Preacherman” is one of those tracks that took its substance from the DX. Not to mention Kerri Chandler’s bass signature preset “Solid Bass.” You can also use it as a talkbox like Roger Troutman.

In almost all the live footage from the ‘80s, you can see a DX synth being played—for example, Michael Jackson’s BAD tour ‘88 or Serge Gainsbourg’s Casino de Paris ‘86. While the whole trend was analog gear, I always had a nag for early digital synths. It fits the mix like nothing else, although the knob feeling is missing; it’s menu time! This little keyboard rocked my world.

The Baby Fender Rhodes is a smaller and more affordable version of the classic Fender Rhodes Stage. It saw the light of day in 1980, all-wooden 54 keys, and it covers the middle range of a piano register, so you can’t do bass or higher range frequencies, but it’s perfect for chords and melodic content. I love to have a chorus pedal behind it to have a nice stereo feeling; it’s super inspiring to manipulate a Rhodes keyboard, even intuitively. It gives an organic feeling; you can hear it a lot on the track Lazare Hoche & S.A.M. “Beyond Synthesis.”

I got into modular around 2013. I checked it out in some synth showrooms in Paris with my headphones, and the sonic capabilities drove me nuts.

With this particular unit I’m more interested in sounds than music. I heard, back then, that Make Noise was a freaky brand doing some very funky and good-sounding modules. I saw that they were releasing a “road-ready” case system, and I went for it.

The Make Noise Shared System is an absolute bomb. I’ve recorded numerous hours of jams and improvisations with it. The sonic experience is out of this world; the delay unit “Echophon” is a crazy versatile module, the VCFA “Optomix” is perfect for those plucky percussive module sounds or what they call low pass gate, which is very effective in modern techno or house productions. The “Maths” envelope generator is also bread and butter for every kind of modular use, I saw that Ricardo Villalobos has some of it in his studio actually, which is always a good sign. The sequencer called “René,” just like Celine Dion’s husband or the French philosopher René Descartes, is a gem, a three-dimensional prism of composition. It’s a total matrix by itself, a new approach of synth sequencing.

This picture is of three delays units I like to use together. They are rough, they are tough, and they are not necessarily versatile, but it’s not what I asked for when I got them—I wanted them to do one thing and to do it good: dub delay. Let’s go.

Everyone knows the Roland Space Echo series, namely the 201, produced from the mid-’70s to the early-’90s. It’s a tape echo delay that records incoming audio to a loop of magnetic tape, then replays the continuous loop over the playback head before it’s erased again by the new incoming audio. It’s warm, gritty, and unpredictable. It has been used in almost all of my productions, sometimes for a synth stab and sometimes just for one hi-hat. It all depends on the feeling. I love to place a phaser right after to phase the delays differently. It’s simply beautiful.

The Roland Space Echo 501 is using the same principle but adding the chorus effect to this beauty (so it’s now delay, reverb, and chorus). It has a lot cleaner output, with a more ‘80s feel than ‘70s. It’s a different flavor and I like to use it on synthesizers a lot. Sometimes I route the two units together to go in this infinite tape loop stuff—make sure to watch out for the feedback as you can create a huge backfire that will blow up your speakers!

The Space Cat Circuit Bent Digital Delay is a small batch company but this unit is an extra large digital delay with three rate controls, brightness, lo-fi, punch, distortion, HPF, two degeneration, dub-back, and three fast lo-fi glitch. This thing is not clean for sure, but it’s wild and warm, and that’s all I ask for in a delay.