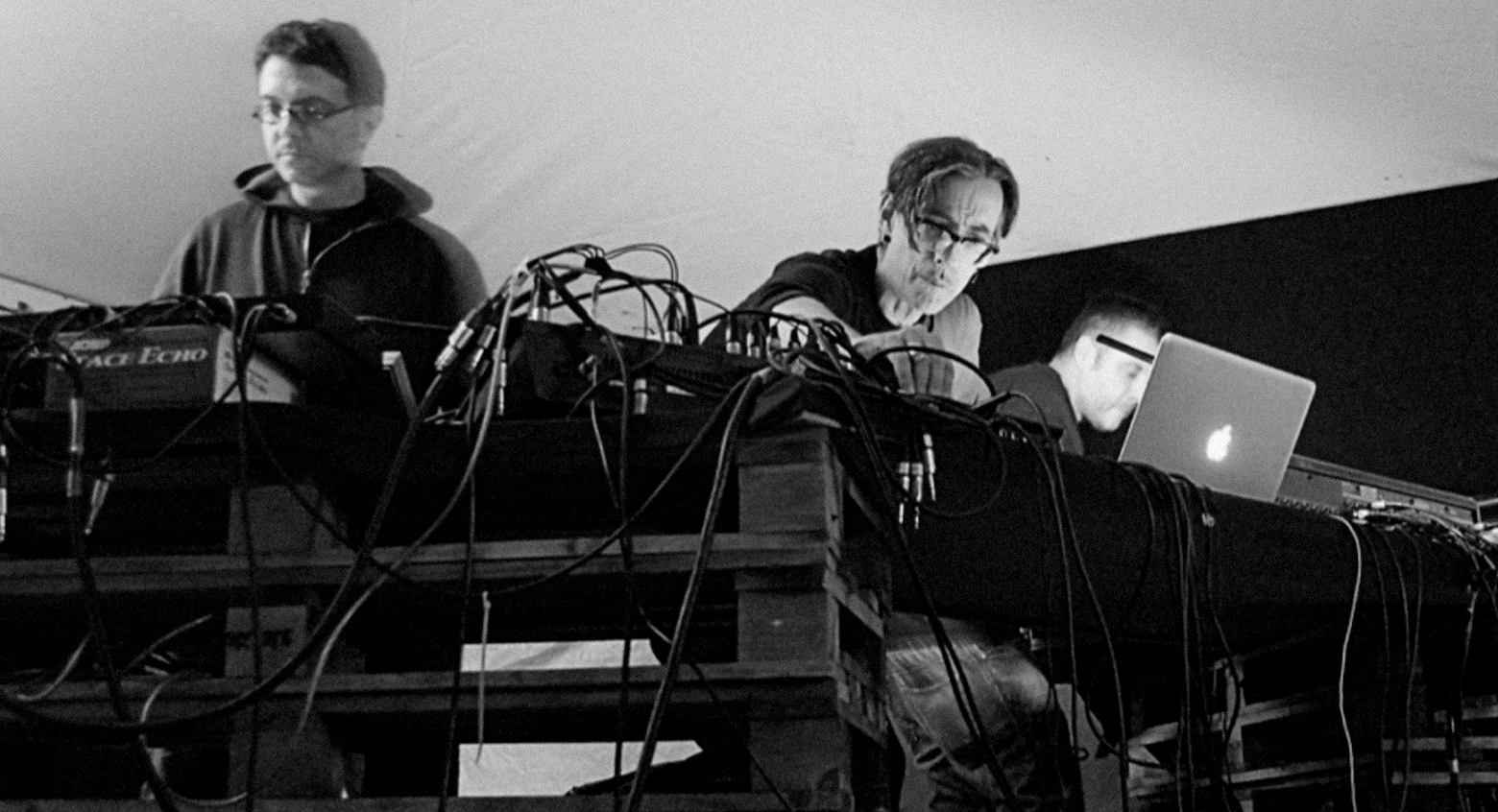 Donato Dozzy has teamed up with Retina.it, the collaboration of Lino Monaco and Nicola Buono, on a vintage-styled minimal wave record, titled Psycho Romance & Other Spooky Ballads and filled with icy synths, shuddering bass, and anthemic vocals to sound like a lost gem unearthed from 1982. The drums hit hard, the synths soar to emotional heights, and the vocals intone rhythmically. All of it’s coated in the warm fuzz of analogue tape.

The alias is Men With Secrets, and the label is The Bunker New York. The three Italians first came together as Le Officine DiEfesto, releasing an EP of murky left-field techno on Dozzy’s own Spazio Disponibile, and in doing so they unearthed a shared love of classic post-punk, wave, and synth-pop, engendering the birth of this latest project, its name borrowed from Richard Bone, an early New York electronic musician and minimal pop pioneer.

Dozzy and the Buono brothers created the album remotely, working from their respective studios in Rome and Pompeii. They selected machines from the ’80s, and used an array of other gear, including some bespoke hardware, in new ways to create the feeling of their favourite records from this era. To learn more about this, we dialled in Dozzy and Retina.it one afternoon, when they explained what they used and why.

We are huge aficionados of the post-punk, wave, and synth-pop era; we talked about it for a long time then at some point we just knew it was time to act and create our own take on things. We own separate studios, because Donato lives in Rome and Retina.it in a town close to Pompeii, in southern Italy, and we produced the record remotely. So we were constantly in contact, and we were all involved each step of the way, even on the minor details, despite the distance between us.

We had no real plan for what we were going to use, and we didn’t think about it too much; instead, we just took it step by step and used what we needed from our collections at any given moment. We leaned towards instruments that best represent the ‘80s because we wanted to achieve the same feeling of some of our favourite records that were produced during this period, like the works of British Electric Foundation, The Normal, Fad Gadget, The Human League, He Said, John Foxx, OMD, and Soft Cell.

The instruments we mention comprise all the machines we used for this record. It’s a mixture of our respective collections of instruments that we’ve owned for a long time. Retina.it’s studio is based around a big modular system built by Nicola Buono, and Donato has a different collection of synthesizers, including some Roland classics and an EMS Synthi AKS.

We commonly use all these instruments with a few others we own to do our respective work, but we used them in new ways across the Men With Secrets record. In particular for this work, we tried to build songs using arpeggios and pads that follow a melody, whereas when we work on techno or experimental stuff it’s different. We were building songs built on successions of chords with different layers of instruments, whereas with techno and ambient this is not necessary, because you’re arranging music with just a few elements, like concrete recordings or noise to create the right atmospheres.

In making the record, we used a variety of synthesizers and drum machines that are still common nowadays, like the Roland TR-808, the Juno 60, a Doepfer MAQ16/3, and an MS-404 for some arpeggio and basslines. These are all outboard instruments, controlled by a MIDI sequencer, and they’re all good for different things, for example the Juno 60 is good for making basslines and also for nice atmospheric pads as texture. However, we used the Doepfer MS-404 as the lead synth. Built in ‘94, it was one the first to clone the sound of the Roland TB-303, but Doepfer added two extra lfos.

This CR-78 drum machine has a really characteristic sound and it was used a lot through the ‘80s, so that’s really why we used it. The machine features a microprocessor for storing patterns, and it offers 14 drum tones that feel electronic but analog. Its sound is unique and warm, and this gives a nice mood to the music you are working on, especially if you intend to make stuff that sounds like that decade. If you are familiar with John Foxx’s debut solo album, Metamatic, or Visage’s albums, you can understand the feel of this machine. We wanted to create this mood, and since Donato has one in his own studio, he said: “Well, I guess I’ll turn on my CR-78, because it needs to be included in this work!”

We decided to add some personality with a variety of pedal effects and even some more esoteric instruments directly built by Nicola [Buono], like a sampler called the DIY. It’s a really basic sampler based on an ISD1820 microchip. Nicola bought the circuit some time ago via a website specializing in electronic components, and he added some features such as trigger in, CV in, loop mode, and pitch slow and fast. Without trigger and CV, you can’t control it remotely with a sequencer. These simple yet versatile functions were mostly used to compose all of the interludes on the record, so the “4th Dimension” tracks.

As sources, we used a vintage collection of 7” vinyl, a present from a friend of ours, who found it in the trash on the street. Since he had no turntables, he gave the collection to us! The records come from the ‘70’s, and they came attached to an encyclopedia of space missions. At that time, these kinds of releases were common and so many people collected them. Across the collection was recorded radio communication between space missions and NASA, plus some white noise signals and some synths sequences, too. There were also some interviews with scientists and radio programmers. This was the space era, and something about the content and the lo-fi recording stimulated us to use them across the record.

Just for fun, we also sampled Donato’s voice from one of his voice messages. We won’t tell which one it is!

We also used a Roland CR-1000 drum machine, here and there. Released in 1986, it was one of the first digital machines to use sampled sounds. It serves as a strong reminder of Paul Hardcastle’s sound signature, which at the time blew us away; tracks like “19” have the pressure and dynamic we’re been looking for. It’s also easy to use via MIDI, which is good because sometimes you need to be fast! All the groove composed on it was then processed through the VC-10 vocoder to get a result like in the classic Herbie Hancock style!

Lino and Nicola bought this one in the ‘90s. The shop owner had it in a corner full of dust. We just asked if he was interested in selling it, and he replied to us, “You can have it for just 100,000 Lire,” which is now about €50. The ‘90s were a good decade to discover stuff that people were throwing away because more digital stuff was invading the market. We used this machine specifically for “Cabaret Demodè,” combining it with the Roland CR-1000.

This machine was built in the ‘80s and it has the perfect large snare, which you can hear on “Dramatic,” and it fits perfectly in the space of the drumming sequence. However, it hasn’t reached the popularity of the TR 808 or 909, even though it was used a lot by artists like Prince. The major downside is that you have to scroll a lot to reach the various parameters, and there are only four assignable knobs on the panel!

For “Secrets of the Crowd,” we used a Rodeo 61 GEM organ, which we paid just €20 for in a flea market. You should really use all of the stuff you find that’s just lying around; this has always been very important to us all. In fact, in the ‘90s we, Retina.It, started to buy electronic instruments, especially analog stuff. At that time, musicians were being taken by all the new digital stuff, so it was common to find old instruments at really cheap prices. So we set about finding instruments that had been dismissed and we tried to get the best from them; we didn’t mind if it was in perfect condition or not, because we were just searching for old instruments capable of making music. We still have some old stuff in really bad condition, and we will always compose music with it because errors can always be used on a composition. Glitch music shows this!

An interesting element of our production is our use of outboard gear for processing sequences. We like to overdub everything with an analog mixer, because sometimes unexpected combinations of results come out. It’s a question of mixing the sounds like an artist would colours. If you know the exact percentage of pigments you want to use, you’ll reach scientific results, but if your approach is driven by senses, you’ll be astonished by the results, and so we always try to be open-minded and welcome new sounds.

We used to go back and forth with signals, sometimes using efx on the results of other signals already processed. Our outboards, as you can see, are pretty old, but we still feel comfortable with them. Here is a list of Retina.it’s outboards: a Lexicon LXP-15 & LXP-1, T.C.Electronic M2000, Sony V77, Roland RSP-550 & DEP-5, along with some DIY projects that Nicola made. On Donato’s side, he added a Korg VC-10 vocoder and a Lexicon PCM 70 Digital Reverb from 1985.

This is Donato’s machine, a hi-fi cassette player and recorder that’s not so common now since it’s dated 1978, but it still works well after all this time. Once the tracks were finished, Donato took care of the mixdown and recorded each of these through the Marantz 5000 and that was it! This added a lot of warmth and feeling, and when we listened to the results, we were all astonished at how this machine and the process had impacted the sound. We felt that it was such an old album playing!

We used the Korg VC-10 vocoder on the voice on “Cabaret Demode,” especially at the end, and on some percussion on “Ruins on Ruins.” It works really well for obtaining the sound of a kind of robot singing. Donato purchased it in 2005 because he was interested in that type of sound, and he later added a soviet Elektronika EM-26 and an EMS Vocoder 2000 to his collection.

‘Psycho Romance & Other Spooky Ballads’ LP is out now, with order here.