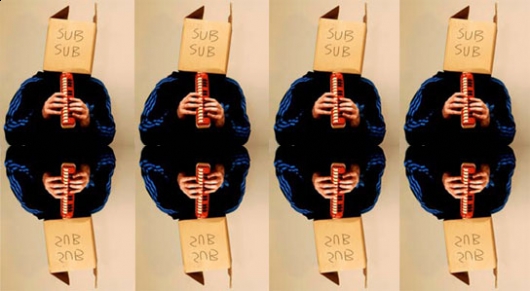 There’s a scene in Steve Goodman‘s new book, Sonic Warfare: Sound, Affect, and The Ecology of Fear (MIT Press), that burns deep into the memory. He places the reader in a 2005 incident where Israeli fighter jets shocked residents in a Gaza Strip neighborhood by flying low above their homes and firing a “sound bomb”—a resonating sound so powerful that it could suffocate your body. “You look around but see no damage. Jumping out of bed, you run outside. Again you see no damage,” Goodman writes. “What happened?” Nosebleeds, anxiety attacks, and sleeplessness reportedly followed. The Israeli government assured that such a bomb was “preferable to real ones,” Goodman later notes.

Welcome to a world where raw sound and music are used either as opiates, repellents, or a call to arms—drifting through the air like viruses. Goodman, who besides pioneering dubstep as Kode9 is a lecturer in music culture at the University of East London, ventures deep into the psychological dread evoked by sound in his provocative and often troubling book. “I wanted the reader merely to be aware of the power relations going on with every act of listening,” he says. His writing was heavily influenced by the notorious scene from the movie Apocalypse Now where General Kilgore blasts the operatic wails of Wagner’s “The Ride of the Valkyries” to terrorize a Vietnamese village while his fleet of helicopters blasts them to kingdom come. But similar tactics that Goodman discusses in the book are hardly fictional: Throughout Sonic Warfare, he points to military weapons used to blast high frequency sounds to drive away looters in the ruins of Hurricane Katrina as well as “Mosquito” street devices that emit an irritating noise that only teenage ears can hear—the same tool sold to scare away rodents.

Kode 9 and The Spaceape – “Curious”

Goodman’s explorations zigzag across history and science fiction, leaving behind a dizzying, often labyrinthine path for the mind to follow. Rather than simply documenting uses of sonic weaponry, Goodman views the war through the lens of various philosophers and artists in an attempt to make sense of how vibrating sounds and their hidden messages affect the subconscious, whether it be the travels of loud dub reggae basslines from Jamaican sound systems or the “earworms” that Muzak uses to tempt listeners into consuming products. And while he doesn’t mention his own music in the book, Goodman is quick to point out that he has “learned a lot from any music that relies on frequencies at the edge of audibility, like dubstep used to with regards to sub-bass.” And since sonic terrorism is invisible, Sun Tzu’s notion of war as an act of deception particularly resonates here.

Goodman wisely avoids writing an anti-sonic war manifesto since there are too many sound viruses in the air—he simply wants to awaken you to that fact that you’re caught in the crossfire. And there’s no cease-fire in sight.