The Devil Inside: Terror Danjah Talks Gremlins, Rhythm’n’Grime, and Nearly Throwing in the Towel 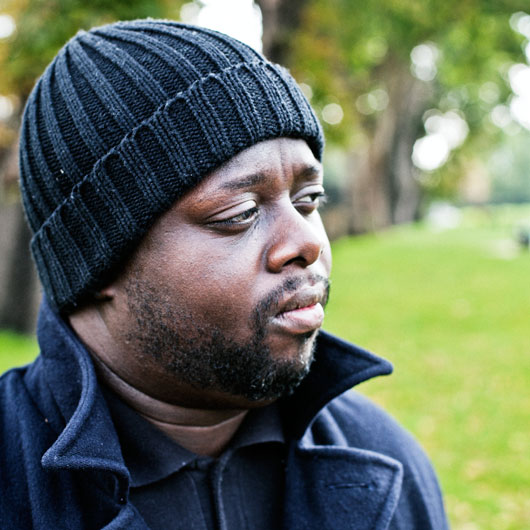 The Devil Inside: Terror Danjah Talks Gremlins, Rhythm’n’Grime, and Nearly Throwing in the Towel

When you have a name like Terror Danjah, “in bed” seems like a weird place to conduct an interview. Of course, it’s midnight in his native London, and despite his aggressive handle, his personality is more than affable, even at this hour, as he asks me if his TV is too loud in the background. These days, the early-30-something producer, who, at least at this point, hasn’t made his birth name known to the press, isn’t having too much trouble being heard.

Over the past decade, Terror Danjah has developed a consistent, instantly identifiable style. His songs—funky, melodic, full of neon synths, hyperactive clacking drums, and cartoonish effects—are hardly a bunch of grungy beats for MCs to scream over. But the most recognizable element of his production is what gave his last album, Gremlinz, its name. “People think it’s me,” he says emphatically of the ‘gremlin,’ the unforgettable cackle that hides in most of his tracks. “It’s not—it’s a sample from a jungle [sound] pack. People started to like it, then I took it out because I was bored of it, and people were like, ‘Where’s that laughing thing? That’s so you, so your personality.'”

Terror grew up on a steady diet of Michael Jackson, Herbie Hancock, Salt N Pepa, “the soul revival thing,” he says. “And so much Mary J Blige,” but it was playing jungle that got him started in the production game, and its fidgety percussion is a trademark of the tracks he makes now. “What made jungle special was the way the percussions and the hats glided into their own pockets,” he reminisces, with a hint of sentimentality. In the early 2000s, he and his cohorts would eventually birth grime, the genre in which he’s now considered legendary. “I think what happened is that all the guys who couldn’t get into garage rolled into grime. Myself, Wiley, the rest of us,” he explains.

Working with top vocalists, Terror’s role was in the backseat, the master producer providing the distinctively funky and futuristic grooves beneath the screwfaced scrimmages of MCs like Kano and Bruza. He released several renowned EPs, a couple of scene-spanning all-star compilations, ran his own label (Aftershock), and became an influential force in the burgeoning grime scene, with his productions all over pirate radio airwaves and grime raves in the mid-’00s. “You couldn’t get away with hearing a set without hearing at least half Terror Danjah,” he boasts.

But he wasn’t exactly a star: To him, there was no way out of grime into bigger things, especially considering the genre’s propensity to undervalue its producers. So he responded with two oversized hits: “Cock Back,” which he calls “the aggiest gun tune ever,” and “So Sure,” a remarkably relaxed and tender tune sung sweetly by grime chanteuse Sadie Ama; even Kano’s verse on the track is gentle.

“So Sure” was such a 180 that it actually heralded a new trend in grime, affectionately known as rhythm’n’grime. “It was a movement,” he insists, and a trend that cemented Terror Danjah as a singular artist. With “So Sure,” and other similarly minded tracks, Danjah managed to twist his twitchy grime sound into something classy and convincingly sensual.”I just made that music because I love neo-soul and R&B and all that,” he explains. It’s grime that wasn’t necessarily aimed at the dancefloor, but rather for the bedroom, for home-listening, for “Sunday dinner,” he suggests. He calls it “Musiq Souldchild on a UK ting,” and casually reveals that his next release will be an eight-track affair that revives the style.

Danjah goes as far as to call “So Sure” his favorite track, describing the vocal as “magic.” The tune’s overtly poppy production—where Terror’s violent and frantic riffs were sedated and coaxed into seductively snaking melodies and feminine flourishes initially proved controversial amongst his ultra-masculine peers. “Crazy Titch heard it and he was like, ‘Ah, that’s crap! You shouldn’t do tunes like that!’ but then six months later he says, ‘I want a tune like that!'” Terror says, laughing. Trepidation quickly gave way to rightful recognition in a big way; even major labels fought it out for the rights to the song, but negotiations fell through and the track was doomed to live out its life as an obscure white-label single, a convenient metaphor for the detrimentally disorganized state of grime music at the time.

Indeed, things started to spiral out of control as grime in general seemed to blunder and jeopardize any commercial potential it had, with notable success stories like Dizzee Rascal eventually moving away from the insular scene. Even post-2004, when times were at their toughest, Terror continued plugging away with Aftershock, but the constant work of managing the label and its artists by himself, with little to no payoff, became too much even for his indomitable spirit. “I was working the hardest I ever have in my life and no one knew I existed,” he says. So, in 2008, he got out.

As luck would have it, last year Danjah was tapped by Planet Mu’s Mike Paradinas to compile a retrospective of instrumentals, and his star would finally receive the apotheosis it had so long deserved. Gremlinz, named after Danjah’s distinctive soundbites, gathered tracks made between 2003 and 2009, and rewrote the twin narratives of grime and dubstep with Danjah placed firmly at the center, making him instantly relevant and, by the time the disc was released, one of the most-talked about producers in the UK. Since then, he’s been on a tear, releasing several EPs for free online, and on Planet Mu, Butterz, Rwina, and Hyperdub, with 2010 proving to be one of his most successful years to date.

“It’s like I’m a new producer,” he says.”I can make an album in two weeks if I really want to, because I’m working like a workhorse. I’m not saying I’m a monster, but I’m a monster. When I made ‘Bipolar,’ I was on the phone!” After a string of EPs (five to be exact, including an eight-tracker), his incredible year has culminated in the Undeniable album on Hyperdub, a confident address on the state of all things Terror. Half vocals and half instrumentals, the album ventures outside of Terror’s usual grime, features vocal spots from Bruza, D Double E, and Mz. Bratt, among others, and even includes the eight-minute “S.O.S.,” which gradually slows down to a house tempo—something Danjah refers to as a “mindfuck.” The album flows wonderfully, no doubt in part because it was assembled by Hyperdub’s resident genius Kode9. “It was more like what he would like to hear,” says Danjah.”It’s what he likes. It made me open up as a different type of producer; most of the tunes on Undeniable I probably wouldn’t have done if it wasn’t for Kode.”

The album is just one volley in what has been a triumphant comeback, a year that’s seen instrumental grime ever on the rise. “Of course I’m a leader,” he says, laughing. He’s started a new vinyl label, Hardrive, which already looks promising, lining up releases from himself, DOK, and Joker, and his work rate is as blistering as ever. However, he’s stubborn that this isn’t some miraculous rejuvenation, but rather a continuation: “People think now I’m consistent. This is not me consistent—this is me having freedom to be me. The last time I was Terror Danjah was the end of 2004. I don’t have to look after 26 artists. Now I can look after me.”

Undeniable is out now on Hyperdub.