The Emerald Forest: With his third LP, Lone takes a 180 and ventures into the deep end of electronic music’s past.

Lone has been the nom de tune of Matthew Cutler for about three years now, […] 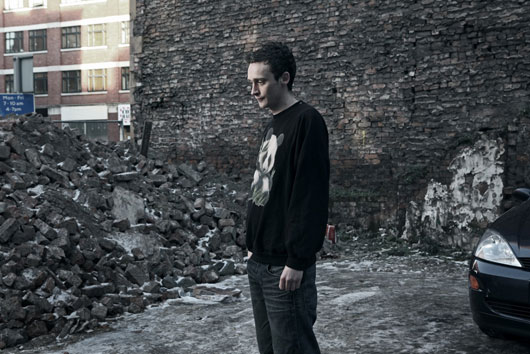 The Emerald Forest: With his third LP, Lone takes a 180 and ventures into the deep end of electronic music’s past.

Lone has been the nom de tune of Matthew Cutler for about three years now, […]

Lone has been the nom de tune of Matthew Cutler for about three years now, when he set off on an ambitious path that would see him release an album a year of R&B-kissed beat music. His first pair of critically acclaimed records, Lemurian and Ecstasy & Friends, bore song titles like “Sungrazer Cascade” and “Lens Flare Lagoon,” and featured blunted hip-hop beats, smooth basslines, and voices of stoned slacker chicks intertwined with Boards of Canada-esque analog haze. On his latest LP, Emerald Fantasy Tracks, that’s all changed.

“The way I see it, I’m only just starting out, really,” Cutler explains, on the line from his home in Nottingham, England. Lately, Cutler has reignited his fascination with the early days of rave, house, and techno, and he used that newfound love to craft the next phase of Lone. “In terms of the big picture, I want to try as many styles as possible. And I’ve always been into the whole old-school rave stuff in England. I just felt like doing something different.”

Cutler remains a thorough lover of hip-hop, but it’s influences like Black Dog, Plaid, classic Detroit techno, and old-school jungle/hardcore producers Manix and Altern-8 that feature most prominently on the new album, a set of more or less straight-up club tunes. While his earlier records aligned him more with LA’s beat scene, the new tracks take a slicker, quicker approach, often built around a solid four-on-the-floor. Last year’s “Pineapple Crush” b/w “Angel Brain” 12″ became the inaugural release for Cutler’s own Magic Wire imprint. “I just started the label because I had a bit of downtime waiting for music to come out that I had signed to labels,” says Cutler. “I thought, ‘Maybe, if I start a label, I can get [my music] out straightaway.'”

But the label, and its music, proved to be more than just a way to pass time; critics and fans became enamored with the new Lone and his UK-rave-infused sound. “It’s worked [out] better [than I expected], actually,” says Cutler of Magic Wire’s first offering. “I didn’t expect anyone to buy it, but they did in the end. Because that went well, and because I’m into this style, I’m really interested in pushing the label in that way—making club music.” To underscore Cutler’s appeal, Kode9 even kicked off his DJ-KiCKS mix with “Once in a While,” another Lone track from the same time, which arrived late last year on Werk Discs.

After releasing those initial singles, Cutler was eager to grow into his fresh aesthetic, so he set out to make the next Lone album. The eight-song Emerald Fantasy Tracks came out in November, just four months after “Pineapple Crush” debuted, and effectively solidified Lone’s transformation into an avid patron of the dancefloor. But despite its 40-minute runtime, Cutler still considers his latest a mini-album. “It’s not really what I would do with a full-length album,” he says. “It’s more like an extended EP, I suppose. [The songs] work together in some way, but it’s not the sort of way I’d generally like an album to work. But that might be the theme in and of itself: the fact that it’s just covering all the different styles of my favorite house and techno.”

One full listen of Emerald Fantasy Tracks proves his point. Songs with invigorating, DJ-friendly rhythms, like the red-hot “Re-Schooling” and “Moon Beam Harp,” mesh with the more low-slung, day-dreamy sounds of “Ultramarine,” the glassy swirl of “Petrcane Beach,” and foggy, somber closer “The Birds Don’t Fly This High.” No matter the tempo or vibe, that wavering transistor-radio style of melodies and textures—sounds that have always helped define Lone—still radiate from within each song’s vibrant core. “Whatever style I decide to work in, melody is the most important thing to me. That’s the thing that will draw together everything I do.” And it’s true—from the onset of Emerald Fantasy Tracks, lovers of Cutler’s earlier records will immediately find a familiar home in the music’s warm atmosphere and soulful themes.

Now, even with a newly minted record label and a substantial series of dazzling club tunes, the busy Cutler simply won’t stay still. “I’ve been talking to a couple labels, and I think I may do another EP of more of the same sort of stuff,” he speculates. “I think after that, that’s usually the amount of time [it takes me to] get bored with [a style], so I might even end up switching to something else by then.” Hardly surprising. Lone is an artist with tenacity and vision—a kind of soul and work ethic that belies his era—and the ability to spread his talents over an array of projects without wearing thin. Lone sees both the forest and the trees. Cutler isn’t bored, per se; he’s just bent on creating a fully formed musical identity—not to mention delivering your next favorite tune.

“Aphex Twin has always been a huge influence to me, and if you look back on his career, he’s pretty much tried everything, in terms of different styles of techno and ambient music,” Cutler starts. He likens the shape-shifting nature of Lone to the iconic artist, and in some ways, it’s not a stretch. “My stuff is inspired by the way he did it, really, trying as many different styles as possible. And it always sounds like him—that’s the thing. That’s something I hope comes across in my music.”

Emerald Fantasy Tracks it out now on Magic Wire