With its uniquely dreamy-but-propulsive style, Axel Willner’s From Here We Go Sublime was a game-changer […] 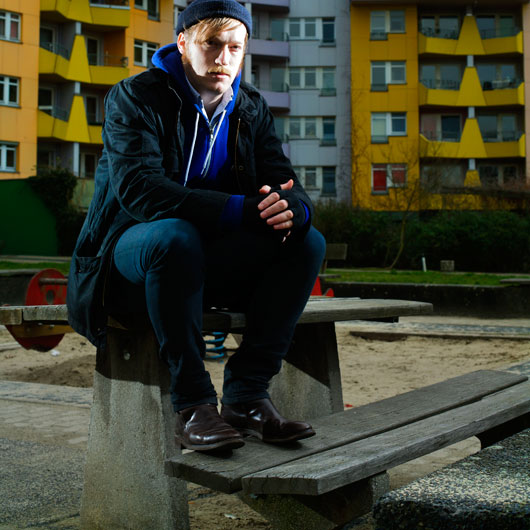 With its uniquely dreamy-but-propulsive style, Axel Willner’s From Here We Go Sublime was a game-changer […]

With its uniquely dreamy-but-propulsive style, Axel Willner’s From Here We Go Sublime was a game-changer when it dropped in 2007. The soft-spoken Swede, who was then working days in a liquor store, fashioned his own distinct style out of spliced rhythms and looped vocals built over gauzy, ambient atmospherics. Widely acclaimed for its innovation, the record introduced him to a world audience and breathed new life into his label, Kompakt. Now, with the weight of increased expectations on his shoulders, Willner (aka the Field) looks to follow-up that album’s success with his latest release Yesterday and Today (released this week on Kompakt). The album grounds Willner’s signature style in more earthly textures – it’s warmer and more organic-sounding but just as thrilling as its predecessor. We sat down with Willner to talk about what went into the creation of Yesterday and Today.

Joe Colly: So your last record, From Here We Go Sublime, was met with pretty wide acclaim. Has your life changed a lot since then?
Axel Willner: Yeah, it’s been quite a big change. I decided to quit my daytime job, and I’m just making music full-time right now. And I moved from Stockholm to Berlin. But the actual fact of playing often and making music often is the biggest change, really.

JC: And you toured a bunch following the album. At what point did you start thinking about the new record and actually recording it?
AW: I was more or less touring until, let’s see, I think the last show was in September of last year. And then we recorded it in November. But there was a lot of pre-production. I invited some of the guys who play with me live to a deserted old school on a small island about one-and-a-half hours outside of Stockholm. Some friends of ours own this old school there, and we thought it would be a perfect place to record. Just to make it as easy and fun for ourselves to do it. We stayed there for a week and just recorded all night and all day, and just had a very good time. People came and people left, it was more of a “come over for dinner and some wine” kind of thing. It was very easygoing and without a lot of structure, very loose.

JC: Did it take just that one week to record the whole album?
AW: To do the actual arrangements and record it, yeah, but as I said there was also a lot of pre-production of loops and stuff. But the actual thing happened more or less on this island.

JC: Obviously your profile increased after Sublime, more people know about you and your music. Was there more pressure on you making Yesterday and Today?
AW: Of course. It’s a hard thing to do, in a way because I was really not expecting From Here We Go Sublime to be received the way it was. I was very surprised. So making the new one was harder at first to start but when I finally got going, it was more or less normal. But of course, you never know, so you’re a little bit – not anxious – but curious about how it will be received this time around.

JC: Did you have specific ideas going into it about how you wanted the record to sound or how you wanted it to be different from Sublime?
AW: Yeah, I did. Of course I thought it would be nice to develop the sound a little bit. And that started before the actual recording. The whole last year I’d been playing with two friends – live drums, live bass, keyboards, and no computer anymore, instead of samplers. We moved away from the laptop as much as we could, even though the Field is very loop-based music, in a way. So, still in the production I was using the same old program that I have been from the beginning, but I still wanted to have this new depth to it with live musicians. I think that’s a big change and it’s more organic and warm-sounding. It’s the same, but different – if you know what I mean.

JC: Yeah, there almost seems to be more of a disco or krautrock element at play here. What sort of sounds were you thinking about incorporating this time around?
AW: First of all, I got back to actual hardware. And started collecting more analog stuff, so that’s also why it has more of an organic feel, or maybe a disco or kraut touch to it in some ways. Also more of the sort of free jamming between the musicians and me adds to that. But of course I’ve been going back to a lot of kraut music and I’ve always liked disco and that stuff too, so maybe that came through as well. But to be perfectly honest, I was a little bit tired with the techno scene, and I wanted to do another kind of music in a way. Still the same – but a fusion, I guess.

JC: And in terms of the production, are you still using the same programs and techniques that you did before?
AW: Yeah, it’s fundamentally the same technique, and everything is more or less built around that. And I still use Buzz, which is the same program that I used before.

JC: I know you were involved with some traditional rock bands and influenced by punk music growing up. When did you first start getting into techno and ambient stuff
AW: Probably when Warp was the most interesting stuff you could find. It’s still a very good label, of course, though I don’t check it out as much as I used to. It was in the ‘90s – around ’96 when I first started to open up to more electronic music. Even though for as long as I can remember, I’ve always been attracted to it. But when you were a thirteen-year-old teenager and you were punk, you weren’t really allowed to listen to that stuff, even though I always found it very interesting. But since my late teens I’ve been into so many different kinds of music, and I choose not to say no to anything. I like all kinds of music, so maybe that’s also why the album is pulling from so many pieces of so many different influences.

JC: What kind of stuff are you into right now?
AW: I’ve been listening to a lot of ‘80s music, actually. And also a lot of kraut still. The latest record I bought was Simple Minds’ Empires and Dance. But I’m still very much into ambient and drone, but all kinds of things. It really depends on my mood, day-to-day.

JC: People talk a lot about a Wolfgang Voigt/Gas influence in your work. Since he sort of set the precedent for ambient techno, how do you build on it as someone who came after?
AW: Yeah, for me, there’s nothing really than can be better than that. He really got it. But of course I’m very influenced by all the stuff, all the different monikers he’s done over the years. I guess you can incorporate the techniques in a way, some of the atmospheres – still different but of course heavily influenced. But I don’t want to compare my own work to his, because I wouldn’t be happy. I’m just honored that people can draw parallels. It’s nice that people hear similarities.

JC: And do you get together with all the other Kompakt folks or are you guys just loosely tied through email and phone?
AW: No, no, I spend a lot of time in Cologne. Especially now that I live in Berlin it’s easier to go there. It’s a really good connection with everyone. They’re all very caring and into it, looking out for each other, and just really good company. As far as a label, it couldn’t be a better fit, if I should be perfectly honest.

JC: Back to the record – Yesterday and Today has more of a spaced-out quality – less tracks but longer ones. Is that something you set out to do or did it just happen that way?
AW: It just turned that way, really. Mostly because of the live jamming to it. And I always liked longer tracks, so it was just a natural change I guess.

JC: It almost reminds me, structurally at least, of the last Lindstrøm record, where there’s only a few songs but lots of space to really delve into them.
AW: Yeah, I agree. The Lindstrøm album, Where You Go I Go Too, is also a very very nice album. I like that type of thing: when one side is one track, or one side is half the track, and when you’re done you flip it.

JC: How did you link up with John Stanier from Battles (who lends drums to the title track)?
AW: I met him around the world, in a way, playing with Battles at the same venues and festivals and stuff. We just became friends and talked about maybe making something together. Then last summer we had a small jam session that we recorded then I made something out of it. We’ve been talking for awhile about just trying to make something happen.

JC: And there are vocals on some of the songs. How did that come about?
AW: We were just sitting having dinner and listening to music, this one song (“Everybody’s Got to Learn Sometime”) came on, and we said, “why not make a cover of this one?” and so we did. That one has actual lead vocals; on the other one (“Yesterday and Today”) the vocals are more like in the background, more atmospheric. You can’t really tell right away if it’s singing or if it’s a keyboard, synthesizer, or whatever. So that one has more of an atmospheric kind of feeling to it. But yeah, that was the first time I ever recorded vocals, even though it wasn’t me who sang, but it was a fun thing to do.

JC: I know you’ve done a fair amount of remixes, do you ever imagine you’d want to do more traditional production stuff, like producing other artists’ albums?
AW: Actually I got that question pretty recently and I said yes. But it’s more or less a track or two. It’s for a Swedish artist called Markus Krunegård, which is more sort of pop stuff. But I’m really open to that sort of thing, and it sounds very intriguing to make something like that.

JC: One last thing I wanted to ask was about your album sleeves. The design’s stayed pretty much the same over the years. What’s the idea behind that?
AW: Yeah, for as long as I can remember, when I started to release, not only with the Field but also before when I had my own small little label, just doing CD-R type stuff, it was the same kind of thing. So it was just a matter of changing the color of the sleeve or the actual writing – it’s my handwriting. It just kept on going for all these years, so I just wanted to keep it up. It would be a shame to break it now. Even though a lot of things are different, I wanted to keep the sleeves as they are.