Track by Track: Martyn Examines His New LP, One Song at a Time

This week, veteran producer Martyn (a.k.a. Martijn Deykers) is releasing his third album, The Air […] 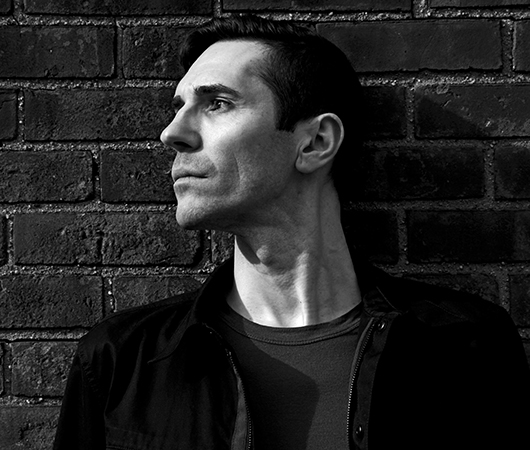 Track by Track: Martyn Examines His New LP, One Song at a Time

This week, veteran producer Martyn (a.k.a. Martijn Deykers) is releasing his third album, The Air […]

This week, veteran producer Martyn (a.k.a. Martijn Deykers) is releasing his third album, The Air Between Words, via Ninja Tune. There has already been plenty of discussion about the new full-length from the Dutch-born, DC-based artist, but in lieu of adding to the speculation about his work, we decided to hit him up directly for a bit of inside information. While many artists prefer to keep things mysterious, Martyn was happy to lift the curtain and give us some insight his latest effort. Taking on the record track by track, he’s commented on many of the processes, influences, and motivations behind the LP.

For the sake of reference, we’ve also procured a full stream of The Air Between Words; it’s been posted below, along with Martyn’s full commentary about each of its songs.

“Forgiveness Step 1”
The album starts with what I suppose is a good example of how a lot of my songs come together: by endlessly rewriting, adding ideas, and (very important) deleting ideas. Some songs I’ve done have gone through 15+ versions before arriving at the end result, while others take me half a day to make. “Forgiveness” is based on a melodic chord idea that Copeland sent me, which she played on the piano. I replayed it and added the strings bit to it and then we added a vocal. Just before the final version of the song had to be handed in, we decided to take the vocal off, and now we only use the lyrics when we play together at live gigs. I like this track because it doesn’t feel like an ambient beatless little intro—it’s got real (musical) meat to it. (See also “Forgiveness step 2.”)

“Glassbeadgames”
I’ve already had so many questions from people on how the collaboration with Four Tet came about, why we decided to work together and whatnot, and to be honest, it’s just not that interesting. You run into each other and decide to do something together, and then you bounce ideas back and forth until it’s done. That’s it. It’s not like he came down from the heavens on a flying carpet and sprinkled magic dust on my track.

A couple of years ago, I was on my way to a festival and was in the car with Frank from Ame, who was reading Herman Hesse’s The Glass Bead Game. In German, it’s called Glasperlenspiel, which I wrote down ’cause that word must be one of the German language’s prettiest sounding words (along with perhaps heimwee and schadenfreude); I bought the book a year later. Also, one of my favorite jazz albums is Clifford Jordan’s Glass Bead Games on Strata East, so the track was named after both of these things.

“Empty Mind”
In my mind, this song feels like the most “straight” house track on the album. To illustrate what I said before about the many many versions I sometimes make of one track, this one was born out of the same sketch as “Be My Own Pupil” that I released late last year to raise money for the Holistic Life Foundation. If you’re interested in Eastern philosophy, yoga, or Zen, you can see the connection in titling here. I especially love the noises in the intro and the outro that kind of invade and disturb the song and bring it to an abrupt end. Those were recorded from a broken analog delay pedal from the ’80s I bought on Ebay. It will still delay the original signal, but turns it into noise with infinite feedback immediately—I suppose that makes it an instrument with one sound now, hahaha. I’m glad it features on the album, totally made it worth purchasing it.

“Drones”
I remember watching an online DJ set—I think it was a Boiler Room session—where someone wore a t-shirt with the word “RAPE” on it, in big, bold letters. Obviously a controversial, blatantly “punk” statement, and I started thinking about how a single word with no attached opinion would activate a variety of things in people’s minds. The word “rape” can trigger all sorts of things; is it about crimes against women, about artists being raped for commercial purposes, Main Street raped by Wall Street… anyways, fill it in yourself. I picked “Drones” as the title of this track for a similar reason; I let you decide what it means to you. Please note I named the track before the NSA scandal brought the word “drones” into the US’ headlines. Before that, only the targets were discussed, never the practice of using the devices itself.

“Love of Pleasure (feat. Copeland)”
“Love of Pleasure” is the only vocal track on the album and I’m really proud of it. I wrote those piano chords, believe it or not, just after my first album, around the time I worked on a remix for Fever Ray. That sketch just kept lingering until I sent it to Copeland, who came back with a real great melody. It was the missing link that needed to be found, to revive the whole idea of the song. After that I (predictably) still needed MANY versions and processing to get to where it is now. My favorite part of the song is its apocalyptic feel, with all the noise, bangs, and clashes going on. When I was recording the final takes, I watched this video of space explosions and other grotesque sci-fi stuff and it fit perfectly—this fragile vocal over a range of clashing springs and explosions, sort of King Tubby meets Hype Williams meets Nitzer Ebb = perfect!

“Two Leads and a Computer”
Someone suggested that the track title was a reference to using analog equipment, which is kind of funny because a computer isn’t analog and neither are Nord Lead synths. I really love the sound of the Moog Minitaur. It’s one of the only “new” analog synths that I’ve listened to that doesn’t sound loud and brash. How many demo videos have you seen of new analog stuff that just does really loud, wobbly basslines? The Minitaur is much more subtle and ’round’ sounding, so I tried to make it sing the lead part of the song. The song is also inspired by one of my favorite ’90s albums: Surfing on Sine Waves by Polygon Window.

“Forgiveness Step 2”
Some of my songs are endlessly rewritten and the early versions often radically differ from the final finished ones. Based on the melodies of “Step 1,” I first went in a breakbeat-esque direction that became “Step 3,” which you can find on the Forgiveness EP, but didn’t feel like that version fit very well on the LP. Long after that, I changed the beats, wrote another new bassline, and did the pads that swell up from the depths in the breakdown. I needed something to carry the track, so I made that FM-style stab sound that binds the whole thing together. The vocal loops are of the original vocal version of the song.

“Like That”
The sexiest songs in techno aren’t about sex. Well, they are very much about sex, but they use suggestion rather than calling everything by name. “In my mind I see us, in a far and distant place/My hands start to caress you, from your shoulders to your waist/I kneel down to kiss you, that’s right you know the place” (K-Alexi “All for Lee-sah”) does much more to me than “Work this d**k/Work this d**k/Work this d**k” (Dj Deeon). Or maybe there’s a time for each? Anyway, yes, I wanted it like that.

“Lullaby”
My brother and I used to be huge into skateboarding; he lasted a little bit longer than me because I had knee and ankle problems, but for about 10 years, it was all we thought about. Well, that and music. Watching skate videos, we got to know so many great bands through the pro segments. The older vids had punk/skate/indie rock music like Black Flag, The Stupids, Dinosaur Jr., and Descendents, but with movies like Shackle Me Not by H-Street, the music selection started to shift to a much wider scope. This song is kind of a soundtrack to a segment that doesn’t exist, hence the sounds of grinds and ollies and squeaking wheels all through it.

“Fashion Skater”
This was the first song that I finished and thought: “Okay, THIS sound, THIS is my new album” and was also the first song I played to Ninja Tune and to some of my friends. It took a while to go from the quite digital, synth sound of Ghost People to a more dusty, earthy kind of spectrum. The process started by buying a new mixing desk and transferring the creative stuff from the computer to the desk. I don’t want to take away from the listening experience by just talking tech; in fact, I think there’s way too much focus on the technical side of electronic music already, more than with guitar bands, for example. (Although there are freaks everywhere.) But a lot of the riffs on the album were recorded live (playing and/or doing the effects). There are also a lot of “mistakes,” but they need to be there so you can literally hear my “hand and heart” in the music, not just the things I imagined and programmed which were then executed by the computer. This is the same reason why I sample my own breathing, kids playing below my studio window, and all of those other sound sources.

I want the listener to be that up close and personal; you can listen to the music on headphones and subconsciously, you know it’s the real deal and not just something some Dutch guy made to advance his career, get gigs, become famous, or whatever. It’s purely a personal expression. The one sound I remember most from Flying Lotus’ Cosmogramma is the sound of the breathing machine he recorded in his mom’s hospital room; isn’t the rest just merely (great sounding) detail? I think that sound alone made the entire album make sense to me, and it would be amazing if my own album could be that meaningful to someone out there.