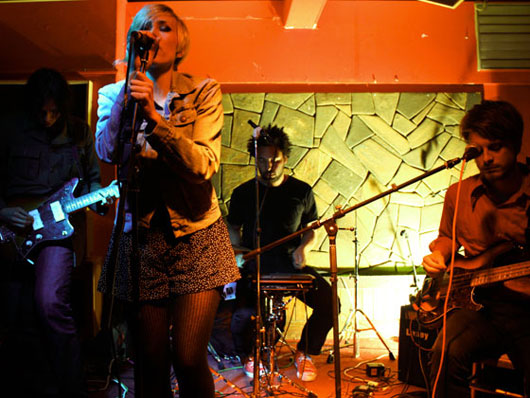 Born in the midst of the last decade’s dance-punk mess, London four-piece Trailer Trash Tracys sought to carve out a different kind of musical space using pared-down instrumentation, cavernous reverb, and moody pop nostalgia. The band’s core members, Susanne Aztoria and Jimmy-Lee, have recorded a handful of precious, painstakingly crafted songs over the last three years, and were putting the finishing touches on their debut full-length—set for release in the fall—when we caught up with them at home.

Your music is hardly trashy. How did you settle on that name?
Jimmy-Lee: Susanne’s from Gothenburg, Sweden, and she knew about this pretty trashy death-metal rock bar in Stockholm, Trailer Trash Tracy’s. We took that name, and it was always supposed to be changed, but we never got around to it.
Susanne Aztoria: When you hear the name, you’ll probably think of a completely different band, and we quite like that.

What kinds of things do you consider in the songwriting process?
JL: A lot of music out there’s really got too much stuff going on. It gets messy. When we first started, we were getting set up with all these electro-punk-type bands. Whatever The Rapture or Interpol were doing with their bassline a few years ago, we decided to do the opposite. That’s why we have just a few hits on the string. Because we’re recording all our own stuff—and we’re not great producers of any sort—we want things to be a bit bolder by keeping the basic framework minimal. We like everything to breathe a bit. We try to avoid keyboard and padding [because] the reverberation and echoes we use kind of fill that space.

How do you know when a song is complete?
SA: It never is! Even [our early single] “Candy Girl,” to this day, we thought we would change.

Your music reminds me of the Cocteau Twins. Am I horribly off-base?
JL: That’s Susanne’s favorite band. I mean, when we started doing this project, we were listening to Cocteau Twins and other shoegaze bands, obviously. We were trying to focus on these bands and become our own band. These were the things that [excited] us at the time.

Have you come across any comparisons to your music that you absolutely disagree with?
JL: Some independent record shops say Glasvegas and Raveonettes. I don’t mind The Raveonettes, but Glasvegas I mind.

What do you hope the people listening to your music will experience/feel?
JL: When we sit down to write a song, the music is reflecting me and Susanne, and how we are as people, I guess.
SA: And the kind of world that we live in. It can be quite miserable!