Benoit & Sergio (a.k.a. Benoit Simon and Benjamin Myers) have only been playing live for […] 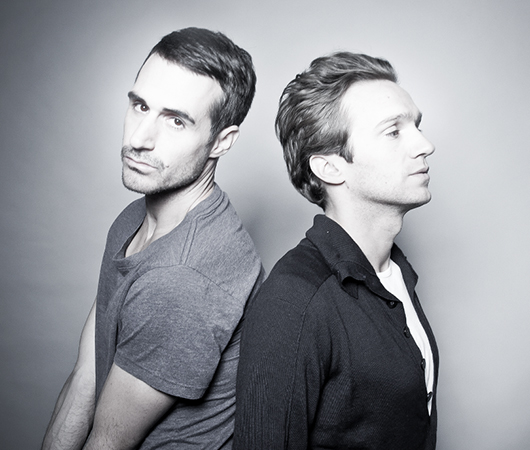 Benoit & Sergio (a.k.a. Benoit Simon and Benjamin Myers) have only been playing live for […]

Benoit & Sergio (a.k.a. Benoit Simon and Benjamin Myers) have only been playing live for two years, and when the pair first began to hit the road, things didn’t always go smoothly. Fresh off the release of the Bridge So Far 12″, we asked the duo to recount one of its more harrowing on-stage experiences, and the pair immediately began describing an unusual night in Russia. “There have been many [bad experiences], but the others we’ve just blocked out,” says Myers while Simon chuckles in the background. “This one is impossible to block out.”

Benoit Simon: Where to begin? There are too many stories to tell, but this is the one that we find ourselves retelling the most these days.

Benjamin Myers: It was our second show ever at this big club in Moscow. It was two years ago.

BS: It was at this big, epic rave club.

BM: Yeah, it was this big club and it was during winter, so it was cold and dark. It was hard. We were just not prepared. [Plus,] we were playing with people we didn’t know and didn’t really have much musical affinity with.

BS: Somebody big had dropped off the bill. It started like that actually.

BM: Oh yeah! It was supposed to be with Seth Troxler, that was it. We were supposed to play with Seth because we had just put out the Visionquest record. It was this Visionquest night, but Seth couldn’t make it because he’d torn his passport. It was ripped and when he went to get his Russian visa, the Russian embassy said, “No, we won’t let you in the country because you don’t treat state property well.”

BM: We were there at, like, 6 a.m. to play a live set. It was our second show ever and we had maybe 50 minutes of material, and they were like, “Can you play for two-and-a-half hours instead?” The cherry on top of everything was the dancefloor. Seth wasn’t there, we showed up and they were like, “Play for hours,” then we got up to the dancefloor, and there was this swing in the middle of it.

BS: One speaker was blown too. They had this big, big wall of speakers—custom made, but Russian style—and then we had two people on this swing on the dancefloor, two girls.

BM: It was amazing! So they were swinging back and forth and there was no one else on the dancefloor. It was this impossibly long, torturous hour. This dude was in the back the whole time, and right toward the end of the set, we played a track he knew, “Boy Trouble.” There was this one—just one—bass note at one point in the track and we were playing and it came to that point and we heard this guy just go “BOM,” right on key with the bass. That was the one form of love we got that night. We did rise to the challenge of keeping the girls swinging, but I don’t think it was really a challenge—they were sort of out of it. A week later, our friends No Regular Play went to play the same night at the same venue, and [they put on “Boy Trouble,”] the same track that we had played. They did a video of the crowd, and it was just going bananas. There was no swing. It was just a packed crowd and everyone was going nuts on this track of ours. We were like, “I wish that would have been us a week ago.” That was a pretty dark night for the soul, for sure. It was like, quit your job, start touring, and two people on a swing is your welcoming.

BS: Another thing. Of course, around seven or eight in the morning, the promoter didn’t want us to leave. Classic. He’s like, “No no, stay. Why do you want to go?” I think around 10 or 11, I was like, “I think I’m gonna go now. I’ve kind of had a rough night.”

BM: Yeah, at first the promoter didn’t even welcome us, and then he wouldn’t let us leave to catch our flight. Things have only gotten better from that point on. It could only go up from there.