For this edition of Trainwreck, we spoke to NYC DJ/producer Brenmar. He’s been relentlessly touring […] 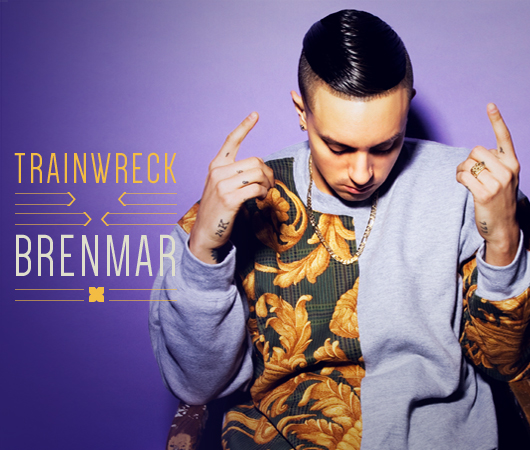 For this edition of Trainwreck, we spoke to NYC DJ/producer Brenmar. He’s been relentlessly touring […]

For this edition of Trainwreck, we spoke to NYC DJ/producer Brenmar. He’s been relentlessly touring for the past few years, and has presumably grown accustomed to hopping around from place to place, but on occasion, he still finds himself in dire straits. Here, he details an unnerving travel situation, one fraught with tedious pilot announcements of stormy weather, low jet fuel, an emergency landing, and a down-to-the-wire race to make his first DJ gig in Atlanta, soundtracked by small-town country-music radio.

So I had a show—this happened maybe two-and-a-half, three years ago. It was the first time I was playing Atlanta. The party was called Sloppy Seconds, at a venue called Drunken Unicorn. Really dope party, super fun. It was my first time, and they kind of made a big deal out of it. They were promoting it and had made up this crazy flyer for it—it was gonna be a good show. And this was Atlanta—I love Atlanta music and was excited to go play there for the first time. I had a show in San Francisco the night before, a Friday. So I played San Francisco, the show was cool, and I left the next day to fly out to Atlanta. I had a layover, so I was flying from SF to another city—I think it was Jackson, Mississippi—before going to Atlanta. And I’m already flying from the West Coast to the East Coast—I’m losing hours, basically. So I’m on the flight, everything’s good, whatever, it’s chill. Then at one point the pilot gets on the intercom and announces that there’s bad weather wherever the layover is, and that we’re running a little low on fuel, so we have to kind of chill in the air. So we pull over in—I wanna say it was Knoxville, Tennessee—it was pretty close to Atlanta, but it wasn’t Atlanta. So we pull into Knoxville, and already I’m cutting it kind of close; I was supposed to play at midnight in Atlanta, and I think by then it was 8 p.m. I’m getting a little worried, because not only do we not know how long we’re going to be in Knoxville, but even if I leave Knoxville anytime soon, I’m going to the layover city, I’m not going to Atlanta.

So we’re on the runway for maybe like an hour and a half. It’s definitely past eight, and I start freaking out. I’m texting my booking agent like, “Yo, I’m stuck on the runway here.” And even if we do leave anytime soon, I’m gonna end up stuck in whatever little city the layover is in, because I’m not going to get into that city until after 10, and it’s a small city—I doubt they’re going to have a flight past 10 p.m. going into Atlanta. So we’re trying to figure it out. I’m texting the promoter too trying to let him know the situation. At one point, [the pilot] gets on the mic, because we were on the runway for a while, and I think by law you have to give the option to get off the plane. So they say, “Okay, if anyone wants to get off the plane now you can, but you can’t get back on.” So I’m stuck there and I’m stressing because the show was a big deal, they were promoting it, and I really wanted to play. Plus, I was going to lose money if I didn’t play too, so not only do I miss out on a fun party, but I’m actually going in the red for it.

So I start doing a little math with my booking agent, and he tells me that if I rent a car I can drive from Knoxville to Atlanta, but it’s going to take me three to three-and-a-half hours. So that’s option A, what’s option B? Wait here, and then fly into the other layover city, and then definitely not be able to make it. If I fly into this layover city then I’m probably going to be stuck in this random little town overnight. So I get off the plane and just run to rent a car. Luckily they have a car available. I didn’t even know necessarily if they were going to have any cars to rent, or if I was going to be able to rent any cars at that hour, because it was kind of late and it was fucking Knoxville—a small little city. I don’t specifically remember what kind of car I rented—I know it was all white. It was kind of a weird one; I opted for the cheapest one.

So I call the promoter and I’m like, “Yo, I’m thinking about driving out to the venue.” And he was like, “That would be amazing. We’ll pay for it if you want to do it.” But you know, he wasn’t pressuring me to do it, because it was a three-hour drive, I had just gotten off of a plane, all this shit. I was stressing the whole time. So I rent the car, and the first thing that I notice is that the auxiliary input on the car doesn’t work, so I’m stuck with the radio. I had to buy a car phone charger at some point just to keep my phone alive, just because that was giving me directions to get to Atlanta. I was going to use [the charger] to at least play some music or something, but I couldn’t even manage that. So I was stuck with shitty country music, or just random talk radio, for three hours—I was just racing. I stopped at Subway, was like eating a Subway sandwich while I was racing down the road. My mom calls me, she’s like, “Where are you?” I’m like, “Driving from Knoxville to Atlanta,” and she’s like, “Why?!”

I was updating the promoter as I was going—”Okay, I’m two hours away… hour and a half away”—my phone is literally telling me how long it’s going to take me to get there. But I make it! I get to the fucking venue, I make it to Georgia, I get to Atlanta. I don’t make it there until about 12:50 a.m., and I was supposed to play at 12. So they had Daniel Disaster (from Heroes x Villains), who was going to close the party—he’s like ATL native, he knows the party, he was going to shut it down. I was kind of the new kid on the block. But by default, I ended up closing the party. When I walk into the venue, they’re on the mic, kind of updating the crowd a little bit too—they had been like, “Brenmar’s an hour away!” or whatever. But finally I get there and get up on stage, and people are just handing me bottles of vodka and blunts in the club. I’m just like, taking tokes and I take a couple sips and I get on and I do my thing and shut it down. It was super fun; the show was great. But it was definitely the most effort I’ve ever put into trying to make that set.

And then that was it. I had to be out the next day, and I still had the car, so it was kind of cool, I was driving around ATL and shit. So I made it, I played, I got to play an hour, everyone was into it, and the show was cool. It was stressful, but it was also really nice to get it out. I made it safe and sound, no crazy shit, no speeding tickets.

I’ve been back to that party a couple times, and it’s always been really fun.