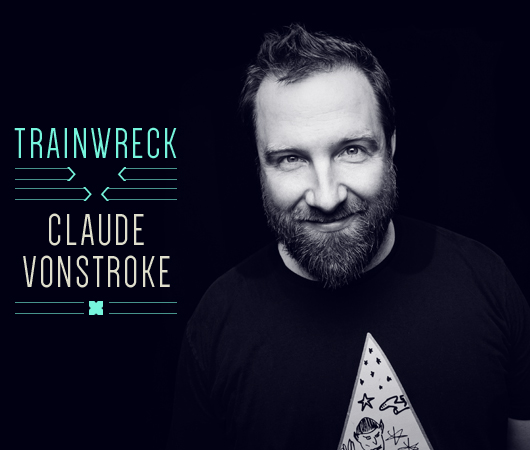 By dance-music standards, San Francisco’s Claude VonStroke (a.k.a. Barclay Crenshaw) is practically a household name at this point. Since founding the Dirtybird label in 2005, the producer has consistently delivered infectiously bassy hybrids of techno and house, which he routinely injects with healthy doses of humor. Urban Animal, his third and latest album, finds him continuing this tradition, and notably features a collaboration with Chicago ghetto-house mainstay DJ Nehpets, a unique addition to Crenshaw’s wide array of musical associates. (His Discogs page features everyone from Bootsy Collins to Girl Unit). However, one doesn’t acquire such a bubbly, worldly reputation without suffering a few mishaps along the way. They’re even still happening to him. Our Trainwreck series usually serves as a catchall for line-of-duty mishaps, whether they happen in the club or not. Here though, Crenshaw details a few actual trainwrecks, from his most recent to the one that started it all.

I just got up on the stage in front of 15,000 people in Chicago at North Coast Festival, and the monitors were like two seconds behind the mix, and the entire soundsystem was right under my feet. I don’t know if that makes any sense, but basically there was no possible way to mix. I started just watching the LEDs on the mixer, thinking of every possible track I could think of that had a washout, or a weird ending, and I was like hard cutting between stuff, backspinning out of tracks. I put a whole set together of crazy drum & bass breakdowns. Everybody at the end was like, “That was the greatest!” and I was like, “Oh my god, that was not the greatest.” [laughs] The reason that I brought that one up is because I’ve been doing it for 10 years, so even though that was completely terrifying, I was like, “Whatever, I’ll be fine.” Because after you’ve been through a bunch of bad ones, you’re like, “Okay, I can just make it happen.” So I think the worst ones for everyone are always going to be in the beginning. And my worst one, psychologically, is not going to sound that bad, but it was definitely the worst one ever.

I had just put out my first big tracks, and I’m on maybe my second or third trip total to Europe. And I’m playing in Fabric for the first time ever. I’ve heard about Fabric forever, you know, I’m going to Fabric, it’s Fabric’s birthday party. Everybody’s there—publishers are there, managers are there—in the booth is the owner of Ghostly, Matthew Dear, Rob Mello, all these people. I’m already terrified anyway. I keep putting my headphones into the headphone jack on the mixer, and I can’t really hear anything coming out of the cue. But I think it’s my fault because I’m so green. I’m just like, “I’m not going to say anything, right? I’m fucking it up. It’s not them, it’s me.” So I can kind of hear it and I’m like, “Maybe it’s just this mixer, and my headphones aren’t loud enough and I’m just going to have to battle through this.” So I put on my first record and completely trainwreck into the second record. It’s basically the first time anybody’s heard me on a big platform in England ever. In my brain and my heart and my stomach, I thought that my whole entire DJ career was over. For some reason, that trainwreck never leaves me, ever. I can never forget it. And then, as soon as it happened, the sound guy came over. In Fabric, they don’t ask you why you fucked up. They ask you if everything’s okay. [laughs] That’s like their trick: “Is everything okay? Are you sure everything is okay?” I’m like, “I don’t know, I can’t really hear out of the headphones.” And then he puts on the headphones, and then he does a Fonzie and just bashes the headphones into the headphone jack, and then it’s full volume for the rest of the gig. But I still feel like shit. I never forget it, it’s scarred into my brain.

In a similar situation, on the same trip or the trip right after, I was on Pete Tong’s [show], my first time ever on Radio 1. They just put me in the studio and they’re like, “Most of the time everybody just records this and sends it to us, but we’re going to make you do it live.” And it’s like a live 20-minute mix while they just chat in the other room. Right before I go on, the engineer comes into the room and goes, “I’m really sorry, but we’ve never really got this DJ set-up to work correctly, so there’s going to be a one-second delay between the monitors and the headphones. But you’re going live on Radio 1 at 9 p.m. Right now. Go!” [laughs] Trying to do the math in your brain of one second off is so much harder than DJing. That was a total nightmare as well.