Trainwreck: DJ Slugo Recounts the Time He Found Himself in the Middle of a Hotel Room Brawl

DJ Slugo was one of the key players in Dance Mania’s mid-1990s heyday. He’s possibly […] 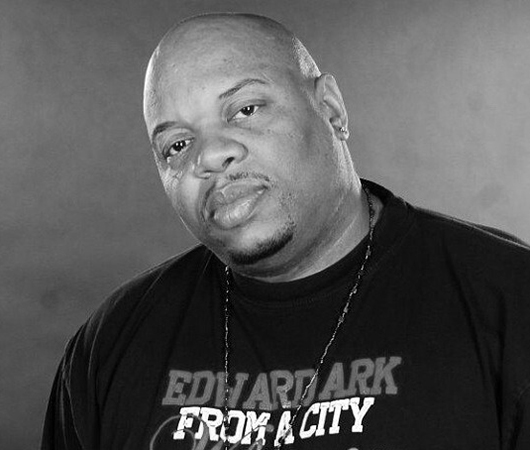 Trainwreck: DJ Slugo Recounts the Time He Found Himself in the Middle of a Hotel Room Brawl

DJ Slugo was one of the key players in Dance Mania’s mid-1990s heyday. He’s possibly […]

DJ Slugo was one of the key players in Dance Mania’s mid-1990s heyday. He’s possibly best known for “Wouldn’t You Like to Be a Hoe Too,” but Slugo also authored countless other hits, including “Smoke-N-Ride,” “A Blunt,” and “Freaky Ride,” all of which exemplify how well his inimitable, quintessentially ghetto house touch still stands up today. Considering the heavy interest in that period as of late, it makes sense that Slugo would turn up again to school the younger generation as he has on ‘King Of Ghetto House,’ his latest EP (although its appearance on Nicolas Jaar’s Other People label is certainly a surprise). Beyond its compositions, much of ghetto house’s appeal stems from its raw, slice-of-life sensibility, and it would follow that a forefather like Slugo has had his share of moments—positive and negative—to draw from. As such, he seemed like an obvious candidate for our ‘Trainwreck’ series, and once we got him talking, he shared this fairly ridiculous story of cowardice and bravery.

We were in Louisville, Kentucky. Of course, we got there in the daytime so that we would be there [in time to] DJ that night. We had walked around and hung out so much that we were tired. So we went back to our hotel room, and we weren’t scheduled to play until like two-thirty or three in the morning—maybe four. [The promoters] already gave us a deposit, and we got there [to the venue]—we had no fuss when we got there, so we went back to the hotel to get some rest prior to going back to the party. And the party happened to be near the downtown area. We called a cab, and tried to get as close as we could to downtown. But they had a marathon going on that started at like three-thirty, four in the morning, and you know when a marathon’s going on they cut off all of the streets, so you literally couldn’t get downtown at all. We were playing the last hour, hour and a half—we were closing [the party]. It took us literally an hour to even get to the [venue], and by the time we got there, the party was over! We had to walk like seven or eight blocks—maybe more. Even the promoter was trying to get to us. It just didn’t happen. But it got worse.

I gave them my balance back. The DJ that was with me, I told them that he already took the money, because [he told me he got rid of it already]. Now, about two or three hours later, two guys show up to his room. And he’s not in his room, he’s hangin’ out in my room because we had about two or three hours before our flight. And they sent two guys over there to get the money from him. They went to his room, no one’s there. Then they came to my room. I was like knocked out, asleep. They knocked on the door, and he opened the door, and I woke up. When I sleep, I put the covers over my head. I heard the commotion and I pop up from under the covers, and they were shocked because they didn’t know I was laying under the covers. I popped up like, “Who are y’all? What’re you doing in my room?” They’re threatening the other DJ, saying, “Nobody is leaving this room until we get the other dollars.” I stressed that I gave back [my balance], and that nobody is gonna hold me against my will. Down in the corner—there’s two beds in the room—[the other DJ ducked under the covers in the corner]. I grew up fighting, all my life, and I box, so I was like, “Whatever y’all got going on, that’s between you…” Then one of the guys locked the door, and it just turned into an all-out brawl with me and the two guys. The fight spills out into the hallway—all-out brawl—[and the other DJ] never comes from up under the covers out of the corner! The maid in the hall screamed “Go and get the police!,” security ended up coming—the two guys ran, and they grabbed one of our record bags and took off! When the thing was all over with, we ended up finding our record bag under the stairs—they threw it because it had too much weight.

So [later], we get on the plane, we get a police escort all the way to the airport from the hotel, because they want us to get out of town for causing that commotion at a four-star, five-star hotel. They wait until we get on the plane. When we get on the plane, I asked the DJ, like, [“What was so important?”], ’cause I don’t remember you needing [the money]. I’m so angry that he didn’t come from up under the covers to see what was going on. Needless to say, he had his money on him the whole time and just didn’t want to give it back. So I was like, “You’re gonna give me all of that money or we are going to fight on this plane!” He was like, “It wasn’t our fault that we didn’t DJ,” but it was! It was our fault and their fault. I called the promoter and told him he had it on him the whole time, if you want me to send it. And I sent it, ’cause I want to make sure I get more bookings. And he was like, “Nah, keep it, you earned your half.” I never went on the road with that DJ ever again.