Scratcha DVA (a.k.a. Leon Smart) is an animated guy. (We thought so even before he […] 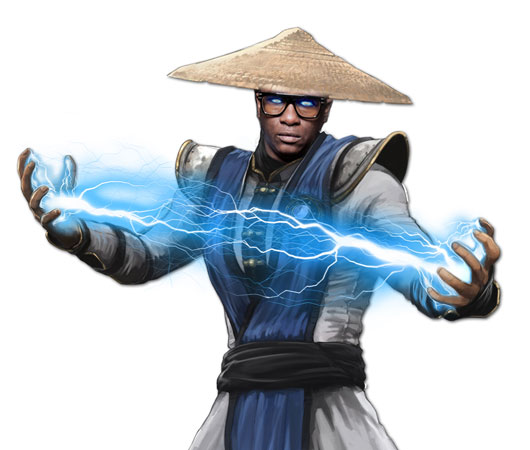 Scratcha DVA (a.k.a. Leon Smart) is an animated guy. (We thought so even before he […]

Scratcha DVA (a.k.a. Leon Smart) is an animated guy. (We thought so even before he sent over the above depiction of himself as Raiden from Mortal Kombat.) His productions are obviously the work of an extrovert—check the wonky exuberance of his recent Fly Juice EP on Hyperdub for proof. And as the longtime host of Rinse FM’s Grimey Breakfast Show (he’s since switched to Hyperdub’s less frequent program), DVA frequently peppered his sets with his own hilarious charisma. However, there’s nothing funny about this harrowing tale from his early days. At the height of UK garage, Cyprus’ Ayia Napa was the setting for a story of mistaken identity, police brutality, gruesome bloodshed, and more.

You know Ayia Napa, when everyone was going there? Not now, cuz it’s different [now]. But I went there in 2002, so 10 years ago—garage days. I wasn’t a proper DJ or anything like that, but I had records—I wanted to be in the scene, so I just took loads of records out there, and hustled loads of DJ sets at [venues] like Twice As Nice and Faces, known places. Anyway, I played in one club—can’t remember what one—and I was with a few of my mates, cuz it was a bit of a holiday as well. I left my mates in the club—I said, “Listen, I’m going to take my records back [to the hotel].” I took my record bag, winged off on this moped. I go back to the hotel, and the door was open. This is like a chalet as well, it wasn’t like in a hotel where you’ve only got the room—the room was on the street.

The door had been kicked open—it was dark as well—I pushed the door open to see what was going on, and everything is smashed up, everything was everywhere. I was like: “Okay, cool. We’ve been robbed.” I didn’t even go in, because the biggest kitchen knife we had in the drawer—you know in hotels, where you put your card in to turn all the lights on? Instead of a card, it was our kitchen knife. I’m like, “This is fucking scary. I’m going to go straight to reception and tell them.” I went there, and the receptionist came out [to the room]. He does the same as me, doesn’t go in, just has a little look, and [he says], “Wait, I’m going to go get a security guard.” So I went back to reception with him.

When I went back with the security guard—I swear—the knife that was sticking out of the thing was gone! So whoever was in there, was still in there! Now I’m trying to tell the security guard there was a knife in there. He didn’t believe me, so he got a torch and walked in there, and he’s like, “Yeah, you’ve been burgled. I’m going to call the police.”

The police come [in a] black BMW, and two geezers get out the car. They didn’t look like policemen at all; they had gelled hair, and looked like they had come from the nightclub. They had a spare electric key, so they turned the lights on—for the third time, “You’ve been robbed.” The police are looking around, they’ve gone into all the rooms, and then one of them comes over to me and asks me to take my shoe off. I took it off, and he goes over to the door and measures up the footprint on the door! I just thought it was some sort of procedure, so I don’t think anything of it. Then he comes back over and hits me right in the face with the shoe! I’m like, “Listen, this is my apartment—me and my mates—and I’ve been robbed! I called you!”

And he’s like, “No, no, you got the stuff!”—slapping my face. And I’m thinking, “Oh my god, shit’s getting real.” I’m saying, “No, this is my room, I’m Leon Smart.” They’re not having it. They put me in the car and drove me to the fucking police station. On the way there, I was shitting my pants. I didn’t know what was going on. We got to the police station, which is like far away, and they just put me in this room. They got this other policeman to come in, and he’s like, “You English people, you come here, you fuck up our country.” I was now panicking because I was in the police station. I was sitting in this little plastic chair, and this fat dude comes over to me and puts his foot right in between my balls, and he’s squeezing down my balls—movie shit—and he’s going, “You going to tell me where the stuff is, you’ll never see England again!” He said they’re going to rape me and all this stuff in prison. I actually started to cry, cause I’m like fuck—I’m going to get bummed and everything and I haven’t even done anything!

They said, “Do you want any help?” And I said, “Yeah, get me help.” When the lawyer came, he was busting jokes with them in the corridor, and looking at me and laughing, so I thought, “This guy is never gonna help me.” So I said that I did it. They [had] said if I own up to it, they were going to drive me back to my room, then I would show them where I’d hid all the stuff. We get back in the car—I got two policemen in the back with me now, and one in the front. On the way back, the guy is trying to rip my ear off, going “I hate you black people and English people,” and all this shit. I said, “Listen, if you want to beat me up, just get me out the car now and beat me up, and just go away,” like is this going to end? By this time, it’s seven in the morning and my mates are there. [When] we got back, my mates are in the room. These policemen come in and they thought I brought the police to help, but [instead] they slap me up in front of my mates, and they’re like, “find the stuff.” And my mates are like, “No, I don’t know what you’re talking about, this is my room,” and then [the police] just fucked off! They just left! I didn’t even care to say what had been stolen—[I was just thinking,] “Get these fuckers away from me.”

Now I’m sitting there thinking, “Who the fuck robbed the room?” We’d only had girls in the room, and there was one other guy, from Hackney, who had been in our room. And he was working out there, so we thought straight away, “this dude.” Me and my mate—this is like eight in the morning—got on our peds, go winging up to this bar where this dude works. And he was there cleaning the bar, and all the staff said, “No, he’s been here all night, it’s impossible for him to have done it.” By the way, my mate was out of his face, cuz he’d been clubbing all night. We sat down and told the staff what happened, and they’re like, “Have another drink on us.” But we’re like, “Fuck it, we’re just gonna go back to the apartment.”

We got on our peds, we’re on the way back—at Ayia Napa there’s this massive strip, and everyone just parties and hangs out. There’s loads of people just loitering and being drunk. My mate’s fucked, he’s like waving in the road, and he nearly crashes into these girls, but he didn’t—he swerved and fell off the bike. But because I was so close behind him, I rode over his head! It was the most mental thing! I remember blood just going up in the air. This guy comes running over, takes his shirt off, wraps it around [my mate’s] head, and the shirt was just going red—from white to red. They called an ambulance, and we went to hospital and got that sorted out.

That was on the last night of our two weeks. We had to go back to the police station on the day we were leaving to get a letter of consent out of the country, because my passport was stolen. Funny thing—we were so dumb, we had all our phones charging at the same time in the room on the kitchen table, but they only took three of them, and they left one. And they went in my mate’s drawer—they left all his money, they left his digital camera, but they took his disposable camera. They stole my passport, they stole my mate’s glasses—they were about 400 quid—but [mostly] they just stole crap stuff and just fucked up the room basically. And my mate had to pay to get his head sorted out as well!