Zane Reynolds’ records as SFV Acid have painted the picture of a kind of homebody, […] 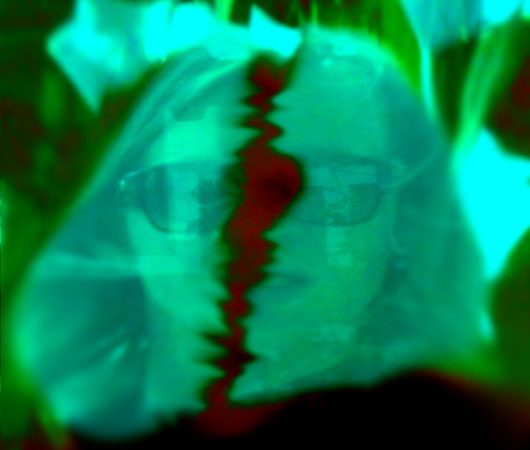 Zane Reynolds’ records as SFV Acid have painted the picture of a kind of homebody, […]

Zane Reynolds’ records as SFV Acid have painted the picture of a kind of homebody, like an Angeleno version of the prototypical Rephlex artist, someone who’s content to spend his days jamming out at home. Reynolds hasn’t released on that legendary label, but his prolific output contains a lot of its signatures, including winding acid lines, warm, bleary melodies, and tumbling drums. The Dwell, his latest LP, was recently released on UNO, and is mostly business as usual, though its amount of variety hints at some growth. The producer seems content to quietly do his thing in the live setting as well. “I’ve never had anything dramatic or funny happen during a show,” he says. “I’ve dealt with people before and after shows, [about] money… those are stories that every artist needs to know—like being promised 80 bucks by a venue, and not ever getting it, and then finally seeing the owner of the venue on the street, and [getting] him to give the money to you there—that’s just the story that I live with every day.” Digging for inspiration can be as vital a part of the artistic process as actually playing the music, however. In this edition of Trainwreck, Reynolds recounts a record hunting expedition gone violently wrong.

My friends are crazy, avid record collectors, and they’re constantly on Craigslist. They were looking for records on Craigslist, and they came upon this listing for record vendors at a bar in North Hollywood. And it said come with your records, trade records, trade records for beer. And so we ended up going, and it was one guy with a table full of records. We knew who he was—he was this guy that works at a record store called Second Spin that’s on Ventura Boulevard, and we were all kind of like, “we already know what this dude has.” We hung out there for a while, and we started drinking. We referred to the ad that said you could trade beer for vinyl, and I had a stack of my own vinyl. We wanted to trade some vinyl for beer, but the bartenders wouldn’t have it, and we were trying to explain it was in the ad. We just kept on drinking more and more throughout the night. My friend started to make the bartender super pissed off because he was kind of getting in their faces about the deal. I was really drunk, I’m not sure what happened in a lot of the moments that we were there, [but] we were just being brash. My friend had opened up this large tab and he didn’t tip the bartender—he wrote some kind of cruel note [instead]. I’m not sure what he wrote, he might have wrote “world peace” on the check. Both the bartenders came back from behind the bar and started yelling at us, and they were trying to kick us out. And as they were kicking us out I was throwing my New West Coast vinyl at them, and I hit one of the bartenders in the face. Once we were outside, some guy came up from behind the bartender and said, “don’t mess with my friend,” and he tackled me. I hit my head on the ground and I kind of freaked out. And then, not knowing who tackled me, I got up and I slapped the bartender in the face. His glasses flew off and I ran away, and then my friends picked me up down the street.