Drawing inspiration from the halcyon days of juice bars, loft parties, and the earliest glimpses […] 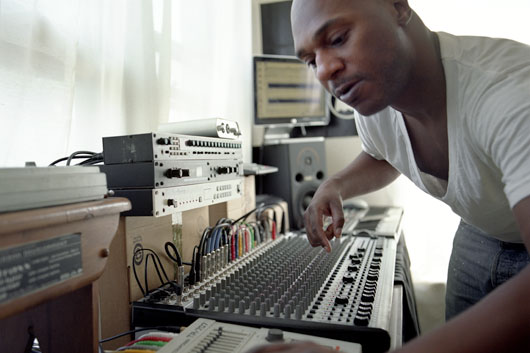 Drawing inspiration from the halcyon days of juice bars, loft parties, and the earliest glimpses […]

Drawing inspiration from the halcyon days of juice bars, loft parties, and the earliest glimpses of the Chicago rave scene, Melvin Oliphant’s skewed vision of the past is a creative force unto itself. Recording under aliases such as Traxx, X2, and Saturn V, Oliphant’s lo-fi production style can, within the space of a single track, flirt with jackhammering industrial noise, brittle string melancholy, and acidic bassline repetition—as if all the disparate sounds of 1988 joined forces. Oliphant calls the sound ‘jakbeat,’ and along with Tadd Mullinix, D’Marc Cantu, Beau Wanzer, and a few other like-minded producers, they’ve carved out a sort of alternate reality for house music. It’s definitely not the glossy sound we’ve come to expect from Chicago, but rather a messy and chaotic space in between. Below, Oliphant tell us how he gets the raw sound with a relatively simple set-up.

XLR8R: Are you using a computer at all while recording?
Melvin Oliphant: Only at the final, final stage… after I’ve recorded to a Denon cassette tape. I just run it from a [Behringer] mixer to the cassette deck to the computer, so you’re getting the tape noise. And I don’t use compression after that—all I do is normalize so I can get the dirtiness to come out.

So everything before the computer is analog?
Yeah. For example, I use one of the first sequencers from the ’80s. It’s called an Alesis MMT-8. I do have some VSTs in my studio, like the [Korg] MS20. But I’ll tell you right now that basically the entire album, Faith, was done with analog gear: Roland synthesizers like the SH-101, a Juno 106, and the TR-707 and 505 drum machines. Or I’ve got a Korg Poly 800 and this German acid synth, the [Acidlab] BassLine. The thing is, I did use that MS20 VST on the track “Violent Epoch,” but you wouldn’t be able to tell! That’s the whole point. I’d rather allow for more of the human part, the old machinery that gave out that certain signal; that certain frequency. So if you listen to “Violent Epoch,” and not the bassline but this weird sound that comes in… that’s the VST. And I really don’t think you can tell.

True, everything around it sounds so raw.?
And that’s a choice that you can make, even if it’s a choice that not everyone seems to realize they have. For me, I just feel better using these machines because I have to work. I have to actually do something. Lift my fingers up and move around and get the exercise. And you know what? A lot of people making the music right now could stand to do the same. Do some work! Step up your game. I don’t want to hear that shit anymore—half these people aren’t doing anything. They’re just talking and bull-jiving. What happened to being diverse? What happened to taking real risks? Because to me, these people—and they know who they are—they’re saying, “I want to make my money by being safe.” If you’re making the music, let me see you actually do it!

?Is there a connection between “doing work,” like physically moving, and taking risks as a producer?
Absolutely.

In that respect, you’re probably one of the most physically active DJs out there.?
Yes, although let me make this point, if I can: I am not a DJ, I’m a disk jock. There’s a big difference there. I am not your request. What a disc jock is supposed to be is a medicine man, a shaman. And I don’t give people what they want; I give them what they need.

Do people need to hear some of the past again?
Well, it’s like… my beat patterns always come from myself, but I do listen to the old tracks and I do try to take those old patterns into a different place. But just so you understand this: It is not copycatting to take those ideas and go somewhere else with them. It comes from this whole jack thing, spelled j-a-c-k. It’s an idea that’s made from the house music concept, but not in a way to rehash what we already know. And the thing is it’s not like I’ve been producing for like 20 years. I started in 2000, and I’ll be completely honest with you—I’m not a pro. But I do know enough to know what I don’t want things to sound like.

Overproduced?
Yes, and you get a thousand claps for that. I’m not sure how to say this, but… I’m taking from inside of the machine, and working from the inside backwards. I don’t know if you know what I mean. But I’m not going by the laws of physical gravity. I’m going by the alternative.

??Traxx’s Faith is out now on Nation.