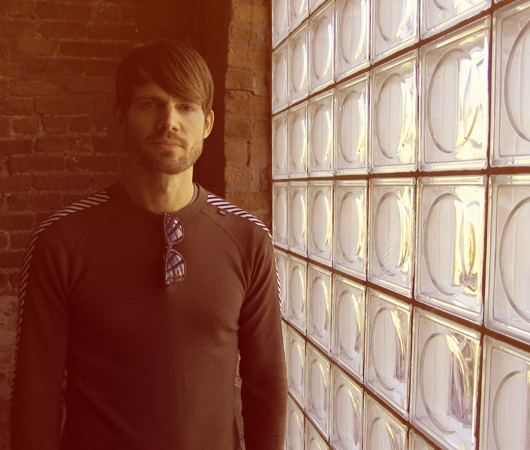 It wouldn’t be the least bit of a stretch to call Scott Hansen a multidisciplinary artist. A masterful graphic designer and a rapidly rising musician and producer, he’s spent much of his life constructing his own unique audio/visual paradise where sepia-soaked skylines, bucolic landscapes, and Endless Summer motifs intersect with Balearic sound worlds, warbling synth flourishes, and inherent vibes of dreamy nostalgia. The combinations sound familiar, sure, but Tycho is no cliché (neither is Hansen’s design firm-cum-blog ISO50, for that matter). As his latest LP for Ghostly, Dive, and the lengthy story behind its creation indicate, Hansen’s work is the culmination of the better part of a decade spent obsessively honing his craft into the vibrant, expansive vision it is today.

“It was very, very gradual,” says Hansen on his ascent into the music world. “I looked at music absolutely as a hobby, just like a side thing, because I didn’t really identify as a musician. [It was more like], ‘I’m a graphic designer, and I’ll mess around with this on the side.’ But it’s something I really had a passion for.” That passion has followed Hansen from his hometown of Fair Oaks, CA, to Sacramento, where he first started Tycho as a solo laptop endeavor, to his current homebase of San Francisco.

Apparently, the incarnation of what Tycho is today was made possible by his decision to live in the iconic City by the Bay. “Moving to San Francisco affected me in a pretty profound way, in a lot of respects,” he explains. “I think it helped me evolve my sound, and think outside of the space I’d been in in Sacramento. The scene there is so insular and kind of feeds on itself, you just end up playing the same shows with the same people for the same people. With San Francisco, I felt this sense of openness, like I could go anywhere with it.”

“Dictaphone’s Lament” from Past is Prologue

Even though Hansen would eventually take his music to a wider audience than ever before, it was some time before that became a reality. The first seeds of his endeavor were planted with an album called Sunrise Projector, which was later picked up and re-released by the now-defunct Merck label, and then again by Ghostly, under the title Past is Prologue. Maybe the producer isn’t 100% content with his initial effort, but it’s certainly not without merit. As he puts it, “I still see [Sunrise Projector/Past is Prologue] as a pure expression of where I was at at the time, and I think that’s what’s really good about it.” Hansen goes on to explain how that ties into his latest record, saying, “Dive is the realization, the full picture of what [Sunrise Projector/Past is Prologue] was supposed to be about. It’s the result of all the years in between those releases. Some of this material—little bits and pieces, starting points of songs—is almost five years old.”

In that sense, Tycho is actually starting over with Dive. Because so much time has elapsed between projects, the music has grown into something else entirely, something fully formed and possibly more inspired than before. Hansen even admits that he views the dense, 10-track LP as his actual debut album. But why exactly did it take five years for these largely instrumental electronic compositions to see the light of day? The producer explains, “My process is really about little bits of inspiration. I just record them really quick on the guitar or something. I have a huge folder full of them. But if I start a song, I finish it. So if I decide to pick up that little bit, I’m going to go all the way with it.” He goes on, saying, “But taking that idea to what I consider to be a finished product is a very, very long, winding road of meticulously going over every detail.”

That arduous road has paid off tremendously for Tycho. Each handcrafted synth timbre, each intricately chopped-up drum pattern, and each bit of live instrumentation is part of a full experience, something that has been painstakingly orchestrated from start to finish. From the propulsive drift of dreamy lead single “Hours,” to the seaside-conjuring atmospheres of “Coastal Brake,” to “Adrift”‘s six minutes of understated melodic anthems and woozy bounce, Dive is an immersive record right down to the psychedelic album artwork.

“Conceptually, I’ve always gravitated towards arrangements that weren’t just presenting one idea,” shares Hansen. “I like to look at my songs as having a main part, an interlude, and almost like another song at the end. I like the idea of giving the listener all of those ideas, instead of focusing on one. It’s more of an experience, like a journey through these different places.” It’s a sound that certainly owes as much to Ulrich Schnauss and Boards of Canada as it does contemporary indie bands like Deerhunter or Fleet Foxes, but was also spawned from Hansen’s early love for drum & bass producers and turntablists like DJ Shadow. Oddly enough, prog rock plays its role in the current Tycho sound, as well. He explains: “This album is pretty informed by stepping outside the boundaries of normal experience, or your daily life, and just trying to get to another kind of space. I try to temper that with an emotional component, which I think the prog artists did, too. I didn’t want to go all the way into that world of, like, ‘Hey, man, when you’re high this sounds really good.’ I try to avoid self-indulgence at all costs.”

But maybe a bit of self-indulgence is just what he needed to make his music the compelling force it is today. Hansen is also solely responsible for his project’s visual aesthetic, including all of Tycho’s album art, live video projections, merchandise, and tour posters. More often than not, the artist interplays his two mediums, and to great effect. “I think they call it ‘synesthesia,'” he says. “I usually take imagery and use it as a guide for the music, and vice versa. They kind of come out of each other, but in the case of the album cover, that was absolutely done after the fact.” He’s referring to the gorgeous image of a multi-hued sun practically melting into a large swath of barren earth that dons the cover of Dive. The artwork is integral to fully understanding Tycho’s transportive new LP, but a question remains: Is it a sunrise or a sunset?

“It’s supposed to be sort of ambiguous,” Hansen shares, “but to me, it’s a sunset. It’s kind of like the epilogue to a chapter in my life as an artist and a person. This last year has been really transformative in a lot of ways, personally, so this album is kind of a punctuation on the end of a really intense period [of my life]. The end of a part of me.”