I don’t remember how I first met Dust La Rock, but I do remember last […] 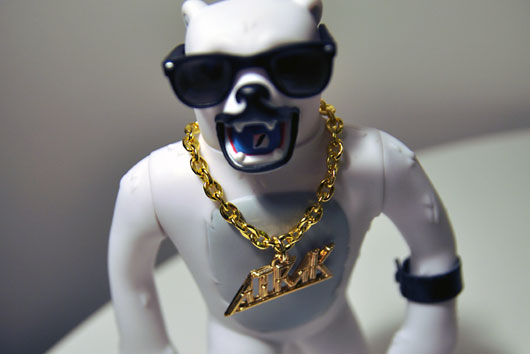 I don’t remember how I first met Dust La Rock, but I do remember last […]

I don’t remember how I first met Dust La Rock, but I do remember last summer. I shared a backyard with a member of his Brooklyn BMX gang and at the end of long sweltering days, I often ended up sharing a beer or three with the quick-witted graphic powerhouse while he attempted to sell me pieces of his techstep drum & bass collection. (I didn’t buy any.)

Dusty (real name: Josh Prince) has an interesting history indeed. Raised in New Jersey, he is a veteran of Christian private school, drug dealing, and ’90s hip-hop—his first job upon moving to NYC was a modeling gig for streetwear giant Ecko Unlimited. Ecko realized the budding talent of this wise-cracking ne’er-do-well, and offered him a job as a graphic designer despite his lack of experience. He passed the trial by fire, and soon Dust’s work could be seen all around town, from designing identities for U.K. drum & bass DJ A-Sides’ Eastside imprint and British street music mag ATM to a series of eye-catching and radically different club flyers for local promoter Roxy Cottontail. Roxy eventually introduced Dust to Nick Catchdubs, and he was soon invited to do all of the art for the now club-storming Fool’s Gold label.

With a myriad of record covers under his belt (from The Orb to Kid Sister), plus crazy items like an absinthe spoon (with high-end NYC jeweler Bijules) and a vinyl polar bear toy (with A-Trak and Kid Robot), this 32-year-old workaholic has certainly come a long way from selling acid and cleaning oil tanks in the suburbs. Over fish and chips at Brooklyn’s Dumont restaurant, Mr. La Rock and I talked about Rosicrucians, Throbbing Gristle, and his extensive collection of vintage Adidas.

?
Where does the name Dust La Rock come from?
My fondness for PCP and a nod to the golden age of hip-hop.

What made you decide to become a graphic designer?
After narrowly escaping a 20-year prison sentence for the solicitation of narcotics, I somehow found myself working in the fashion industry. After a couple years spent learning the ropes, it was a natural progression for me to make the transition from product design to graphic design/illustration. Basically, drawing shit was the only thing I was good at.

What is the worst job you’ve ever had?
I used to work for a contractor at an oil refinery in Jersey. My job was to clean the interior of those giant white circular oil tanks. Some of them had floating roofs, so when they were empty you had to build 12 pillars of 85-pound wooden blocks, stacked six high, so you wouldn’t get crushed if the roof dropped whilst cleaning up crude oil with a three-foot firehose. Nasty job, especially on mushrooms.

Who are your style icons?
Serge Gainsbourg, Jason Schwartzman’s character in The Darjeeling Limited, and Dave 1 from Chromeo.

Do you collect anything besides records?
I collect vintage Adidas, specifically Olympic sweatshirts, jackets, and tracksuits. I used to wear it. Now that I’m becoming a bit more mature, I tend to wear black a lot, but maybe for Halloween I’ll bust some out. My family has always had a lot of weapons and they’ve come down to me. I definitely have a gun or two that was my father’s. It’s documented that my mom’s uncle was the last man standing in a battle on Iwo Jima during WWII. The American soldiers were going through bayoneting the dead and he jumped up and had to prove to them that he was an American soldier. So he had a Japanese officer’s sword, and I have that. I also have random weird fucking knives that my grandfather and father collected, so I always have a knife on me at all times. And books. It’s my job, sort of, so I have a pretty large library.

Where did the title of your recent art show, Best of the Beast (at NYC’s Christopher Henry Gallery), come from?
San Francisco DJ Vin Sol came up with it, actually. He did two parties in S.F. with that name; I did the flyers for them, and one of the flyers was this Gila monster hand [that ended up in my show]. I thought it was just the best name in the world, and some of the content of the show has a devilish aspect. Let’s face it, the devil is more interesting than God… or all the kind of things that go along with the name, the idea, or the connotations.

Tell us a bit about the symbolism of some of the art in the show.
A lot of the symbolism is related to Rosicrucianism [a society of German mystics]. There’s some straight-up Satanic shit—there, I said it; the mini-crest I did that you can see on the bottom of the prints was based off a Nazi mystic society logo. They had this whole division that was devoted to Raiders of the Lost Ark-type shit. They didn’t really go in search of the Ark, but they were out there searching that kind of stuff out.

I think it’s interesting how much dark music, art, and philosophy you’re into as a person and the fact that you work at Fool’s Gold, which I always think of as a really fun, party-time label.
Yes, that is definitely an ongoing struggle in my mind. It tends to make me a Negative Nancy sometimes, but then I think about the kids and how they want to dance. Personally, I’m trying to shy away from the shinier stuff. For my recent art show, I don’t think people were expecting what the content was. If I would have given them Fool’s Gold-type stuff, it would have been cool and maybe a bit more widely accepted, but it wouldn’t have been that fun.

How did making the Grateful Bear with A-Trak and Kid Robot come about?
The bear is originally from Alain’s [A-Trak’s] old website. The bear is just a character that I came up with and he proposed that we turn it into a toy. It took us two years to get it right—you know, tweaking the arm or the leg to certain infinitesimal degrees and being busy with other shit. I remember Dave [from Chromeo, one of the Fool’s Gold owners] called me up and was like, “Duster, is that a hit of acid on the bear’s tongue?” And I was like, “Yeah, is that a problem?” And he said, “No, just wondering.” You know, I always got to add my own twist to it. Grateful Bear’s got a little strut to him, Shakedown Street-style.

?Who are some of your less obvious design references?
There are a couple Japanese artists from the ’60s or ’70s that were the Japanese counterparts to Peter Max or Milton Glaser; putting their own Japanese twist on it and just really turning things out. It was that whole post-WWII era and this explosion of creativity after things being so black and white somehow. Artists like Keiichi Tanaami and Tadanori Yokoo.

What are some of your biggest inspirations of 2009?
Sir Peter Blake, Faith No More reuniting, golden apples, severed fingers, Bruegel the Elder, chenille, twill, chainstitch, Jameson whiskey, and Rosicrucianism.

What is your favorite fashion look?
Vintage U.K. mod.

Who is your favorite hip-hop artist of all time?
Smif-n-Wessun.

What is your favorite item of clothing that you own?
My vintage Pop Will Eat Itself tour shirt.

Your work sometimes gets compared to that of So-Me or Parra. What do you make of that?
To appropriate a quote of Dali’s: “Each morning when I awake, I experience again a supreme pleasure—that of being Dust La Rock.”

Where in the world would you most like to go?
That really big fucking room where all the esoteric secrets of the universe are kept.