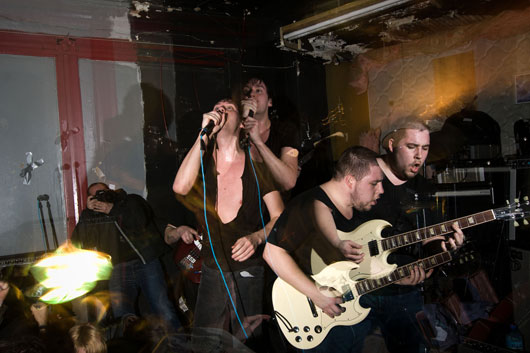 While messy, smarmy post-punk isn’t necessarily the first thing one might associate with Philadelphia, the city’s western underbelly is home to a group of distinctly individual artists making some seriously messed-up jams. But trying to pin down a singular regional noise-punk sound doesn’t come easy. “The sound of a cheesesteak being grilled up at 2 a.m. at Geno’s or Pat’s is pretty identifiable as a Philly sound,” says James J. Vail, a member of FNU Ronnies. “…People incessantly yelling, honking, telling each other off on the streets.”

“Our environment is totally an influence,” explains Pissed Jeans frontman Matt Korvette. “We couldn’t fight it if we tried. It can be a kind of rude place, with lots of well-intentioned people throughout, which can make for an interesting mix.”?

The Philly punk underground plays host to bands united more by a generally bleak outlook than a specific sound. From FNU Ronnies’ bizarro post-hardcore through dreary synth-pop un-romantics Cold Cave, highly offensive, now-defunct instigators Clockcleaner, and the maniacal Pissed Jeans, the city produces some gloriously negative music. (And has for years, with a DIY punk hall of fame that includes early hardcore pioneers YDI, Flag of Democracy, and The Dead Milkmen.)

For Vail, Philadelphia would be best left off the map. “There are more interesting towns or cities in the States that have more of a specific identity that creates a unique sound. Places like Columbus, Ohio put Philly to shame,” he claims. Vail sees Philadelphia’s few decent punk bands as a response to the general void of having one specific scene. “[With] a lack of quality bands comes the need to make better ones,” he explains in his typically negative tone. “Necessity is the mother of invention, which enables a virulent paradigm shift that jettisoned itself away from the status quo. Also, boredom and the huge amount of insanity that permeates like incestuous wildfire throughout the city is quite nurturing.”

Another thing nurturing bands, however, is their opportunity to perform. While many cities struggle to find the space for their avant garde noiseniks, Philly has an abundance. “There are a pretty wide variety of venues to play in this city,” explains Korvette. “No matter how bad your band is, there is a place you can perform for the public, which I suppose is ultimately a good thing.”

In his own way, Vail echoes the idea that the city has developed its own breed of weird punk. “Philly made us what we are,” he comments. “If we came from another city we’d sound exactly like the Vivian Girls and be more concerned with our image, as opposed to doing something new and productive.”