XLR8R in Conversation with Pantha du Prince at MUTEK 2013 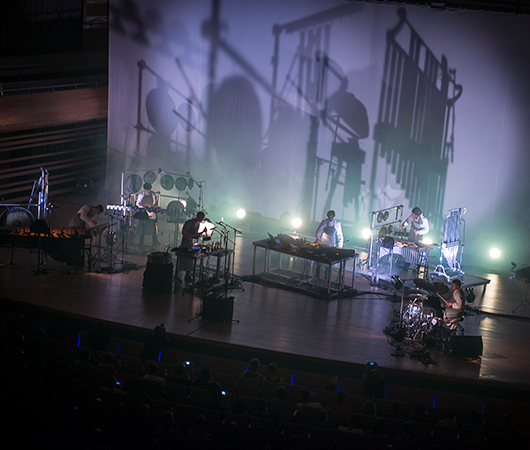 XLR8R in Conversation with Pantha du Prince at MUTEK 2013

The annual MUTEK festival took place last week in Montreal. XLR8R was lucky enough to snag an invite, and in all honesty, we had an amazing time. Our review detailed many of the MUTEK highlights, but it bears repeating that the set from Pantha du Prince & The Bell Laboratory on Sunday evening was undoubtedly the week’s standout performance. The day before that, the festival and Red Bull Music Academy put on a public Q&A session with Pantha du Prince, and enlisted our editor Shawn Reynaldo to play host. A portion of the discussion has been excerpted below, during which the veteran German producer shares some of his thoughts on DJ culture, techno, and how the club factors into his creative process. We’ve also included a few extra photos of the Pantha du Prince & The Bell Laboratory performance, as it was a truly phenomenal show.

XLR8R: At this point, when you’re making music, how much does “the club” factor in? Do you even think about whether things will work in a club context?

Pantha du Prince: When I play [live], it’s always my band. The club is my band. You’re sitting in the studio and it’s like, “Yeah, this room would be like this” or “This room would react like this.” It’s like this hypothetical room that you create within your music; you create the room that the music takes place in, so it’s already in the music. I mean, it should be, for club music at least.

But there are also these crazy rooms where you can implement a church. For example, this room. You can make it sound like a church. It’s like a virtual room. So the club setting itself, for me… I relate it to a certain form of narration. Pantha du Prince is basically something that refers to club narration, to dance music, to techno music, to house music from other times. It’s ritualistic, it’s letting go, it’s physical, it’s body music—and mind music, most ideally.

For this project, it’s having this in your mind as a backdrop, and still being able to move forward without having the regularity or the classic set-up for a club. I still have the reverb of the club in the music, as a narration, as a progression of connection of physicality, mind, and soul. It’s this kind of uniqueness and unity that just comes with the music. As soon as I sit down as Pantha du Prince, if I turn into Pantha, he’s this weird figure that has to create dance music.

So when you’re making music, do you ever think about whether it’s something DJs would play?

You know, what I like about DJ culture is that it’s also a matter of narration and how you basically transform time. You play three hours and make a moment for everyone. Pantha du Prince would not be able to exist without DJ culture, of course. Everything comes back to the experiences that I had in the club, that I had while DJing myself; I don’t do it that much anymore, but still, it’s a certain way of organizing people, a room, and the music to each other. This is DJ culture, the way you assemble things, and in this sense, it’s highly important, even though I think it should develop. It needs to transform, in a way.

I think it was a great liberation when the DJ appeared as a figure. It’s still very liberating, this idea of four hours of music—that already exists—that is newly assembled, twisted, and tweaked. [It allows] every type of music [to be placed] under a new perspective, and the perspective of this audience that has a pleasurable time dancing and losing themselves in the music with other people. They go to this place together, they create this awareness for the sound, and the sound takes them there. This is related to DJ culture. It’s something that when I do these solo sets as Pantha du Prince, it’s taking this form, but of course, [I’m] filling it up with content and other people’s productions. So it’s Pantha du Prince productions, [only] set and seen under the DJ’s settings.

Would you like to DJ more often than you are now? Do you miss it?

I don’t miss it, but… as a DJ, you need to listen to new music and you need to digest the music that other people create. And you need a certain fascination and time to do this. I recognize that I’m better at making music than digesting music. I love to listen to a lot of new things, but it’s also good for me to not have to do that. Really, it’s a decision I made for Pantha du Prince. I have a lot of records, I DJed for a long time, I’m still buying records, I’m still taking part in the charts of DJs and [following] new developments, but it’s another spirit. For now, it feels right to play live. Maybe I will turn back to DJing in the near future. Who knows?

Who are some of your favorite DJs, either now or that influenced you in the past?

[Exhales] … Too many. Of course, when I saw Moodymann for the first time in London. When I was really young, 16 or 17, I listened to this hard techno music and I loved it. I really admire still this DJ in this indie club that played the most amazing dance tunes sometimes in the small town where I am from. Next to this indie club, there was the techno club, and there were these DJs coming in. Of course, all the traditional Detroit [artists]. I listened to Minimal Nation by Robert Hood, and then to see him DJ, or seeing people like DJ Rolando, all playing things that you will never forget. It’s like you’re really out of time, in this other place. This is also what I enjoy about people like Jeff Mills.

Also, when I see my friends DJ, it’s the most amazing thing to see my friend Lawrence. [He’s] the most influential guy for Pantha du Prince, this guy who runs Dial Records with David Lieske (a.k.a. Carsten Jorst). This guy for me is [the best]. And my friend Efdemin, it’s unbelievable what these guys are telling, what stories they’re bringing.

You’ve been quoted as saying that for you, techno is no longer a genre, but more of an infrastructure at this point.

This is more of an observation. That doesn’t mean it’s this way for me. It’s more of an observation of the scene. It provided an infrastructure. The club system in itself is an infrastructure that we have to be aware of. It’s a commercial system as well in the underground scene. We have clubs that have a 200 or 300 capacity, but it’s still an infrastructure that was created through a system of DJs, live acts, booking agencies, and people who wanted to work together to celebrate this music. After many years, it’s a set-up, an environment, an infrastructure. It grew out of the techno and house movement. The idea of two speakers, one guy, and playing records—it’s the most simple set-up you need to have a musical celebration. And the set-up developed, it was also taken by pop musicians as a concept—the idea of this room; it’s [for] dance and it’s so simple. You don’t need a bass-drum mic. You don’t need a technician to organize 20 channels. You just put a record on and here we go. This idea of being able to do it late at night because you don’t need a soundcheck, you just arrive and set up and you go. It’s a system that now is being used by lots of other musical genres and histories. This is what I meant. It’s a set-up that was created through this music but now is being used by other content as well.

So you still think that “techno” music exists and is interesting?