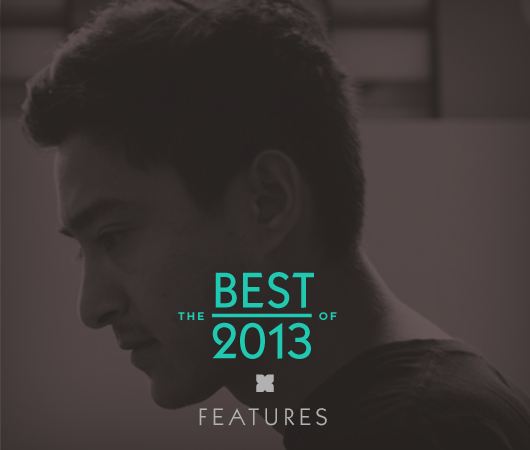 Last week, XLR8R kicked off its Best of 2013 content by offering up a list of the year’s most popular tunes from our Downloads section. Without question, the free downloads are some of the most easily digestible content on the site—which undoubtedly helps to explain why readers like them so much—but their popularity doesn’t mean that we’ve lost our love for meatier articles. After all, XLR8R began as a print publication, and our drive to dig deeper, ask questions, and put together thorough, detailed articles hasn’t been lost. Each week, XLR8R publishes at least two or three long-form features, and now that the end of the year is right around the corner, we’ve looked back and selected what we think are the 10 best of the bunch. On top of that, we’ve also checked our database and calculated which 10 features were the most popular with our readers.

10. Trainwreck: Juan Maclean
Our Trainwreck series allows artists to share harrowing stories from the road, and this installment found DFA mainstay Juan Maclean detailing the time he actually got into a fight with a member of the audience—in the middle of a show.

9. The Many Faces of Mark Pritchard
The veteran UK producer has been something of a shapeshifter over the years, so we asked him to break down his many aliases and collaborative projects from the last two decades.

7. ENTER. the Void: Richie Hawtin and Ibiza
Over the summer, XLR8R went to Ibiza and spoke with one of techno’s leading statesmen about his history with the island and the thought processes behind his ENTER. party.

6. Wax Ecstatic: Kyle Hall, Gerd Janson, Hieroglyphic Being, and More Discuss the Limited Vinyl Craze
With vinyl sales (and vinyl-only imprints) surging in 2013, we reached out to a variety of label owners and sampled their opinions about the trend and what’s driving their own choices when it comes to pressing—and selling—records.

5. In the Studio: Shigeto
It was hard to choose just one In the Studio feature for this list, but our visit to Shigeto’s Detroit production lair was ultimately our favorite. Not only was he incredibly informative, but the gorgeous photos of his expansive studio space made everyone jealous.

4. Artist Tips – Objekt Offers Five Ways to Preserve Your Sanity and Make Your Tracks Sound Better in the Process
Although this incredibly detailed collection of production advice from Berlin techno auteur Objekt was only published a few weeks ago, it was immediately apparent that it was once of the best—and most useful—articles to appear on XLR8R this year.

3. Record Store Week: A-1 Records
Back in April, we launched Record Store Week, a feature series devoted to a few of the best record shops from around the globe. Again, it was hard to pick a favorite, but this in-depth look at New York’s A-1 Records truly captured the store’s magic.

2. Rapper Proof – How Hardworking LA Beatmaker Knxwledge Became the Most Known Unknown Producer in the Game
One of our most colorful artist profiles this year, this article found XLR8R speaking at length with hyper-prolific LA producer Knxwledge, who infamously claimed to have made “half a million” beats over the course of his career.

1. Bubblin’ Up: Young Echo, Kahn, Vessel, Kowton, Artifact, Hodge, and the Rest of Bristol’s New Generation
Back in January, we kicked off Bubblin’ Up Week—a series devoted to the artists and sounds that we thought were poised to break through in 2013—with an in-depth look at the latest wave of producers to come out of Bristol, one of the UK’s richest and most unique musical cities.