Up to this point, the entirety of our Best of 2013 content has been focused […] 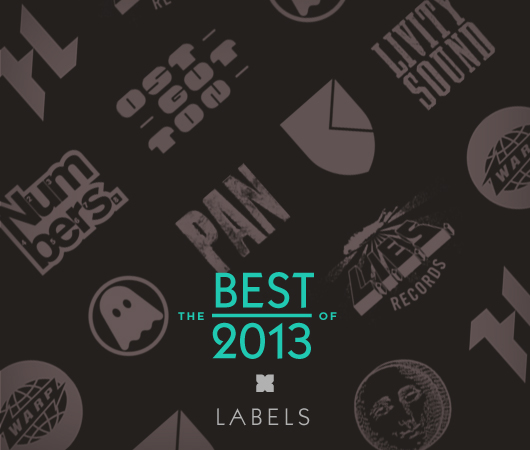 Up to this point, the entirety of our Best of 2013 content has been focused […]

Up to this point, the entirety of our Best of 2013 content has been focused on material that has popped up here on XLR8R throughout the year. However, starting today, we’re turning our attention outward, specifically toward the new music that surfaced during 2013. Of course, much of that music was delivered by record labels, which continue to occupy an important position in the music world. While the internet has undoubtedly reduced their relative power and bridged much of the gap between artists and their fans, record labels—at least the good ones—act as curators, and help deliver music according to a particular perspective. Of course, those perspectives will often vary wildly from one imprint to the next, but that’s undeniably part of what makes following labels so much fun. In truth, 2013 didn’t really have one dominant label, or even a dominant sound, and as a result, the entries on this list don’t necessarily have all that much in common, apart from a devotion to steadily releasing excellent music. (Keen-eyed readers will also recognize many of our picks from October’s Labels We Love series.) That being said, during an era when people often complain about being overwhelmed by the sheer quantity of music out there, celebrating labels whose activities are focused on quality seems like the right thing to do.

10. Warp
Launched in Sheffield, UK in 1989 and quickly becoming a key player within the nascent global electronic-music zeitgeist, Warp has remained true to its mission and provided a home for quirky sound pioneers for nearly 25 years. After a somewhat down year (by its own high standards) in 2012, the label got back on track and issued a series of top-notch releases in 2013, including new music from Mount Kimbie, Oneohtrix Point Never, Darkstar, Autechre, Mark Pritchard, and the long-awaited return of Boards of Canada. Amidst its busy schedule, Warp also found the time to present a double-vinyl reissue of LFO’s 1991 classic, Frequencies, and put together Feast/Beast, a double CD collection of remixes by and for label mainstay Clark. Walter Wasacz

9. Mister Saturday Night
When New York party Mister Saturday Night launched its label arm in 2012, its sound was quickly defined by the success of Anthony Naples’ Mad Disrespect, the disco- and house-indebted debut outing from both the imprint and the young Brooklyn producer. That snap judgement, however, proved wrong, as the label’s second year has been defined by a willingness to explore a surprising breadth of sounds, with hard-edged techno and house (Lumigraph’s Yacht Cruiser, Hank Jackson’s Deposit, and Naples’ follow-up, “Moscato”) sharing the roster with more experimental fare from Archie Pelago and softer offerings in the vein of Alex Burkat’s beautifully orchestral Shower Scene. Through these eclectic choices, Mister Saturday Night has managed to replicate its party’s famously inclusive spirit on wax. Derek Opperman

8. Livity Sound
As its recent, eponymous compilation album is testament to, Livity Sound is much more than just a label. On top of acting as a platform for releasing solo and collaborative cuts from its three founders—Peverelist, Kowton, and Asusu—Livity Sound has also come to embody a shared vision of club music, one built around rough-edged minimalism and hardware-driven energy. With the launch of sub-label Dnuos Ytivil last year, the collective expanded that vision beyond its three core members to encompass the work of like-minded producers. In 2013, that expansion has led to impressive 12″s from Alex Coulton and newcomer Batu sitting alongside tracks like Asusu’s wonderfully funky “Velez” and Pev’s stunning “Aztec Chant,” all of which have helped cement Livity Sound’s reputation as a hub for some of the most vital dance music around. Si Truss

7. PAN
Despite being in operation for some five years now, 2013 feels like the year that Berlin-based PAN has really come into its own. Under Bill Kouligas’ watchful eye, it’s grown into a wonderfully broad and varied operation over the past 12 months, offering up the gritty techno of Black Sites and Concrete Fence, the low-budget house of Heatsick’s latest LP, the noise experiments of Rashad Becker’s debut, the dark ambience of Helm, and more. But while PAN releases might be stylistically broad from a musical standpoint, they’re drawn together by a shared sense of conceptual adventurousness; each release feels like it has a genuinely valid point to make. Si Truss

6. Ostgut Ton
It’s been almost a decade since Berghain was first opened, yet the infamous Berlin nightclub is still at the top of its game. Ostgut Ton, its in-house label, has done much to disspell the myth of the “Berghain techno” sound, especially with its 2013 catalog, which highlighted diverse efforts like Panorama Bar 05, Steffi’s excellent and deep installment in the series; Fokus, Marcel Fengler’s ambient-leaning debut LP ; and Unknown Origin, Luke Slater’s playful LP under his L.B. Dub Corp guise (not to mention Turner’s House, his ’80s Chicago-indebted EP that preceded it). Add in a slew of EPs and a couple of harder-edged techno LP releases by the likes of Marcel Dettmann and Function, and it’s safe to say that the German imprint had another really good year. Derek Opperman

5. RVNG Intl.
RVNG Intl. has come a long way since its early days as a repository for obscure mixes and compilations, but label head Matt Werth’s attention to detail hasn’t waned a bit. This year saw the release of a new entry in the always-noteworthy FRKWYS series with David Van Tieghem x Ten’s Fits & Starts, which collects composer/Love Of Life Orchestra member/Laurie Anderson collaborator David Van Tieghem’s music with 10 younger artists. There were also a number of notable full-lengths, including Blondes’ Swisher, Stellar Om Source’s Joy One Mile, and Maxmillion Dunbar’s House of Woo (not to mention his subsequent Woo Daps mixtape). Looking at those releases on paper, it’s hard to draw a through-line between them, apart from Werth’s eye for quality. In that respect, however, RVNG has rarely misstepped, and continues to carve out a place for itself as a fertile home for experimental musicians both past and present. Nathan Reese

4. L.I.E.S.
While the international profile of Ron Morelli’s L.I.E.S. imprint has grown significantly throughout 2013, the label’s approach hasn’t changed all that much. Much like 2012, the past 12 months have seen the label churn out release after release of raw, vibrant dance music at a pace that’s difficult to keep up with. It’s this speed of operation that makes L.I.E.S. so appealing though; to follow the label feels like living in the moment. There’s no time for releases to be over-thought—each 12″ feels fresh and urgent, as if it’s been delivered direct from the producer to the listener without any sort of dilution in between. Meanwhile, listening to the label’s latest discoveries—Greg Beato, Florian Kupfer, and Torn Hawk in particular stuck out in 2013—feels like tapping into undiscovered talent at its point of origin. Si Truss

3. Numbers
2013 found Numbers celebrating its tenth year by quietly putting together another exceptional run. With an ethos that valued quality over quantity, the Glasgow label didn’t exactly put up the most prolific—ahem—numbers this year, but when new material did arrive, it was consistently worth taking notice. A brief effort from Rustie and an unexpected offering from Redinho made for strong releases, but it was really just a trio of records that set the Numbers camp apart from the pack in 2013. First was Deadboy’s stellar Blaquewerk EP, a four-track endeavor which brought the London producer out of hiding with a retooled style that seemed to perfectly sum up what the Numbers sound has come to represent: bass-boosted club music laced with distinct streaks of glossy pop and R&B-fueled garage. Deadboy’s feat for the label was later joined by Sophie’s jaw-dropping “Bipp” and Doc Daneeka’s instantly hooking “Walk On In.” The two records stretched club music in opposite directions—Sophie’s single flipped UK bass completely on its head, while Daneeka’s soul-drenched cut hit a dancefloor sweet spot that most producers spend a lifetime trying to find—and in turn, both proved to be some of the year’s most unforgettable tunes. After 10 years, Numbers appears to have come to the conclusion that when a label puts out records of this quality, it doesn’t need to release a million of them. Glenn Jackson

2. Ghostly International
A Michigan-born imprint that set its sights on world domination shortly after its liftoff in 1999, Ghostly International—and its Spectral Sound imprint—unsurprisingly had another strong year in 2013. The core of the company has long centered around artists (including Tadd Mullinix, Matthew Dear, and Osborne) that honed their skills along the Detroit-Ann Arbor creative corridor. This year was no exception, as Ghostly offered up powerful releases by locals Shigeto, Mullinix (as James T. Cotton), and electro-punk legends Adult. However, the results were just as solid when Ghostly went further afield, whether it was dropping full-lengths from Germany’s Recondite, London’s Gold Panda, and Seattle’s Lusine, championing up-and-coming UK producers Dauwd and Fort Romeau, or showcasing the ambient new wave of German producer Markus Guentner via its Moodgadget subdivision. Walter Wasacz

1. Houndstooth
First surfacing in late 2012 with the backing of London’s storied Fabric nightclub and Electronic Explorations’ Rob Booth at the helm, it’s fair to say that Houndstooth faced some daunting expectations in its first year. However, if the young label’s brain trust was feeling the pressure, it certainly didn’t affect the quality of the music on offer. Its first salvo, Call Super’s The Present Tense EP, was a strong one, though the inventive techno explorations of his follow-up, Black Octagons, were even better. Not every release was a winner, but there’s little question that Houndstooth picked up substantial momentum as 2013 wore on, and two of its late entries, Soul Music, Paul Woolford’s jungle- and hardcore-indebted full-length as Special Request, and Akkord’s self-titled LP, are undoubtedly among the year’s best albums. At this juncture, it’s still a bit early to say exactly what Houndstooth’s sound is, but the connective thread is dark, driving, and unmistakably British. Our interest has certainly been piqued. Shawn Reynaldo