We’ve officially passed the halfway point of December, and while the end of the year […] 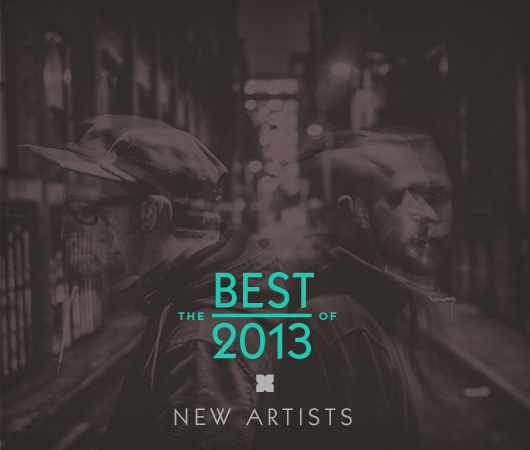 We’ve officially passed the halfway point of December, and while the end of the year […]

We’ve officially passed the halfway point of December, and while the end of the year is right around the corner, there is still time for us here at XLR8R to sneak in the final few installments of our Best of 2013 coverage. Today, the focus shifts to artists, specifically the new artists who came to prominence during the past year. Granted, XLR8R devotes a large portion of its coverage to new and emerging artists every day, but there were a select few whose output was especially intriguing. Some of these artists consistently impressed us throughout the year and gradually boosted their profiles, while others simply did one or two things that were so good that they couldn’t possibly be ignored. Either way, these 10 producers represent the cream of 2013’s crop, and will surely continue to hold our attention in 2014 and beyond.

10. Helena Hauff
Hamburg’s Golden Pudel club has more than its fair share of outspoken admirers, but it wasn’t until 2013 that the multifarious talents of resident DJ Helena Hauff became equally acclaimed. Hauff says that she hadn’t even purchased a record before 2009, but her mix of sleazy electro, polyrhythmic acid, and bleak industrial soundscapes suggests a lifetime of crate-digging, as she’s become a DJ who appears exceedingly comfortable and confident in her craft. Despite having only two releases in 2013—Actio Reactio on Actress’ Werkdiscs and the collaborative Prototype EP with F#X as Black Sites on Berlin polyglot label PAN—both were standouts, even in a scene that’s currently saturated with noisy analog techno. Sonically imperfect but impeccably arranged, the EPs have the grit and palette of decades-old techno, but also emit the kind of kinetic energy that makes for timeless dancefloor bangers. Grotty and with more than a hint of menace, Hauff’s music has all the unpredictability of an invasive oil spill, but it offers up the kind of intrigue that could make anyone want to dive freely into the murk. Aaron Gonsher

9. The Cyclist
With just one LP, an unexpected (and somewhat underappreciated) remix of George FitzGerald’s “I Can Tell (By The Way You Move)” single, and a few other odds and ends to his name this year, Andrew Morrison (a.k.a. The Cyclist) nonetheless left a lasting impression in 2013. The Liverpool-based pharmacology student’s Bones in Motion LP was the first proper artist album to stem from the partnership of Matthewdavid’s Leaving imprint and West Coast hip-hop staple Stones Throw, but the record actually made little effort to fall in line with either of the respected labels’ sounds. Instead, Morrison’s proper debut full-length provided a refreshing slant on hiss-laden house and techno, one less concerned with dancefloor prowess than romanticizing the blown-out sounds of his youth, much of which was spent listening to pirate-radio sets recorded on cassette tapes. The resulting 15-track album offered a densely immersive listen, as it completely reshaped and buried both the brighter and more murky ends of club music underneath sheets of broken fuzz and hazy, tape-processed textures. Though he’s not particularly prolific or, for that matter, high-profile—likely the result of being a full-time college student—Morrison still provided a vital new musical perspective with Bones in Motion, signalling that the Irish-born producer has plenty of room to grow in the years to come. Glenn Jackson

8. Gardland
The two Australian producers of Gardland, Alex Murray and Mark Smith, seemed to come out of nowhere back in August, when standout Brooklyn label RVNG announced that it would be releasing the pair’s intriguing debut LP, Syndrome Syndrome. That record’s press materials definitely played up the fact that the esoteric outfit had written its tracks while in and around the desolate, sun-bleached environs of the Outback, but even if the claim wasn’t entirely factual, a sense of global disconnection and psychedelic wanderings nonetheless permeated Gardland’s music. Coupled with a raw aesthetic and hardware-specific productions, Syndrome Syndrome‘s brand of headstrong, solipsistic techno was bewitching to the say the least, and proved to make for one of the most well-conceived and satisfyingly unrefined albums released by a new artist this year. Murray and Smith may have only just emerged from obscurity about four months ago, but whenever we return to the arid landscapes of their debut LP, it feels like continuing a vision quest we’ve been on for years. Patric Fallon

7. Laszlo Dancehall
The first EP from Laszlo Dancehall—a collaboration between Leon Vynehall and A1 Bassline—Gave Up, was immediately striking for its unique take on a very of-the-moment brand of UK house. Whereas many proponents of this garage-influenced sound seem to fall back on obvious, big-room gestures, Laszlo Dancehall is subtle in its approach—beats are scuffed, textured, and have more of a shuffle than a swing, while driving organ chords give its tracks a jazzy flourish. Second EP LZD II suggests that the pair is only improving, as it touches on moody, deconstructed house variants and features the duo’s clearest nod yet towards peak-time piano house with “Fatty Que.” Tim Gentles

6. Marquis Hawkes
Beyond his music, and the fact that his only releases have all come via Glaswegian imprint Dixon Avenue Basement Jams, little is known of producer Marquis Hawkes. The sounds on his three EPs are heavily indebted to the ghetto-house aesthetic of Chicago, with roughly cut samples and jacking rhythms that pay homage without waxing nostalgic. This year, he tempered his more uptempo side a bit, particularly with the excellent deeper sounds of Higher Forces at Work, whose Moodymann-reminiscent sampledelia on “I Want You” was particularly memorable. We may not know who he is exactly, but all we need to know is that Marquis Hawkes makes excellent music that’s perfect for talcum-coated dancefloors in sweaty basements. Derek Opperman

5. Jessy Lanza
Hamilton, Ontario native Jessy Lanza continues Hyperdub’s ongoing engagement with distinctive, talented, and often uncompromising female producers. That being said, the sheer R&B-infused sweetness of her debut LP, Pull My Hair Back, is nonetheless quite a departure from the brittle electro of Ikonika or the bass-science-infused output of Cooly G. Having the production assistance of Jeremy Greenspan certainly hasn’t hurt her cause, and the album features the kinds of smooth lines and crisp drum sounds that have colored many a Junior Boys record. And while Pull My Hair Back‘s production is by no means simply a backdrop, Lanza’s stunningly beautiful voice—not to mention her indirect, allusive lyricism—is impossible to overlook. Tim Gentles

4. MGUN
Though not as active as it once was, there’s still a lot of creativity in the Detroit techno scene. Case in point is the music of MGUN, the lo-fi alter-ego of Motor City native Manuel Gonzales. His sound is as raw as it is futuristic, with a crunchy breakbeats and glassy chords inspired by his longtime fascination with formative techno label/collective Underground Resistance. (He’s actually toured as a DJ with UR’s live band.) Gonzales has only been producing as MGUN since 2012, but in that short span, his releases—like the Robert Hood-style minimal techno homage of “Blunt Run” (one of our favorite tracks of the year) and his ’80s-electro-influenced If You’re Reading This EP—have positioned him as one of Detroit’s most interesting new voices. Derek Opperman

3. Akkord
Sacred geometry, complex polyrhythms, and clean sound design all collide in the work of UK outfit Akkord. Consisting of longtime Mancunian dubstep producers Synkro and Indigo, the project has spawned a novel sound by combining the obsessively honed production aesthetic of contemporary techno with the abstract rhythms and dread-inducing atmospheres of dubstep. What emerges is something that, though clearly indebted to the past, feels genuinely futuristic in its approach. It’s extremely percussive, with atypical time signatures and unexpected sounds lending the duo’s music a fresh dimension that’s worth hearing. The duo’s self-titled debut LP, which closed out the Houndstooth label’s excellent first year, is an ideal place to start. Derek Opperman

2. Sophie
Next to nothing is actually known about the enigmatic figure behind the Sophie moniker. According to his website, he resides in London; Sophie’s debut 12″ was quietly released in February of this year via Huntleys & Palmers; and the producer’s most recent single, “Bipp” b/w “Elle,” is one of the best records that the consistently on-point Numbers label has ever put its name on. We also know that Sophie has so far only released four original productions—but, damn, what glitteringly immaculate and unabashedly ebullient tunes they are. Sure, the music world at large didn’t exactly take notice until the playful deconstructions of “Bipp” (XLR8R‘s official pick for tune of the year) arrived over the summer, but Sophie’s earlier work nonetheless features the same pristine sound design, halogen-bright synth lines, and gooey pop sensibilities that make his breakout single so undeniable.

But what largely sets this faceless/nameless UK artist apart from most of the other fresh talent on our list is the importance Sophie’s music emphatically places on being just straight-up fun. It isn’t exactly something we’ve come to expect from someone operating anonymously—Sophie’s sound has more in common with the likes of Rustie or even Basement Jaxx than, say, Burial—and that vibrant attitude is equally as infectious as the music’s bubbly hooks and mind-bending sound palette. With an already surprising first year behind him, Sophie’s future only seems destined to brighten. Patric Fallon

1. Graze
Adam Marshall‘s and Christian “XI” Andersen’s collaborative Graze project kind of blindsided us when it appeared in the spring of this year, but it hardly took a second thought for us to heartily cosign the burgeoning duo—we featured the producers in our Bubblin’ Up series, named the remarkably confident Graze EP an XLR8R Pick, and more or less documented the duo’s every move. Obviously, we were eager to champion a brand-new group working on its own hybrid form of techno, garage, and bass music, but it was never because there was anything particularly flashy or unusual about the tracks Marshall and Andersen produced together. Each of the six tunes which filled out their debut record was crafted from a streamlined arsenal of bespoke drum samples and calibrated synth patches, with efficient arrangements that pushed an elegantly simplistic style of dance music. Graze’s sound wasn’t exactly unprecedented, yet the duo managed to chisel itself into something that was a touch more focused and modular than its peers.

Following the Graze EP, Marshall and Andersen immediately went to work on their live performance—a recording of which we were lucky enough to exclusively premiere—and follow-up LP, Edges. The album didn’t quite live up to the expectations set by Graze’s inaugural release, but we still found it to be “sophisticated” and “uniquely robust.” Perhaps more importantly, however, it proved that the duo has quite an impressive work ethic, one with a fair amount of consistency and quality control. Essentially, we’ve been enamored with Graze and its workmanlike approach to music production—both in practice and style—for over half of 2013, and considering the way the pair’s track record has shaped up so far, 2014 could very well see Graze continue to flourish. Patric Fallon

XLR8R’s Best of 2013 coverage will continue through the end of this week, so check back each day for additional year-end round-ups. In the meantime, don’t forget to take a look at the other Best of 2013 pieces we’ve posted already: