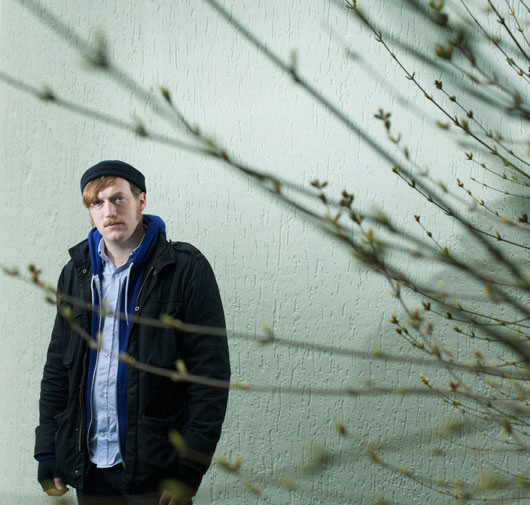 The Field’s Axel Willner faced the pressures of following up a breakthrough album by making another great one.

Axel Willner and I are talking about movies—horror movies, to be exact—over Skype. He’s in Stockholm, Sweden and I’m in Brooklyn. The soft-spoken producer behind The Field’s chopped-up, ambient-leaning techno, I’m learning, is quite the zombie-flick buff. He’s got a thing for George A. Romero (Dawn of the Dead, Night of the Living Dead) and has spent recent downtime revisiting the work of John Carpenter. He lets me in on some obscure gems to check out, tells me which actors and directors to avoid. He clearly knows his shit. Then he surprises me. “But I’m a sucker for rom-coms, too,” he says.

?“Rom-coms. Romantic comedies!” Willner politely exclaims in his heavy Swedish accent. “Like the Farrelly Brothers. I like a good comedy where you can really laugh. And if it has a romantic touch to it, that’s even better.” I wasn’t expecting that at all, but the more we talk, the more it makes sense. Willner’s a man of intriguing contradictions (a hardcore kid gone techno, a slasher-movie fan with a soft-spot for the romantic) and also just a really nice, down-to-earth dude. The kind of guy you want to hang out with. Somehow I totally get how he’d dig Knocked Up.

?Willner came up as a punk in Stockholm, back when the boundaries between rock and electronic music weren’t quite so blurred as they are today. Early on, he had an innate fascination with techno. “When you were a 13-year-old teenager and you were punk, you weren’t really allowed to listen to that stuff. Even though I always found it very interesting,” he explains. His appreciation of early Warp singles eventually led to a lifelong love affair with the buoyant bliss-outs of Wolfgang Voigt’s renowned Gas LPs, and after several years honing his own sound (which is, in many ways, informed by Gas) he quietly submitted a demo to Kompakt, the label Voigt co-founded.

?Folks at the venerated minimal-techno imprint heard something in that tape and didn’t hesitate to scoop him up. In 2007, while spending his days working in a liquor shop in Stockholm, Willner released From Here We Go Sublime, a record that found international acclaim for its fresh re-imagining of Kompakt’s previously perfected but then-inert (some might even say stale) sound. Tracks such as “A Paw in My Face” and “The Little Heart Beats So Fast”—with their looped and spliced rhythms set to dreamy, atmospheric backdrops—helped to further smear the distinction between headphone and club music. You could say he breathed new life into Kompakt. At the very least, he had become its breakout star.

“The Little Heart Beats So Fast”

?Fast-forward to 2009, and life’s different for Willner. For one, he doesn’t have to sell booze to cover his rent anymore. “It’s been quite a big change. I decided to quit my daytime job and I’m just making music full-time now,” he tells me. “And I moved from Stockholm to Berlin. The actual fact of just playing live a lot and making music often is the biggest change, really.” He spent the better chunk of the past two years touring the world with From Here We Go Sublime, playing alongside acts such as Battles and LCD Soundsystem, and slowly perfecting his live act. During that time, The Field’s stage show underwent a structural transformation; instead of just rocking a laptop, Willner began incorporating live players into the mix. “Live drums, live bass, keyboards. No computer anymore except for samplers,” he explains.

?After his tour schedule wound down at the end of 2008, Willner started to think about the follow-up to From Here We Go Sublime, and was inspired by the looseness he found while performing. With a few of his bandmates, he decamped to Adelsö, a remote island outside of Stockholm to lay down the tracks that would become Yesterday and Today, his 2009 record for Kompakt/Anti-. “We went out to a deserted old school on this small island,” he says. “We stayed there for a week and just recorded all day and night.” The resulting album, while unmistakably The Field, is marked by a shift towards warmer, more organic textures and longer tracks that showcase a newfound knack for deep grooves and spectacular climactic builds.

?“It’s the same, but, in a way, different,” says Willner of Yesterday and Today. “Even though The Field is very much loop-based music, we moved away from the laptop as much as we could.” He used some of the same instruments (a Finnish tracking program called Buzz is still his go-to software) but was able to draw more from them.

?Yesterday and Today does reveal a wider exploration of musical styles. “Everybody’s Got to Learn Sometime,” which climbs for several minutes before unfurling into heavy, interlocking grooves, bears resemblance to the repetitive structures of ’70s Krautrock acts Neu! and Cluster. “Leave It” runs the glitchiness of From Here We Go Sublime through a disco filter, its bouncy propulsion recalling the extended jams of Larry Levan. There’s an emphasis here on potency: fewer songs but longer, funkier ones. Willner says that wasn’t intentional. “It just turned out that way,” he claims. “Partly because of the live jamming. And I’ve always liked longer tracks. I like records where one side is one whole track.

?“I wanted it to have a new depth with the live musicians,” he says. Indeed, part of the record’s appeal is a naturalness that wasn’t present on prior Field records. He credits the laid-back recording process and the use of low-tech gear. “It was very easygoing and not super-structured. Very loose,” says Willner. “Also, I got back to actual hardware; started collecting more analog stuff. So that’s probably why the sound is a bit more organic or has a disco or Kraut touch to it. And to be perfectly honest, I was a little tired of the techno scene and, in a way, wanted to do some other kind of music.”

To read a full transcript of our interview with Axel Willner, click here.