Here at XLR8R, we often find that our readers have as much passion for the […] 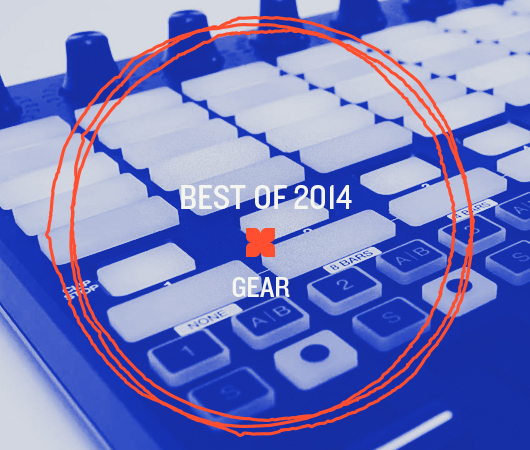 Here at XLR8R, we often find that our readers have as much passion for the […]

Here at XLR8R, we often find that our readers have as much passion for the music they love as they do for learning about the tools and techniques behind it, which is why we aim to provide a steady stream of insight for budding and experienced producers alike with our In the Studio, Artist Tips, and other gear-focused series. That’s also why we’ve elected to close out the second week of our Best of 2014 coverage with a list of the top new pieces of gear to arrive this year. Whether these bits are valued for their innovative approach, jaw-dropping feature sets, impeccable sound, or are just hitting a unique sweet spot somewhere in between, these are the five pieces of production equipment that, for us, stood out above the rest in 2014.

5. Arturia BeatStep
Arturia’s BeatStep is a USB MIDI controller that doubles as a hardware step sequencer with both CV and MIDI outputs. What this means, essentially, is that the BeatStep can be used, sans computer, to sequence hardware drum machines and synthesizers. With 16 steps and key, scale, swing, and timing controls, the compact unit is plenty capable of accomplishing a number of tasks; and it certainly helps that the pads are pressure- and velocity-sensitive for when one needs to punch in notes instead. Over the past year, the BeatStep has become increasingly popular with folks throughout the modular community as a portable controller (thanks in particular to its CV output), but whether one’s production set-up is hardware- or software-based, it’s tough not to find a use for this immensely portable piece of kit.

4. Elektron Analog Rytm
An Elektron drum synthesizer with MPC-style controls, the Analog Rytm is one of the boutique Swedish company’s most compelling pieces of gear to date. The unit boasts an eight-voice analog/digital sound engine (with digital noise/envelopes/LFO), fused with a 13-track sequencer, which all combines with a multi-mode filter and some impeccable send and master effects, which come finished off with that trademark Elektron crunch. Furthermore, the Analog Rytm’s interface should be pleasantly familiar to anyone that’s previously used Elektron gear (and there are some diehards out there), while the engine has the vibe of an 808 or 909. When you want a drum sound, you load the Machine desired, choose a mode, and all the parameters are instantly at your fingertips. In many ways, it recalls Dave Smith Instruments’ Tempest as an all-in-one machine that just begs to be played and mastered.

3. Moog Sub 37
Moog’s latest monophonic synthesizer is one of its most feature-packed instruments to date. On the surface, it’s familiar, as the hallmark Moog wood paneling bookends the solid metal chassis, upon which rest 37 aftertouch- and velocity-sensitive keys. Particularly unique is its paraphonic Duo Mode, however, which allows the Sub 37 to play two independent pitches (one from each oscillator), both of which are then sent through the juicy Moog 20Hz-20kHz ladder filter. Moog added an arpeggiator here as well, complete with a rate knob, tap tempo button, and a slew of pattern and octave variation options. There’s even a built-in sequencer, which lets one create 64-step sequences without any external gear, and further helps make the Sub37 one of the most playable, feature-rich Moog synthesizers to date.

2. AKAI APC40 MkII
Before Ableton’s Push came out—a machine, it’s worth noting, that was also produced by AKAI—the APC 40 was the de facto controller for Ableton Live. While Push certainly changed the game, it is heavy and to a great extent comes with its own built-in workflow. Likely with that in mind, the second incarnation of the APC 40, the APC40 MkII, focuses on portability and live performance. Here, AKAI has transformed the unit’s 5×8 grid from small grey squares to colorful rectangles, with a full RGB color range; this means users can see their clip colors clearly, which makes a big difference in terms of usability (and makes it much easier on the eyes as well). The changes to the APC 40’s form factor have also made it more portable—it’s lighter now, roughly the size of a 17-inch MacBook Pro, and fits into most any bag. A tool more focused on clip launching and modulation than creating new parts from scratch, the APC40 MkII is a machine designed for the live performer, and in its newest incarnation, it’s a controller that seems fit to continue serving as a staple of the electronic music community for the foreseeable future.

1. Roland Aira Series
This year, Roland finally released its modern update to the 808, the TR-8, which captures the beloved sound and workflow of the original, but through rather modern means: something the company calls “Analog Circuit Behavior.” Essentially, the TR-8 is a digital drum machine that uses a new software “engine” to recreate analog circuits in 1s and 0s. Not only does the TR-8 largely succeed in capturing the warmth of the original, the unit also emulates some of the natural wear and tear that actual physical circuits acquire over time—the much discussed “character” that makes every 808 out there its own unique instrument. Truly, the TR-8 is designed with simplicity and live performance in mind. The front panel has an intuitive one-knob/one-function sensibility that makes it easy to understand, and that makes the beatmaking workflow fast and addictive. Every control and function is instantly accessible, and it’s all done without fussy screens or menus.

While the TR-8 is the centerpiece of Roland’s Aira line, the series of modules also includes the System-1 synthesizer (which utilizes “Plug-Out” technology, allowing for different synth engines to be loaded for standalone use), the TB-3 bassline composer, and the VT-3 voice transformer. The machines are all smartly designed to work in concert with one another, and stacking a few of them together makes for even more exciting sonic possibilities. In the end, the Aira series may not have been exactly what analog purists or dogmatic gear heads were hoping for, but for those open minded enough to see the potential in these compact (and considerably affordable) units, the Aira line of gear was a welcome step forward for Roland.