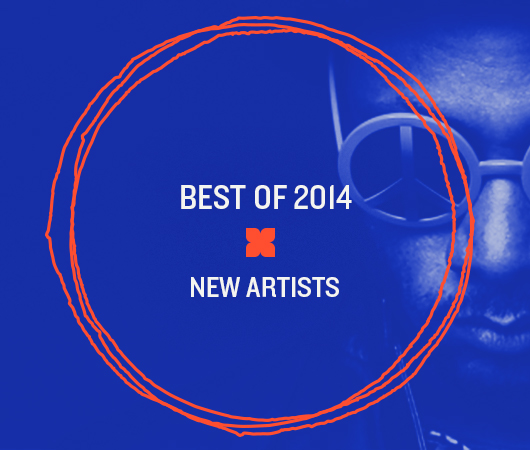 Believe it or not, our Best of 2014 series still has a few chapters left, and today’s installment looks back at the year’s best new artists. Granted, XLR8R is a publication that’s largely dedicated to uncovering up-and-coming acts on a daily basis; our Downloads section is almost entirely populated by track giveaways from emerging producers, and our recurring Bubblin’ Up series regularly shines a spotlight on rising artists throughout the year. That being said, it’s also fair to say that not every new face that appears on our site is going to make a lasting impact. Some beatmakers offer us a quality MP3 and are never heard from again, while other producers create a lot of buzz with a hot debut 12″ or EP, only to disappear into the ether. On the other hand, some acts do manage to stick around and gradually carve their own little niche in the electronic spectrum, and those are the figures we’re focusing on today. We’ve selected 10 artists that continually popped up on our radar in 2014, and while there’s no question we enjoyed what they did this year, their appearance on the list is also based on our prediction that we’ll be hearing a lot more from them in the years to come.

10. Bruce
Two of 2014’s most exciting techno 12″s came from Bruce, the newest artist with a monosyllabic name to rise from the ashes of dubstep (see also Joe, Hodge, Kahn, and the newly christened Pev). All jokes aside, Bruce’s two records on Hessle Audio and Dnuos Ytivil (a.k.a. the sister label to Livity Sound) were some of the year’s finest, both of them filled with brain-melting melodies and twisted rhythms. His productions bridge the uncanny valley, channeling the spirit of dubstep—the sense of dread, the syncopated percussion, the dubwise atmosphere—into the body of techno, sounding remarkably familiar and starkly alien at the same time. They also happen to contain some of the year’s best track titles: “Just Getting Started” and “Not Stochastic” are two examples of British irony at its finest. Bruce may indeed be “just getting started,” but he clearly knows exactly what he’s doing. Chris Zaldua

9. Shanti Celeste
Born in Chile, Shanti Celeste cut her teeth in Bristol’s thriving house scene and has swiftly become one of this year’s most buzzed-about newcomers. As a member of the staff at Idle Hands—the city’s flagship record store-turned-imprint—it’s no surprise that her selections as a DJ have been upfront and largely on point, but she’s also proved to have an ear for production. After dropping her debut 12″ in 2013 on BRSTL, the label she operates jointly with Idle Hands’ Chris Farrell, this year saw her deal out two follow-up EPs showcasing crystalline house productions with pop sensibilities and easy appeal—one for Idle Hands and, most recently, another for fellow Bristolian Julio Bashmore’s Boardwalk outpost. An impressive entry into Resident Advisor’s podcast series also helped boost her profile, meaning Celeste closes out the year with a lot of forward momentum. Jay Donaldson

8. Sage Caswell
Sage Caswell‘s recent Bubblin’ Up feature tells the story of an artist who took some time to work his way into the LA scene and electronic music in general, but is now revelling in a rapidly ascending position in both worlds. The California native has three EPs under his belt now, with 2013’s collaboration with Cromie, “Vines” b/w “Pyrex,” inaugurating Brooklyn’s Peach label prior to his two solo outings this year. The most recent, last month’s “Good to See You” b/w “To Be Continued,” saw him become the first outside artist to release a record on Archie Pelago Music, and consists of three jacking, highly rhythmic, and textural house cuts that bode very well for the future of a producer who’s unlikely to find himself with “outsider” status again anytime soon. Kit Macdonald

7. Matt Karmil
Luck (or at least meeting the right people) has seemingly been key to Matt Karmil‘s ascent this year. As the oft-repeated story goes, the English producer never intended to release his own material and never submitted any demos, but was encouraged to give it a try following a chance meeting with Pampa affiliate Ada in 2013, which proved to be a good move. Having settled in Cologne, Karmil’s production bears the influence of the city’s flagship label—Kompakt—and its signature minimal house and techno, but there’s also a fuzzy, dream-like quality to his work that gives it a uniquely hypnotic flavor. This year also saw the release of his well-crafted debut album via the label’s PNN subsidiary, not to mention a single on Tim Sweeney’s Beats in Space imprint and high-profile remixes for Neneh Cherry and Talaboman. Luck may have played a part, but Karmil has ultimately earned his opportunities on merit alone. Jay Donaldson

6. Jay Daniel
Late last year, Jay Daniel‘s debut EP on Theo Parrish’s Sound Signature label made a huge impression. So much so, in fact, that the Detroit producer was flooded with people wanting mixes and interviews to a point where he felt compelled to ask them to stop, saying “I am not part of your dream” on his Facebook page. People really didn’t seem to like it, yet we’re still talking about Daniel a year later, which is all the more remarkable given that, aside from contributing a prickly workout to Kai Alce’s annual NDATL Special project, he has released but two EPs: one was a collaborative effort with Funkineven on Apron, and the second was Karmatic Equations, a fantastic double 12″ on Kyle Hall’s Wild Oats imprint. Featuring five tracks on four sides of wax, it was stuffed with the sort of ramshackle drums, off-time hits, and serene sense of soul that so defines the 313 area code. “Analog” and “dusty” may be lazy modern-day catchwords, but they’re entirely appropriate when applied than to the work of this outspoken diamond in the rough. Kristan J Caryl

5. Aurora Halal
Aurora Halal wasn’t happy with her city, so she created her own reality within it. When she first started throwing Mutual Dreaming parties in Brooklyn, Williamsburg’s clubs were full of lo-fi rock bands. These days, big dance clubs like Output and Verboten have moved to the borough, so Halal has taken things a step further, co-organizing the 700-person Sustain Release festival in upstate New York. It became this year’s little American festival that could, selling out well in advance, catalyzing the post-L.I.E.S. NYC scene, and producing the kind of ecstatic narratives usually reserved for YouTube comments under footage of the halcyon US rave days. Oh yeah, she also released her solo debut, Passageway, on her new Mutual Dreaming imprint and collaborated with Ital on The Day After EP for Lover’s Rock. Halal is clearly building something, and in the process, she’s prompted plenty of others to dream right alongside her. Matthew McDermott

4. John Barera
John Barera‘s sample-heavy deep house has attracted many followers over the past couple of years, regardless whether he’s appearing via his solo outings, under the B-Tracks guise with Soren Jahan, or together with fellow Bostonian Will Martin (an affiliate of Barera’s own Supply imprint). This year has been especially fruitful for that latter partnership; following from the anthemic “Reality,” an undeniable highlight from Steffi’s 2013 Panorama Bar mix, the pair’s Yen EP confirmed a genuine knack for crafting killer hooks and memorable dancefloor moments. October brought the release of Graceless, the duo’s debut album and inaugural outing for Steffi’s Dolly label, which saw Barera and Martin rise to the challenges of the full-length format while delivering some truly sublime pieces of house music. Jay Donaldson

3. Hashman Deejay
The group of young Vancouverites collectively known as Mood Hut have been releasing records and mixes since 2012, but it wasn’t until this year that people began taking notice en masse of the crew’s languid, spaced-out, and distinctly Pacific Northwestern take on house music. One of the label’s progenitors is Aquarian Foundation member Hashman Deejay (not to be confused with Bluntman Deejay, a different Mood Hut affiliate who also performs as part of the Aquarian Foundation trio), who put out several superb records this year (none of which were on Mood Hut, to keep things complicated). His sound owes a great deal to classic house music from Chicago and Detroit, but there’s a particular kind of hazy tropical sheen over all of his productions, where synthesizer pads seem to last forever and Caribbean rhythms float in and out, giving his songs the feel of lost Balearic relics. It’s the kind of stuff that works brilliantly on a dancefloor, but sounds just as fine at home, where the ambient overtones have a chance to fully unfurl. Chris Zaldua

2. Seven Davis Jr.
Plenty of exciting new artists emerge every year, but rarely do they do so with a sound as unique as that of Texas-born, California-raised, and LA-based Seven Davis Jr. With a background producing in mainstream hip-hop and R&B, and many years in the music business behind him, his excellent and varied releases this year built on the huge momentum of last year’s standout One EP. Now an alumnus of Classic, Funkineven’s Apron Records, and Doc Daneeka’s Ten Thousand Yen, Davis Jr. makes music that really tells the tale of his life; it is at once dark and messed up, weird and abstract—no doubt a result of his previous difficulties with addiction and depression—but it’s also sweetly soulful and positively uplifting, thanks to his irresistibly louche vocals. Beyond that, his funky, scuffed drums and lithe synths betray a passion for artists like Prince, but more importantly, they continue to separate him from the crowd. Kristan J Caryl

1. Pender Street Steppers
Over the past 12 months, Vancouver’s Pender Street Steppers have widely curried favor with their charming take on dusty house grooves, which skillfully incorporates elements of funk and new age. The duo of Liam Butler and Jack Jutson debuted in 2013 with Life in the Zone, a mixtape of all-original material which quickly became a coveted item among those in the know, and this year, a number of those tracks were repurposed for vinyl releases on PPU and the Steppers’ own Mood Hut imprint. While still undeniably lo-fi, both 12″s (not to mention Jutson’s stellar solo EP under the name Jack J) bucked the trend of gritty, saturated techno by incorporating the playfulness of disco, boogie, and early ’90s European house, sounds which all make appearances as part of the pair’s enviable selections in the DJ booth. Jay Donaldson

XLR8R’s Best of 2014 coverage will continue into next week, so check back each day for additional year-end round-ups. In the meantime, don’t forget to take a look at the other Best of 2014 pieces we’ve posted already: