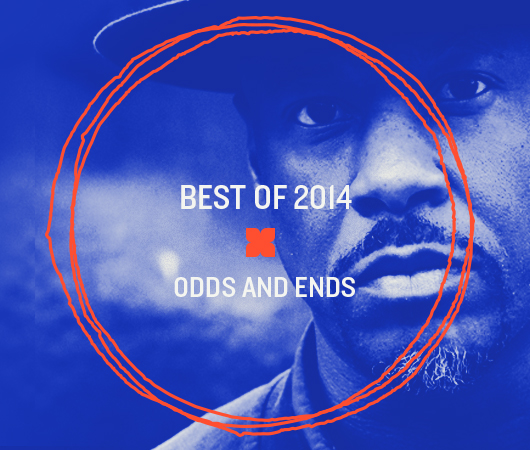 XLR8R‘s Best of 2014 series kicked off exactly three weeks ago, and since then, we’ve toured through quite the collection of year-end rundowns. Today, we’ve arrived at the final chapter, which wraps up both the Odds and Ends category and the Best of 2014 series as a whole. For those who missed the first half (which debuted yesterday), Odds and Ends is essentially a collection of our random thoughts, opinions, and observations from the year gone by. These items may not have fit squarely into a countdown-style list, but we’ve included some things we loved… and some things we didn’t; more importantly though, everything in here left a mark on 2014, and merited one last bit of attention before the calendar flipped to 2015.

Secret MVP: Jordan GCZ
Granted, for those who have already perused the rest of our Best of 2014 selections, this award won’t be much of a surprise, because Jordan GCZ (a.k.a. Jordan Czamanski) made a lot of appearances on our various year-end lists. For many years, he’s been best known for his work as one half of Juju & Jordash, and the Amsterdam-based duo continued to make an impact in 2014, dropping a widely acclaimed new LP, Clean-Cut, via the Dekmantel label. Yet Czamanski didn’t stop there; after kicking off his own label, Off Minor, with a solo 12″ last year, he continued to build on both of those endeavors. His latest solo outing was the Digitalis EP, which arrived on the Future Times imprint, while Off Minor significantly expanded its output by issuing records from Move D, Stump Valley, and Zsa Gang (a collaboration between Czamanski and Maxmillion Dunbar), along with a 12″ from the Magic Mountain High project, which brings together Juju & Jordash and Move D. In a way, Czamanski was everywhere this year, and yet he managed to do so while largely staying beneath most people’s radar. It’s an impressive feat, and while he likely won’t be able to operate with as much anonymity in the years ahead, we anxiously look forward to his future campaigns. Shawn Reynaldo

Too Many Cooks: SBTRKT’s Wonder Where We Land
“I started this in London with an idea I recorded on an upright piano, took this to Los Angeles (set up at Flea’s The Boat Studio in Silver Lake) collaborating further with Stella (drums) and Emily (vocals) from Warpaint. [I] took this back to London to work more arrangement ideas to it and finally, a couple months later, took that to New York (Downtown, where The Roots were in the studio next door!) and collaborated with A$AP Ferg.” This is how SBTRKT himself described the creation process of “Voices in My Head,” the closing cut from his sophomore LP. It is also indicative of where the record likely went wrong—there are just too many ideas on Wonder Where We Land to make sense of. One can’t help but wonder if the many doors SBTRKT opened with his wildly successful debut album ultimately opened up too many possibilities for the second, and the UK producer simply couldn’t manage to say “no” to enough of them. After all, piecing together a coherent effort while featuring Vampire Weekend’s Ezra Koeing, Charlift’s Caroline Polachek, Denai Moore, A$AP Ferg, and Raury would have been a difficult task for anyone, and SBTRKT also had to find room for more familiar previous collaborators like Sampha and Jessie Ware. Combined with the LP’s piecemeal production methodology, this jumbled approach resulted in an album that tried to involve too many places, people, and things at once; it’s no surprise that Wonder Where We Land struggled to find any real source of identity across its 15-track run. Glenn Jackson

Going out on Top: Trouw
We love Trouw. That won’t shock anyone who’s read our gushing reviews of the Amsterdam nightspot over the years, but it’s a sentiment we feel compelled to repeat again and again, especially in the face of the club’s imminent closure. From the beginning, Trouw’s founders knew that they only had a limited timeframe to work with, but that doesn’t make the venue’s demise any easier to stomach. Simply put, it’s one of the best clubs on the planet, and its forthcoming absence will leave a gaping hole that extends well beyond the Amsterdam music scene. It would have been easy for the Trouw team to rest on its laurels and blithely cruise into the sunset, but the club’s organizers have spent the past several months largely doing what they always do: putting on incredible, forward-thinking events. Sure, there have been some nostalgic asides—a retrospective book, a tribute compilation LP, an official goodbye video, etc.—but none of these efforts have come across as overwrought or overly self-indulgent. After all, there will be plenty of time to mourn Trouw once it’s gone. In the meantime, there’s still partying to be done, including a marathon final event during the first weekend of January. Shawn Reynaldo

Most Suspect Intersection of Music and Technology: Kuvo
Back in October, Pioneer announced the launch of Kuvo, a cloud-based app and social platform that not only enables DJs to broadcast a tracklist of what they’re playing, but also encourages users to follow along, either in real time or after the fact. Launched amidst a sizable amount of fanfare and under the guise of both sharing information and helping to get artists paid (the idea being that these tracklists will assist in the royalty collection process), Pioneer seemed to think it was bringing something revolutionary to the market. That notion hasn’t been realized just yet, although efforts are presumably being made to gradually spread Kuvo’s use to more artists and clubs around the globe. For our part, we couldn’t help but notice that the application and platform were rife with potential pitfalls, which we attempted to address in an interview with a Pioneer product rep at this year’s Amsterdam Dance Event. In our mind, Kuvo seems like something geared toward people in the industry who are looking to maximize profits, rather than create the best possible club experience. (More simply, it’s hard to support anything that encourages folks to spend more time staring at their phones on the dancefloor.) Only time will tell what kind of real impact—if any—Kuvo will eventually have on nightlife, but for now, we’re still looking at it with a healthy dose of skepticism. Shawn Reynaldo

Best Web Video Series: Music Nation and Digging in the Carts
Throughout the year, we try to share some of the best, most informative pieces of content we come across on the web, and quality video series often prove to be especially rewarding. Of those, there were two that truly deserve a proper revisit: Channel 4‘s and Dazed‘s Music Nation documentary series and Red Bull Music Academy‘s Diggin’ in the Carts. The former profiled the rise of various essential British musical movements (jungle, grime, bassline, UKG, and more), while the latter delved deep into the history of videogame music, enlisting commentary from the likes of Flying Lotus, Kode9, Fatima Al Qadiri, J-Rocc, and others, including the actual Japanese music makers themselves. In both series, the videos came with a combination of in-depth commentary and quality filmmaking that landed them right in the cross section of nerdy entertainment and musical education. Our favorite episode from each has been included below, but the entire Music Nation series can be found here, while all six episodes of Diggin’ in the Carts can be watched here. Glenn Jackson

Diggin’ in the Carts – Episode Five: The Role of Role Play

Album That Sounded Nice, but Also Sounded Like a Really Long Car Commercial: Tycho’s Awake
There was maybe no record as unwaveringly pleasant in 2014 as Awake, Tycho‘s guitar-soaked return to the Ghostly fold. Each of the record’s eight tracks came lined with an air of comforting optimism, their propulsive rhythms and soaring melodies seeming to indicate that no matter what has happened to the listener before, one can always take life into their own hands and change whatever comes next. The music is not bad, per se—it’s even somewhat enjoyable as background music—but it is exactly the sort of thing one would expect to hear in a vaguely uplifting car commercial.

Take the single “See” for instance; its initial indie-meets-disco beat, light guitar strums, and sprinkling of uplifting melodies could soundtrack the beginning of any adventure-driven car commercial. Maybe we see a young couple packing up its things, loading them into the car, and launching down the wide-open road. Then, the breakdown hits, acoustic guitar floats in underneath, and we cue a slow-motion montage of an unforgettable road trip: camping, visiting new places, and exploring the great outdoors. The snare sneaks back in, building back towards the tune’s driving current just as it sinks in: all this could be yours if you just… buy a Camry. Glenn Jackson

Surprise Backlash of the Year: When We Said That Drum & Bass Had Spent “Nearly a Decade in Dance Music Purgatory.”
In July, Fracture (pictured above) turned in an excellent mix for the XLR8R podcast series, and much of our write-up in the post was devoted to how the UK producer was part of a wave of artists revitalizing drum & bass through hybridization and experimentation. And while that notion didn’t seem to ruffle many feathers, the article began with the phrase “After nearly a decade in dance music purgatory, drum & bass and jungle have gradually worked their way back into the spotlight,” which sent the drum & bass scene into something of a tizzy. Admittedly, things that get posted on XLR8R occasionally get people riled up—oddly enough, the drum & bass crowd often seems to be particularly sensitive—but we were honestly not prepared for the small firestorm that erupted in the wake of this podcast. dBridge himself weighed in, penning a lengthy essay that passionately defended drum & bass and called us “bloody daft” in the process.

Now, it’s never fun to be raked over the coals by a veteran artist, especially one whose work we wholeheartedly support. (For what it’s worth, we had dBridge himself do a podcast for us in 2013.) But it’s worse when the whole thing happened because of what seems to be a misunderstanding of what we said. After all, “purgatory” doesn’t mean “dead.” In retrospect, it wasn’t the best word choice, but we simply meant that the drum & bass scene had spent several years in a state where it was less popular and received less attention than it once had at its height. Obviously, interesting music from the genre had been made during that time, but it seems indisputable that the music’s influence had waned somewhat outside of the music’s core fans, artists, and labels.

Regardless, the real point is that we were (and still are) excited about what’s been happening with drum & bass and jungle in recent years. More producers are experimenting with the genre than ever before, many of them coming from scenes and backgrounds well outside of the music’s traditional fanbase. For a long time, it felt like drum & bass was operating in its own orbit, and now it’s mixing with footwork, grime, hip-hop, and more. This sort of creativity is something we support, and plan to keep documenting in the months and years ahead. Shawn Reynaldo

XLR8R’s Best of 2014 coverage concludes this week, so keeping checking back for our final year-end round-ups. In the meantime, don’t forget to take a look at the other Best of 2014 pieces we’ve posted already: