In case you haven’t noticed the barrage of Ninja Tune-related content as of late, XLR8R […] 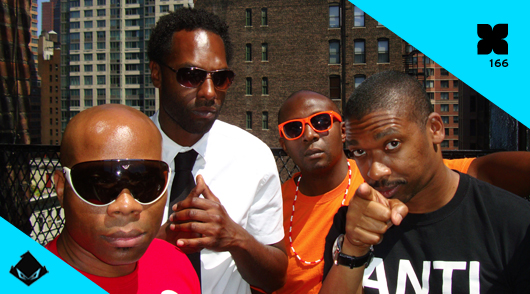 In case you haven’t noticed the barrage of Ninja Tune-related content as of late, XLR8R […]

In case you haven’t noticed the barrage of Ninja Tune-related content as of late, XLR8R has been helping the London- and Montreal-based label celebrate its 20th anniversary. Part of that includes a month-long series of exclusive Ninja Tune podcasts, and this week’s edition comes courtesy of seminal NY experimental hip-hop outfit Anti-Pop Consortium. More specifically, the mix was assembled by Anti-Pop member High Priest, who has stayed true to the group’s pioneering sonic spirit and put together a futuristic collection of hip-hop tunes—including plenty of tracks of his own and from fellow APC member M. Sayyid—that casts aside the genre’s usual limitations. He’s also managed to do so while slipping in a few gems from more “commercial” acts like Dr. Dre, E-40, and Jadakiss, all without sacrificing the integrity of the mix. More than a decade after Anti-Pop’s initial formation, it appears the guys are still capable of breaking new ground. Take a listen, and remember to check back every Thursday in October for more Ninja Tune podcasts. Also, make sure to take a look at XLR8R‘s Ninja Tune XX microsite for more exclusive content, Ninja Tune XX event info, and plenty of other celebratory goodies.