A weird and wonderful audible experience from the influential German figure. 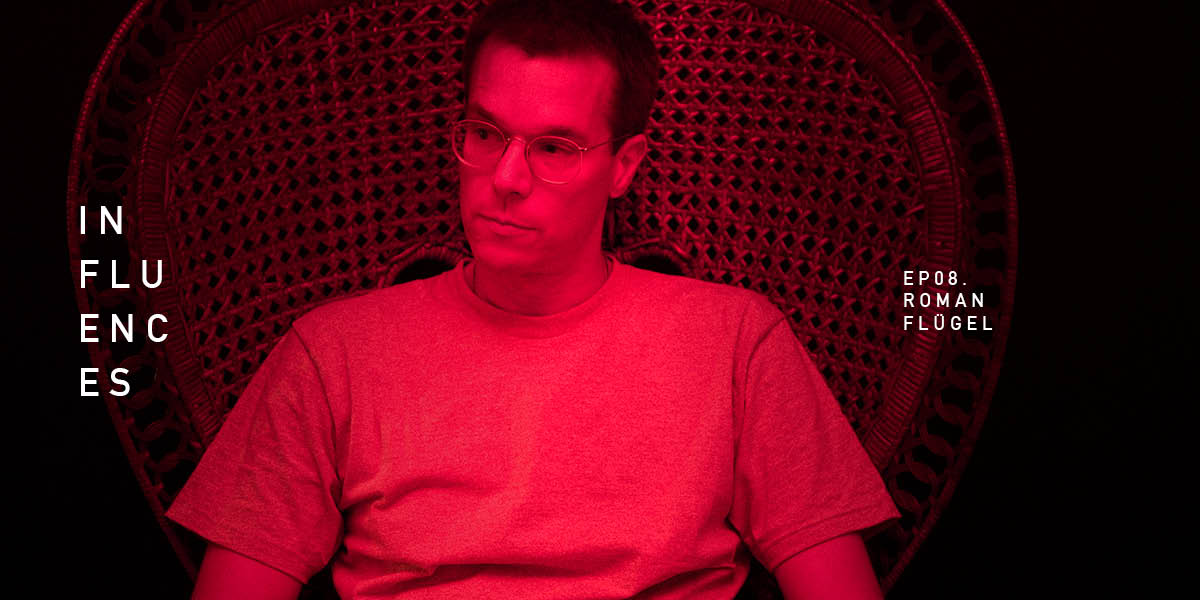 A weird and wonderful audible experience from the influential German figure.

Few contemporary electronic artists stir up as much intrigue as Roman Flügel. The German artist is a long-time and highly influential figure in these musical circles, but also one that’s forever been hard to pin down. “I enjoy the surprise,” Flügel says about his DJing, “that’s why it’s difficult to describe what I do.” But with a career spanning nearly 30 years and showing little signs of slowing down, discussing contemporary house and techno’s evolution without a mention of Flügel’s contribution is nigh on impossible.

Flügel’s relationship with music began many years ago in Darmstadt, on the outskirts of Frankfurt. For Christmas 1987, Roman’s older brother gifted him DM/STREETSOUNDS’ Chicago Trax compilation, the spark in a long-standing affinity with vibrant and melodic electronic sounds—opening “Pandora’s box,” reads his profile. This later inspired a move to Frankfurt, where he enrolled in a Musicology course and spent a lot of time engaging with the city’s nightlife community. He was a regular in Sven Väth’s renowned Omen club, where he discovered the legendary Warp or Underground Resistance label nights.

He spent his late adolescent years collecting a vast array of musical equipment and experimenting with sound design, and soon gave a demo tape to Jörn Elling Wuttke, a well-known face in Darmstadt’s music scene with whom Flügel has gone on to collaborate on many projects, perhaps most notably Alter Ego and Holy Garage. Having helped establish the Klang Elektronik, Ongaku, and Playhouse labels in the early ’90s, Flügel quit his studies to focus on music. “It seemed obsolete somehow, just to be analyzing church sonatas all day when there were so many interesting things going on around me,” he recalls. “When, on top of that, the only semester on modern music was cancelled that year, I decided to leave the university.”

He’s since gone on to release under a plethora of aliases and orchestrated many successful collaborations. Much of his solo work has arrived on Dial, including three full-lengths; while he released his first LP on Playhouse, the now legendary imprint that has released iconic records by Isolée, Ricardo Villalobos, and LoSoul. Elsewhere, his work as Eight Miles High and Ro 70 show his quieter side, while the remixes (e.g. for Daft Punk, The Human League, Primal Scream, Pet Shop Boys, Kylie Minogue) evidence the work of a brilliant and singular musical mind. And this is only really scratching the surface of a career that also includes various high-profile mix CDs and DJ performances, showcasing a versatility and originality that is so often lost.

His XLR8R Influences mix is just another glimpse into Flügel’s mind. In truth, we had no idea what to expect—bleeping house, quirky techno, futuristic Italo-disco, abstract electronica, or even something completely different. But instead, Flügel looked back and selected some of the songs closest to him—a collection of “audible experiences” that he feels “hunt” his mind on a subconscious level. Listen carefully, and you can hear much of this material’s peculiarity in Flügel’s work.

“Music has been my companion since I was a child. I like to see it as a big puzzle or mashup with thousands of pieces. But what is connecting the dots? I think music is some kind of emotional amplifier that is reaching beyond what words can express. That’s why I enjoy music that (at least) I consider as unique, weird, and soulful whether it be jazz, rock, electronic, or classic. My podcast is trying to connect some of the audible experiences of my life that are constantly hunting my mind on a subconscious level and maybe manifest somewhere in my own catalog.”— Roman Flügel

“Magic Fly” sounded very futuristic for a seven-year-old back in 1977. Disco music was all over the place on television shows and someone in our family invested a fiver for this irresistible 7″. I was hooked on the spot!

I’ve been a fan of Moondog’s music for many years but discovered this one in particular just recently when Eris Drew picked me up from the airport before my last gig at Chicago’s Smart Bar. You can learn so much if you meet people with an impeccable taste in music.

The movie “Wild Style” presented hip-hop and graffiti to a wider audience in Germany when it came out in 1982. Luckily my brother bought the album soundtrack and I was able to discover something I had never heard before: scratching. A few years later I was able to put the album in a wider context and what I love about it until today is it’s very specific sound (besides the amazing overall groove of course).

Radio chart shows played a major role when I was young. You’d wait for your favorite song to be played and then press the record button of your cassette recorder in the right moment to “own” it. Suddenly there was something new happening in West Germany called “Neue Deutsche Welle” and some of the music made it into the actual charts. DAF’s “Der Räuber Und Der Prinz“”(The Robber And The Prince) was one of these rather very weird sounding tracks. I got the album Alles Ist Gut (Everything Is Good) that contains “Der Räuber…” and “Rote Lippen” as a present on my 11th or 12th birthday and it’s still some of my favorite music of all time. The production by Conny Plank is ace and nothing similar had been recorded before and maybe even after.

I discovered the music of Yo La Tengo at a very specific, let’s say unhappy period of my life and it eased my pain. Their sensible approach as a band made guitar music attractive again after I refused to listen to guitar music for almost all of the ’90s. They are still one of the great bands of our time and continue to release amazingly beautiful albums.

For a short time, break dance was huge when I was a teenager. “Mirda Rock” still sounds fresh and funky using various synths and vocoder-driven voices. But what I love most about it is the combination of Roland TR-808 and Simmons drums.

07. Arthur Russel “The Platform On The Ocean”

What’s great about Arthur Russel’s music is that it is hard to pin down. Dance? Maybe. But it is so much more. An ocean of artistic creativity paired with a unique ear and heart.

Maybe it’s hard to explain for anyone who’s not speaking German. But this band from Hamburg was the hottest alternative German band in the mid-’90s, not only because their lyrics were out of the ordinary. It was an interesting time became independent rock and electronic music finally gained a certain amount of interest for each other. Especially in Hamburg where the label Ladomat released some of my records as Roman IV or Sensorama (with my long time studio partner Jörn Elling Wuttke) back then.

09. Prince “The Ballad Of Dorothy Parker”

I was sitting at David Moufang’s house in Heidelberg when we were making music together around 1997. Those day and night sessions could go on for some time and at a certain point while taking a break, David played me “The Ballad Of Dorothy Parker” by Prince saying it would be in his opinion “one of the best pieces of music Prince had ever written.” It totally blew me away. The arrangement, the story that’s being told, those Linn drums… just incredible.

The beauty of filth!

The discovery of the label Irdial Discs was like exploring a new planet of sound. Everything was different. Not just the music but also the look. The attitude. Even today I don’t “understand all of the records I bought from the Irdial catalog but they’re all great.

The first time I listened to this music was a few years back when I was sitting in a taxi in Paris. It took me to the airport right after I played at the legendary Pulp with Jennifer Cardini. The North African driver listened to a whole CD of this band, which he told me was coming from Morocco. I told him how beautiful it sounded to my ears. Actually I was really touched by this. He turned up the volume and as we reached Charles De Gaule airport, he handed me the CD as a present.

When Kraftwerk’s album Computerwelt came out I was just attending high school. A friend of mine got it as a birthday present from his uncle and told us to have a listen. I’ll never forget the immediate impact the album had on me. I must have listened a thousand times to the cassette copy on my Walkman, trying to understand how that music was recorded and produced. “Taschenrechner” in particular introduced me to the possibility of “noise” in music.

What can I say? Brian Eno is simply one of the greatest.

Even though I have stopped playing the classical piano some years ago, I still like listening to classical music sometimes and J.S. Bach never let’s me down.

Lodger, the album from which “D.J.” is taken is probably my favorite Bowie album. Listening to this song helps me to not take myself too seriously, and even though the idea of what a DJ is maybe has changed drastically since the release of Bowie’s song in 1979, there’s still truth to find in the description of the sometimes glamorous but tragic life of a D.J.