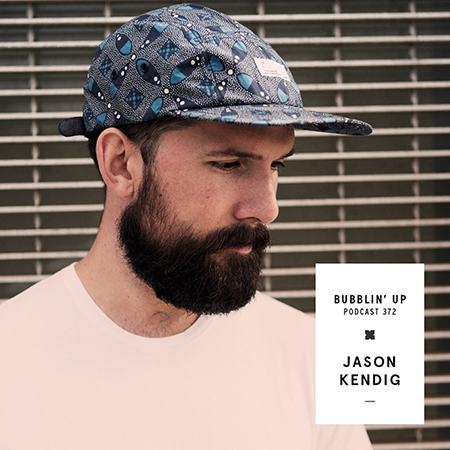 Exactly one year ago, our 2014 edition of Bubblin’ Up Week took an in-depth look at San Francisco’s Honey Soundsystem; since then, the queer electronic music collective has exploded. The crew continues to be responsible for the best parties in San Francisco, but its individual members are also making an impact that extends well beyond their hometown. Josh Cheon’s Dark Entries imprint has essentially become a buy-on-sight enterprise, resulting in label tours that have taken him around the globe, often with fellow Honey resident Robert Yang (who performs as both Bezier and Robot Hustle) in tow. Jackie House and her platinum wig have become fixtures on the club circuit, while her sassy persona also prompted our decision to make her an official XLR8R columnist. Yet it’s Jason Kendig who regularly garners the most praise for his work in the DJ booth. Simply put, he’s a world-class selector, which is why we invited him to put together an exclusive mix for our podcast series. (We’re not the only ones to take notice; just a few days ago, he played at Berghain as part of the club’s marathon New Years celebration.)

Kendig came of age in Detroit, and first sharpened his DJ skills in the city’s club scene during the late ’90s and early ’00s, frequently spinning in both straight and gay clubs. Still, it was only after coming west, settling in San Francisco, and linking up with Honey Soundsystem that he truly found his artistic voice. Many of his peers with Midwestern roots are known for their raw, rough-and-tumble approach to mixing, but Kendig is something of a surgeon, taking pride in constructing—and sustaining—long blends in which it’s hard to decipher exactly where one track ends and the next begins. This attention to the craft is impressive in and of itself, but Kendig is much more than a mere technician. His knowledge base runs deep, allowing his sets to glide effortlessly between house, techno, and disco. There may be a classic bent to his selections, but he’s no stodgy traditionalist—his podcast here features plenty of new tunes.

Clocking in at just over an hour, Kendig’s mix is impeccably assembled, but more importantly, it’s incredibly listenable. The tunes on offer are perfectly suitable for the dancefloor, but there’s also a relaxed sensibility to the proceedings which should make the podcast equally enjoyable for someone who’s plodding away at their desk while the mix plays in the background. Kendig moves briskly through 18 tracks, yet the podcast never feels hurried or rushed, even when he breaks out some chunky acid rhythms about halfway through. It’s tempting to veer into hyperbole, but we’ll just say that this is an incredibly well done mix, not to mention an excellent showcase of Kendig’s talents. We’ll undoubtedly be hearing more about him in the year ahead, but for now, it’s a thrill to have him kick off 2015 on XLR8R.